In a paper in the journal Fuel, they report that among the catalysts, Rh/C showed the highest performance for sulfur removal from the resulting upgraded oil (UPO). With Rh/C, the effects of other reaction parameters, such as temperature (350–450 °C), catalyst loading (1–20 wt%), reaction time (30–150 min), STO/WEO mass ratio (0:5–5:0), and initial H2 pressure (0.1–9 MPa), on the yield and property characteristics of the UPO were optimized. 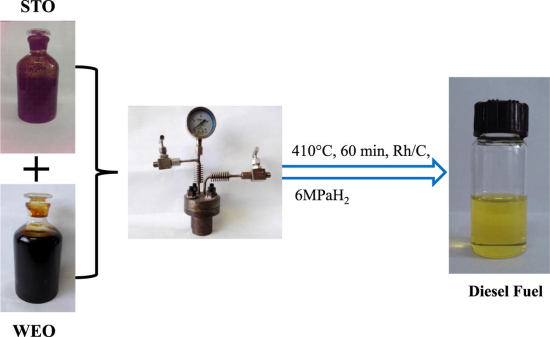 The STO/WEO mass ratio and initial H2 pressure were the two main parameters that markedly affected the yield and property characteristics of the UPO. Using WEO as the reaction medium not only made the recovery of the UPO easier but also converted WEO into a major component of the UPO. WEO also suppressed coke formation and thus prolonged the lifetime of the catalyst.

The UPO dominantly consisted of hydrocarbons (saturated and unsaturated) and aromatics whose contents were predominantly affected by the STO/WEO mass ratio and were very close to the mixture proportions of jet fuel and light diesel.

With the vigorous rise of the transportation industry, scrap tires (STs), which were once called “black pollution”, have become a critical threat to the human environment. Approximately 5 × 106 tons of STs are discarded each year. Unfortunately, approximately 65–70% of those STs are dumped legally or illegally in landfills or suffer from direct exposure to air. Eventually, this disposal causes severe environmental contamination and high value-added material loss. One alternative way to address these issues of ST management is to transform STs into fuels and other useful chemicals via thermochemical techniques such as combustion, pyrolysis, gasification, and liquefaction.

In general, the thermochemical conversion of STs is a thermal decomposition process that produces recyclable solid, liquid and gaseous products. The liquid-state product, generally called oil, is one of the most promising feedstocks for use in fuels or chemicals. However, this kind of oil is usually characterized by high viscosity and high contents of N and S atoms. Therefore, additional processing is necessary to further decrease the N and S contents and viscosity of this oil prior to its utilization.

Currently, hydrotreatment is one of the most popular methods for the upgrading of bio-oil. This method simultaneously involves hydrodesulfurization (HDS), hydrodenitrogenation (HDN), and hydrodeoxygenation (HDO) to eliminate S, N, and O heteroatoms in the forms of H2S, NH3, and H2O, respectively, from bio-oil.

… Recently, considerable and increasing attention has been paid to the management or reuse of waste lubricating oil, particularly engine oil. According to statistics from the Chinese transportation industry, 25–30 million tons of waste engine oil (WEO) are produced every year, which can cause serious environmental contamination if the WEO is improperly disposed of. WEO, which has been suggested to be a promising medium for bio-oil upgrading, can not only enhance the mutual solubility of bio-oil and WEO but also reduce the generation of carbon deposits. In addition, WEO can be converted into the final product oil.

Therefore, in the present study, WEO was used as a medium for scrap tire oil (STO) upgrading.

The researchers concluded that co-hydrotreatment of STO and WEO blends is an effective way to obtain liquid fuel that can be used directly for combustion or act as a cofeeder for a petrochemical refinery. They found that the WEO could also be recovered as a major fraction of the UPO and used to adjust the relative proportions of the UPO components by varying the initial STO/WEO mass ratio.

The UPO mainly consisted of saturated hydrocarbons and aromatics, and its naphtha, jet fuel, light diesel, and heavy diesel fractions could be adjusted by varying the reaction parameters. Given these encouraging results, we suggest that the co-hydrotreatment of STO produced from hydrothermal liquefaction of STs and WEO is a promising way to reutilize two kinds of solid and liquid wastes at the same time.

Two troublesome waste streams, one process, one product.  What's not to like?

The photo above shows H2 is added as the 'hydro treatment after heat treatment(s?) to 450oC over 5 different catalysts.
As you would expect to see much of the necessary infrastructure at current oil refineries you could say this process can help close the loop(s). Recycled waste oils have been shown equal to virgin base.
Not sure how contamination affects the processes but presume fats and cooking oils etc would be accommodated well.

It will bring a much needed new industry if it can help convert the scrap tyre mountains.
I guess there will be other valuable product steams as sulphur steel etc for reuse as while saving costly and toxic landfill.