The BMW Group’s worldwide spare parts logistics center in Dingolfing has recently started piloting autonomous transport platforms. The electrically powered AutoBox helps to move incoming spare parts efficiently from the freight dock to the warehouse. With a deck space of almost 20 square meters, the AutoBox can transport 20 lattice boxes with a total weight of up to 20 tons—corresponding to the weight and volume with which a conventional tugger train is loaded. 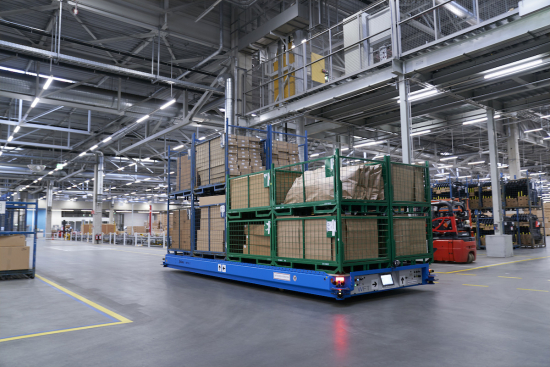 At the Dingolfing dynamic center, the AutoBox complements the use of manual tugger trains on long routes between goods receipt and the warehouse. The pilot deployment of autonomous transport systems and other logistics innovations will help us to optimize intralogistics processes and thus safeguard the future viability of BMW Group Aftersales logistics.

The aim of the AutoBox pilot project is to automate long distances in the Dynamics Center using the transport platform and to connect more distant parts of the building. With the AutoBox, complex intralogistic flows of goods and rising demand in the aftersales area can be managed efficiently.

The logistics of the future will be significantly influenced by autonomous transport systems. For this reason, we are already testing the technologies of tomorrow under real conditions and building up important skills in our team. With the AutoBox we are testing out an important component of our future strategy in Dingolfing.

—Marco Prüglmeier, head of Industry 4.0 and Innovations in Logistics

Humans load the AutoBox with incoming parts. The transport platform then moves through a roller shutter door in the direction of the order-picking warehouse, where the parts are temporarily stored before being dispatched to the customer.

The AutoBox uses four navigation scanners to orientate itself independently in space; therefore, there was no need to modify the existing building structure, as was previously the case with driverless transport systems.

A further eight passenger and collision protection scanners ensure accident-free travel through the mixed traffic in the Dynamics Center. At the same time, these sensors are used as vertical surface scanners and prevent unauthorized access to the air cargo security area.

Due to the omnidirectional drive, the platform can also maneuver around tight bends and into small loading bays. Having arrived at the picking warehouse, the electrically powered AutoBox automatically parks and automatically starts the battery charging process.

The AutoBox pilot project is part of a series of autonomous transport systems currently used at various BMW Group locations. For example, the BMW Group Leipzig plant is piloting the AutoTrailer to transport the truck trailer autonomously from the parking space to the unloading and loading station.