The eighth-generation of the bestselling Volkswagen Golf bestseller will feature a 48V mild hybrid electric drive system. In 2018, Volkswagen announced at the Vienna Motor Symposium that it would make the innovative low-voltage concept accessible to a broad public.

The Group is now delivering on its promise and bringing the technology into series production this year with the eighth generation Golf, one of the best-selling vehicles in the world. Initially, the 48V hybrid drive will be available with the EA211 evo family, 1.0 and 1.5l displacement and dual-clutch gearbox (DSG). 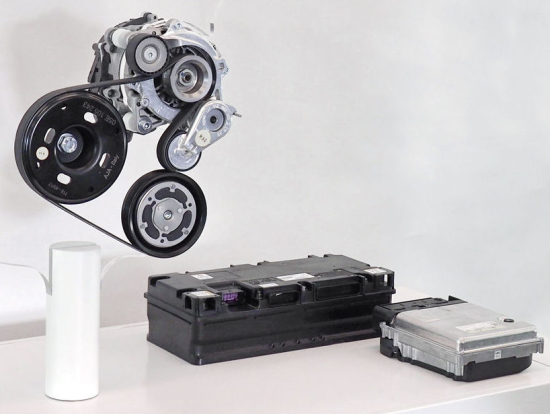 Volkswagen will then gradually extend the electrification of the drive system to the entire fleet.

Compared to current Plug-in Hybrids (PHEV), for example in the Golf GTE and Passat GTE, the MHEV drive equipped with 48V technology offers a reduced range of functions, but is significantly more cost-effective. While the Plug-in Hybrid (PHEV) charges the battery via the grid with a plug, the MHEV does not have a battery that can be recharged via a plug, but is equipped with a 48V belt starter generator.

As an electric motor, this supports the combustion engine in order to increase the drive power according to the situation—for example when accelerating. In deceleration phases, the generator converts the vehicle’s kinetic energy and charges the battery with energy that would otherwise be lost. This combination offers Volkswagen the opportunity to electrify conventional powertrains without making major changes. Depending on the driving style, the MHEV system can save about 0.4 liters of fuel per 100 kilometers.

In the mHEV engines offered in the new Golf, the Belt-Driven Starter Generator (BSG), an electric motor with 48V operating voltage, acts as a powerful replacement for the generator. When starting up, it also boosts the drive torque via the boost function, thus ensuring greater dynamics and comfort. 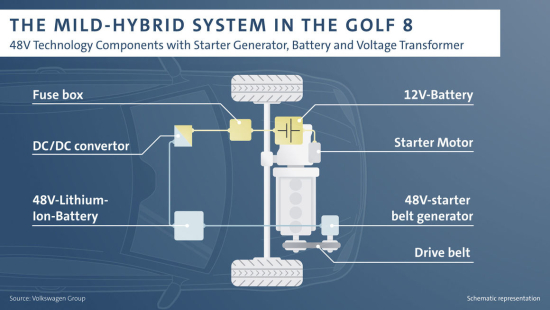 The starter generator is coupled to the combustion engine. Its power is transmitted to the crankshaft by the belt drive. In addition to the regular 12V on-board battery, the mHEV drive has a 48V lithium-ion battery mounted under the passenger seat. When the driver steps on the brake, the kinetic energy is converted into electrical current. This allows up to 40 percent of the braking energy to be recovered and stored in the battery. A DC/DC converter supplies the conventional 12V grid with voltage.

The 48V mild hybrid offers a number of helpful system functions. In FMA (Freewheel, Motor Off) mode, the engine shuts off as soon as the driver takes his foot off the accelerator. The car then continues without consuming fuel. The engine is also hardly noticeable as soon as it is restarted. It is switched on and off without delay or loss of comfort, making the new Golf more efficient.

To ensure that the driver does not feel any loss in driving comfort, the system has a “Change-of-Mind-enabled” Comfort Start function. This means that if the driver presses the accelerator pedal again, the combustion engine starts immediately, with very few vibrations. This is another advantage of the BSG: in contrast to the sprocket starter, the driver experiences a quick and comfortable transition to the drive phase when starting.

On 48V mild hybrid vehicles, however, the sprocket starter is only used for the first start. In contrast, the driver experiences a comfortable, fast and powerful transition when starting with the BSG—for example from sailing to a subsequent drive phase.

In order to use FMA operation as frequently and efficiently as possible, a predictive assistance function takes into account navigation data such as speed limits or bends in order to reach route points at the optimum speed and thus make the best possible use of the vehicle’s kinetic energy.

For the year 2030, Volkswagen expects an electric share of its new vehicles of around 40% in Europe and China. The proportion of new vehicles with combustion engines will therefore continue to dominate for a long time to come. However, the efficiency of combustion engines is reaching its physical limits—which is where 48V technology will open new avenues up.

Disappointing that VW is predicting "...combustion engines will therefore continue to dominate for a long time to come." When on the other hand they are producing PR for EVs that lead you to believe EVs are imminent.

A minor improvement over current equivalent ICEVs but not good enough.

Here are the best (lowest consumption 2019 non-plug-in Hybrids) according to Transport Canada:

VW is producing 10 milions vehicles per year, it WILL take the long time for EVs to take the ICEs place, no mater what. It certainly is better to develop ICE further than just leave it where it is.

But I'm questioning this 48V systems on top of already complicated DI Turbo ICEs with DCT gearboxes. In the end this will not come out as a cheap and simple system. I'm advocate of strong electrification and mechanical simplicity, new Corolla hybrid is already cheaper than Golf TDI DSG alone, what will this 48V system add? Toyota system is proven to last, where the DSG gearbox isn't really a synonym for reliability and how long will that 48 V li-ion battery last? A lot of unknowns in terms of reliability.

Then there is driving experience, the VW 48V system is already available in Audi and I'm not exactly reading pleasant reviews about it. The 48V system is not strong enough to provide instant throttle response and in the name of fuel saving this system shuts off the engine when coasting, so a turbo engine will have even more lag than it already does. Yes speculation, I know, we will just have to wait and see how Golf does it.

This type of mild hybrid is a load of BS and nothing more.
A disc-motor-generator mounted at the end of the crankshaft would function as a motor-starter and would generate power to charge the battery in recuperation mode; a further mode would be start / stop function. Such a solution would be truly beneficial and acceptable and eliminates the fuddling mechanics of belt drives screaming for maintenance. Do they employ engineers at VW or just super managing idiots with the capabilities of Winterkorn??