Low-speed electric vehicles (LSEVs) could reduce China’s demand for gasoline and, in turn, impact global oil prices, according to a new issue brief by an expert in the Center for Energy Studies at Rice University’s Baker Institute for Public Policy.

“Low-Speed Electric Vehicles: An Underappreciated Threat to Gasoline Demand in China and Global Oil Prices?” is authored by Gabriel Collins, the Baker Botts Fellow in Energy and Environmental Regulatory Affairs at the Baker Institute.

Disruptive innovation is typically a Silicon Valley buzzword and not one commonly associated with discussions of gasoline markets. Yet the past several years in China have seen the emergence of a potential disruptor: low-speed electric vehicles. These little vehicles typically lack the aesthetic appeal of a Tesla, but they protect drivers from the elements better than a motorcycle, are faster than a bicycle or e-bike, are easy to park and charge, and, perhaps most endearing to emerging consumers, can be purchased for as little as $3,000 (and in some cases, less). 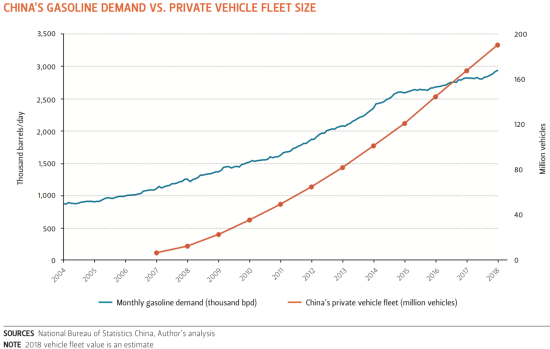 Depending on how proposed government regulations of the sector unfold in 2019 and beyond, sales could rise significantly as low-speed electric vehicles penetrate deeper into lower-tier markets where motorcycles and bicycles remain the prevalent means of transport, as well as into the increasingly crowded urban areas where space is at a premium and many residents still cannot afford larger vehicles.

If a million low-speed electric vehicles displaced a million gasoline-powered midsize sedans from the market, about 15,000 barrels per day of gasoline demand could effectively be lost, Collins said. At the current estimated low-speed electric vehicle fleet size, the potential fuel demand displacement could exceed 60,000 barrels per day—2% of current total Chinese gasoline demand.

The fact that low-speed electric vehicles in China have thus far been the only electric vehicles worldwide that have successfully sold at industrial scale without unsustainable levels of government financial support suggests that they are a wild card worth watching. This is particularly true given China’s outsized importance as the global ‘oil consumer of last resort,’ as well as the fact that if low-speed electric vehicle manufacturing capacity scales up in China, manufacturers are likely to begin targeting export markets in Africa, India and Southeast Asia. These regions have many of the same characteristics as rural China in terms of no prior car ownership history and low-income levels that often make ‘conventional’ cars prohibitively expensive for most consumers.

Collins conducts a range of globally focused commodity market, energy, water and environmental research. In addition to his research on shifts in China’s domestic oil consumption structure, he focuses on oil field water issues, evolutions in the global gasoline market, water governance and groundwater valuation in Texas and the nexus between food, water and energy.

Finally an electric vehicle in significant quantities, numbers that could move world energy markets and GCC readers have no comments???

60k bbl/day is a very small fraction of world oil consumption, which is currently running over 1000 barrels a second.  I see this as a good thing, but it doesn't seem to have anything close to the potential of e.g. PHEVs.

Contrary to USA and Canada, China has the political will and the technical and financial means to accelerate the change from current polluting ICEVs to practical smaller adapted EVs and larger e-buses, e-taxis, e-trucks and ultra high speed e-trains.

For the same price of a single $130K TESLA-S, China will build and use 43+ smaller city EVs. with a much better environmental impact.

A few large Chinese cities already have 100% e-bus fleets while we are still testing 1 to 4 e-buses. China has built 170,000+ km of very high speed electrified rails while we have zero.

We should not be surprised to see China mass produce small eh-planes for their local and export markets by 2025 or so while we will think about it for another 10+ years. .

Per vehicle consumption has declined from around 6 liters per day in 2010 to less than 2.5 lpd in 2018 (roughly based on the graph). The graph appears to show an inflection point around 2014 which is a bit odd because around that time oil prices were tanking and demand was picking up in places like the US. Its possible that China withdrew subsidies around then but it would be interesting to study what was going on.

HD:
Right you are; if our Government was worth its salt, they would be pushing clean energy for the benefit of the people and the creation of new jobs; instead they are busy depositing fossil fuel payoff money to their bank accounts.

These vehicles are rather nasty. They are very functional, but I can't see people aspiring to owning one. The basic specs are OK for urban use, but they are not safe in crashes and look pretty awful.
The challenge is to make them more marketable, while keeping the cost down.
They seem to use lead-acid batteries, so it would be good to get them up to LiIon batteries, but then the cost goes up.
From a safety perspective, I suppose you should compare them to motorbikes rather than full spec cars (and avoid crashing into trucks or Mercs).

Lead acid batteries would be a disaster. 'Bubble' cars IMO are not at all scary from the drivers seat they do tend to 'grow on owners as they are so economical and useful in urban areas esp as they are very maneuverable but the tank drivers are less convinced.
If I had to live in such poor air environs I would value the thousands an millions of road users no contributing to poor health outcomes.
Remember that many .eu cities pedal or postal options work well
that would be totally inappropriate for motor city USA style.