The US Nuclear Regulatory Commission will issue a direct final rule certifying Korea Electric Power Corporation and Korea Hydro & Nuclear Power’s Advanced Power Reactor 1400. The certification, valid for 15 years, will state that the NRC finds the design fully acceptable for US use.

The two companies submitted an application in December 2014 to certify the APR1400 pressurized water reactor (PWR) for use in the United States. The design, as approved, would produce approximately 1,400 megawatts of electricity. The APR1400 features enhanced systems to safely shut down the reactor or mitigate the effects of an accident. 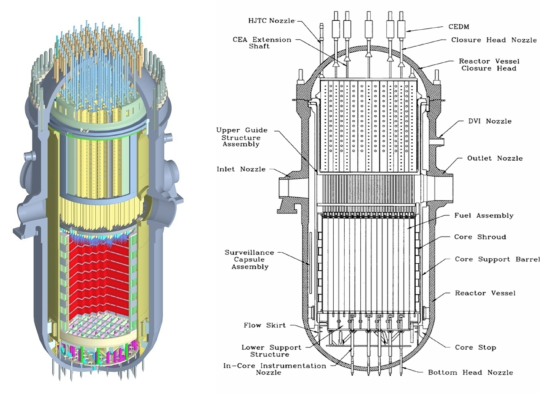 Reactor vessel of the APR1400

Full certification allows a utility to reference the design when applying for a Combined License to build and operate a nuclear power plant. Absent adverse comments, the rule will become effective 120 days following publication in the Federal Register.

The Advanced Power Reactor 1400 MWe (APR1400) is a standard evolutionary advanced light water reactor (ALWR) in the Republic of Korea developed in 2002. The design is based on the experience that has been accumulated through the development, construction, and operation of OPR1000, the Optimum Power Reactor 1000MWe—the first standard pressurized water reactor (PWR) plant in Korea.

APR1400 also utilizes state-of-the-art proven technology and incorporates a number of advanced design features to meet the utility’s needs for enhanced economic goals and to address the new licensing safety issues and requirements for an improved plant safety.

APR1400 has two primary coolant loops and each loop has one steam generator and two reactor coolant pumps in one hot leg and two cold legs arrangement. This two loop/four pump configuration of the reactor coolant system is a well proven design concept through highly reliable operation records of OPR1000 plants.

The advanced main control room, designed with the consideration of human factors engineering, with full-digital instrumentation and control (I&C) systems is another example of the design improvement. Especially, the plant general arrangement has been improved with the reflection of operation and construction experiences of OPR1000.

The reactor core of APR1400 is designed to generate 3,987 MW thermal power with an average volumetric power density of 100.9 W/cm3. The reactor core consists of 241 fuel assemblies made of fuel rods containing uranium dioxide (UO2) fuel. The number of control element assemblies (CEAs) used in the core is 93 in which 76 CEAs are full-strength reactivity control assemblies and the rest are part-strength CEAs. The absorber materials used for full-strength control rods are boron carbide (B4C) pellets, while Inconel alloy 625 is used as the absorber material for the part-strength control rods.

The core is designed for an operating cycle of above 18 months with a discharge burnup as high as approximately 60,000 MWD/MTU, and has an increased thermal margin of more than 10% to enhance safety and operational performance. A portion of the fuel rods contains uranium fuel mixed with a burnable absorber of gadolinium (Gd2O3) to suppress excess reactivity after fuelling and to help control the power distribution in the core. The neutron flux shape is monitored by means of 45 fixed in-core instrumentation (ICI) assemblies.

Four more APR1400s are under construction at Barakah in the United Arab Emirates, with first operation slated for 2020.

The staff is reviewing applications to certify two other designs: the US Advanced Pressurized Water Reactor and the NuScale small modular reactor. The staff is also reviewing an application to renew the ABWR certification.

Are those new designs enough to revive/relaunch the nuclear industry in USA-EU-China-Japan-Canada-India-So-Korea and elsewhere?