Researchers at the Karlsruhe Institute of Technology (KIT) and the University of Toronto have proposed a method enabling air conditioning and ventilation systems to produce synthetic fuels from CO2 and water from the ambient air. Compact plants are to separate CO2 from the ambient air directly in buildings and produce synthetic hydrocarbons which can then be used as renewable synthetic oil. The team presents this “crowd oil” concept in Nature Communications.

Due to the low CO2 concentration in the ambient air—today, the proportion is 0.038%—large quantities of air have to be treated in large filter systems in order to produce significant quantities of synthetic energy sources.

A research team led by Professor Roland Dittmeyer from the Institute for Micro Process Engineering (IMVT) at KIT and Professor Geoffrey Ozin from the University of Toronto (UoT) in Canada proposes to decentralize the production of synthetic energy sources in the future and to link them to existing ventilation and air conditioning systems in buildings. 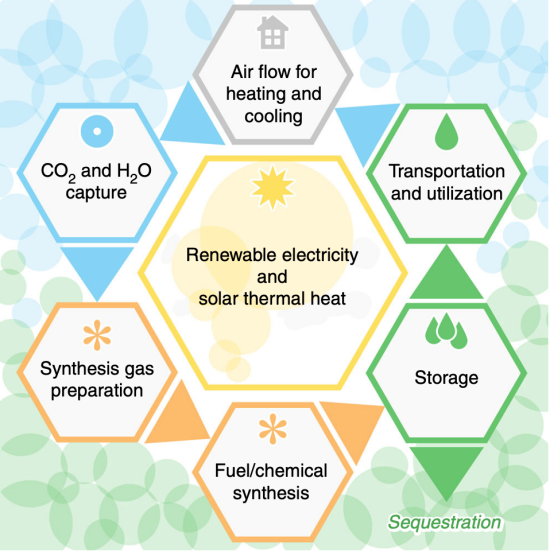 Envisioned modular, on-site renewable hydrocarbon synthesis system based on CO2 capture from thin air. Counterclockwise from top: Powered by renewable electricity, using modified A/C and ventilation systems CO2 and water can be captured from ambient air. Via electro-, photo- or thermocatalytic processes, synthesis gas is generated which is further converted to hydrocarbon fuels by miniaturized chemical processes such as the Fischer-Tropsch synthesis plus integrated upgrading processes (e.g. hydrocracking) allowing to further increase product yield and quality.
The synthesized hydrocarbon fuels can be stored and/or transported for further utilization. In case of combustion for mobility or power generation, in this scenario the CO2 emitted is again captured, finally allowing for a closed, net zero carbon cycle, thus, enabling a circular CO2 economy based on hundreds, thousands, and ultimately millions of modular plants. When stored without further utilization even negative emissions can be realized. Dittmeyer et al.

According to Professor Dittmeyer, the necessary technologies are essentially available, and the thermal and material integration of the individual process stages is expected to enable a high level of carbon utilization and a high energy efficiency.

However, the conversion of CO2 would require large amounts of electrical power to produce hydrogen or synthesis gas. This electricity must be CO2-free, i.e. it must not come from fossil sources. An accelerated expansion of renewable power generation, including through building-integrated photovoltaics, is therefore necessary, says Dittmeyer.

The researchers use quantitative analyses of office buildings, supermarkets and energy-saving houses to demonstrate the CO2 saving potential of their vision of decentralized conversion plants coupled to building infrastructure. They reckon that a significant proportion of the fossil fuels used for mobility in Germany could be replaced by “crowd oil”.

According to the team’s calculations, for example, the amount of CO2 that could potentially be captured in the ventilation systems of the approximately 25,000 supermarkets of Germany’s three largest food retailers alone would be sufficient to cover about 30% of Germany’s kerosene demand or about 8% of its diesel demand. In addition, the energy sources produced could be used in the chemical industry as universal synthesis building blocks.

The team relies on preliminary investigations of the individual process steps and process simulations from, among others, the Kopernikus project P2X of the Federal Ministry of Education and Research. On this basis, the scientists expect an energy efficiency—i.e. the proportion of electrical energy used that can be converted into chemical energy—of around 50 to 60 percent.

In addition, they expect carbon efficiency—i.e. the proportion of spent carbon atoms found in the fuel produced—to range from around 90 to almost 100 percent. In order to confirm these simulation results, IMVT researchers and project partners are currently building up the fully integrated process at KIT, with a planned CO2 turnover of 1.25 kilograms per hour.

At the same time, however, the scientists have found that the proposed concept—even if it were introduced all over Germany—would not be able to fully meet today’s demand for crude oil products. Reducing the demand for liquid fuels, for example through new mobility concepts and the expansion of local public transport, remains a necessity.

Although the components of the proposed technology, such as the plants for CO2 capture and the synthesis of energy sources, are already commercially available in some cases, the researchers believe that major research and development efforts and an adaptation of the legal and social framework conditions are still required in order to put this vision into practice.

Always these things are touted as being ways to store "renewable" energy.

Well, the CO2 capture systems require power to work.  They have to be operating when the CO2 is being generated, not just when the wind is blowing or the sun is shining.  This means they also need fossil-fuel backup.  Could the capture of 1 kg of CO2 from buildings require more than 1 kg of CO2 emitted from the backup power supplies?  No way to know without doing the numbers, but if so the scheme is not just useless; it's WORSE than useless.

Since it is extracting CO2 from ambient air, intermittency is not an issue. However efficiency is, the method is just competing with H2 generation, batteries, pumped hydro etc. Not removing any CO2 overall, since it just goes back where it came from when the hydrocarbon product is burned.

Lots of wiggle wording here. A lot of this stuff is designed to hold your attention while they continue to pollute...just another form of greenwashing.

Plenty of CO2 from processes, reuse to reduce.

Since it is extracting CO2 from ambient air, intermittency is not an issue.

Not true.  The emphasis was on removing CO2 from buildings.  You have to read between the lines to understand that such buildings are where CO2-emitting activities go on, so the concentration is higher and there's air-handling equipment running anyway.  The CO2 collection is somewhat of a "freebie" but you still have to grab it as it's being generated or it gets vented to the atmosphere where it's harder to pull out again.

Why not get CO2 from fossil fuel power plants and from sea water? Or just use the H2 directly?

If the goal is to get rid of fossil fuels, it's counterproductive to rely on them as your source of CO2.  H2 is a neat molecule but it's bulky and hard to store; tying it up with carbon lets you convert it to much more energy-dense gases and easily-stored liquids.

I think we can assume that numbers are always quoted for the process without the extra handling or in this case that required to convert the raw product to its refined product. IE assume it is a lab spec to feed stock.
I don't agree much need for such a system to run continuously. There will surely be varying concentrations of C02 as with the daily circadian or monthly and yearly flux found in nature. The concentration would simply build when not being drawn down and so be at a greater concentration when the process restarts

Biomass gasification or fermentation will be the best source of CO2.

Ethanol plants and water treatment plants produce enough CO2 to make fuels. No need to use fossil fuel CO2, even though we have millions of tons of it.

Really, SJC?  Do you have a citation or calculation for this assertion?  Because I'm working on something similar right now and you could save me a lot of work.

I am not here to save you work.
Why are you here?

So you have no basis for your assertion.  Thought so.