Anellotech’s core technology, Thermal Catalytic Biomass Conversion (Bio-TCat) was developed to produce chemicals and fuels from renewable, non-food biomass. Based on scientific research initially performed in Professor George Huber's laboratory at the University of Massachusetts-Amherst, the process has subsequently been developed by Anellotech. Bio-TCat is covered under issued patents and filed patent applications owned by Anellotech, as well as those licensed on an exclusive and global basis from the University of Massachusetts. 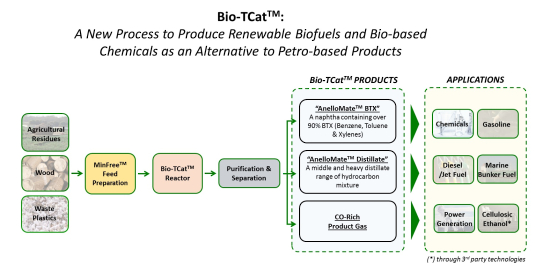 Anellotech’s patented Bio-TCat technology produces a mixture of benzene, toluene and xylene (AnelloMate BTX), which are bio-based and chemically identical to petroleum-derived counterparts.

In addition to AnelloMate BTX, Bio-TCat technology produces a heavier aromatics product, AnelloMate Distillate, which can be upgraded into a high-quality biofuels blendstock for jet or diesel transportation fuel using conventional refinery processing. Cellulosic ethanol or hydrogen can be made from Bio-TCat’s carbon monoxide co-product by using third-party technology.

Process yields of 22-24% by weight of liquid products from loblolly pine feedstock were demonstrated. Supplemental carbon monoxide (CO) output provides potential for an additional 3-5% yield by weight of cellulosic ethanol via third-party technologies or production of renewable electricity.

The Bio-TCat reactor produces a liquid product containing more than 98% C6+ aromatic chemicals directly from the MinFree-pretreated feedstock. After mild hydro-treating and purification, AnelloMate products—the family of liquid products made through Bio-TCat—meet all specifications for sale as chemicals or fuel blendstocks.

Anellotech is now planning the construction of its first commercial plant and is engaging in partnership and funding discussions with existing and new strategic partners. Engineering work is expected to begin this summer and once funding is secured, the next phase of construction will begin in the second half of 2020.

The first plant will be capable of processing 500 bone-dry tonnes/day of loblolly pine wood into 40,000 tonnes/year (860 BPSD) of products including benzene, toluene, xylenes, and C9+ aromatics to use as fuels or for making bio-based plastics for packaging and consumer products.

30,000 tonnes of carbon monoxide (CO) and other by-product gases will also be produced, for use in generating renewable electricity or used for chemical feedstock.

We are delighted with these results, as they validate the economic potential of the Bio-TCat process and give us confidence that even small, initial scales of production are viable. The goal of being cost-competitive with fossil resource technologies is a reality and we look forward to on-going process improvements.

Anellotech and its partner Axens are looking forward to licensing much larger plants following this first commercialization. These would be five-times bigger, producing 200-250,000 tonnes/year (4,000-5,000 BPSD) of aromatics and 150,000 tonnes of CO. This rapidly expands the availability of bio-aromatics for chemicals and fuels, providing cost-competitive solutions needed by refiners and brand owners looking to make a difference in their carbon footprints.

Founded in 2008, Anellotech has raised more than US$80 million in cash and in-kind contributions to date. Its patented Bio-TCat technology is an efficient thermal catalytic process for converting biomass into BTX aromatics (a mixture of benzene, toluene and xylene) which are chemically identical to petroleum-based counterparts.

High-purity BTX is used to make commodity polymers such as polyester (polyethylene terephthalate or “PET”), polystyrenes, polycarbonates, nylons and polyurethanes which are used to manufacture a variety of plastic consumer goods such as beverage bottles, food packaging, clothing, footwear, carpeting, automotive and electronic components.

Splitting the difference on those yields, it looks like this process produces 28% product by weight from a feedstock which is on the order of 45% carbon alone.  It's obvious that most of the carbon is being exhausted as part of that "CO-rich" product gas, as CO2.  While the production of benzenes and xylenes is great, much better productivity will be required to achieve freedom from petroleum.  That means processes which turn most or all of the carbon into product, not exhaust.