DOE: US plug-in vehicles consumed nearly 3 TWh of electricity in 2018 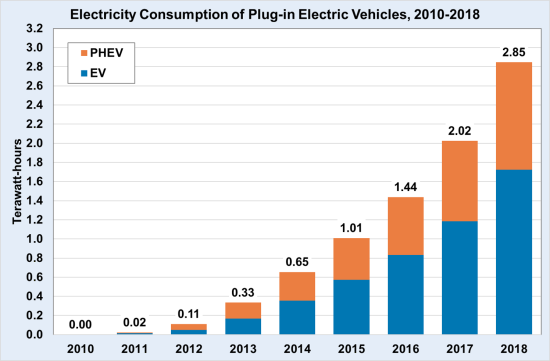 By way of comparison, the US consumes about 4200 TW-hr/yr.  We have a long way to go before our ground transport is electrified.

To put it an other way, a handy (unverified) online converter tells me this is the equivalent of 0.84 million barrels of oil. It's not nothing, but it's also not a lot. Yet.

If you convert all that 4200 TWhs/yrs to Barrels of Oil and then figure about 80% is lost in the atmosphere as heat and exhaust gas, you can see why we are changing the Earth for the worse and need to change.

Actually, the 4200 TWh/yr is what's LEFT after converting most of it from natural gas, coal and (yes) a bit of oil.

I'm working on a sketch of a scheme to put a lot of that to work.  Trying to figure out the messy details of the thermo for an example system.  To say it won't be optimised is an understatement, but I hope to get something close enough to be in the ballpark.

With a fully electrified fleet, USA's ground vehicles would consume about 240X more or about 720 TWh/year for a total of 4920 KWh/year.

Since the turn over from ICEVs to electrified vehicles (PHEVs-BEVs-FCEVs) will take another 30 to 40+ years, USA could easily install enough REs to produce an extra 720 TWh/year by 2045/2055 or so.

Of course, a few dozen new NPPs could help, if the initial and on going cost can be reduced by 50% to 66%.