Each module generates 70 kW of power; 3 modules will be installed in each truck. These modules will utilize Ballard’s liquid-cooled LCS technology, planned for commercial availability in 2019.

The AZETEC project will test hydrogen as a zero-emissions alternative fuel to diesel, along with the refueling infrastructure and other systems that would be required for Alberta to implement this new fuel solution. 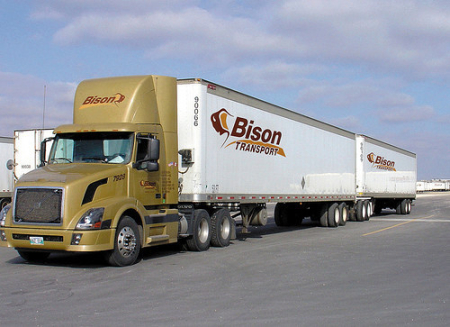 Freight transportation accounts for almost 70% of diesel fuel demand in Alberta and contributes about 12 million tonnes of greenhouse gases (GHGs) per year in the Province. The AZETEC project is scheduled to run until mid-2022 and will involve the design and manufacture of two heavy duty, extended range, hydrogen fuel cell electric hybrid trucks that will move freight year-round between the cities of Edmonton and Calgary, Alberta.

The 64 tonne (gross vehicle weight) B-train tractor-trailers, developed for Alberta’s unique operating environment, will be capable of traveling up to 430 miles (700 km) between refuelings and will be operated by Alberta trucking companies Trimac Transportation and Bison Transport.

The tractor-trailer trucks being used in the AZETEC project are the first Fuel Cell Electric Vehicles of this size and capacity to be built and tested anywhere globally. We are delighted to expand Ballard’s participation in FCEV truck trials across a growing range of sizes and classes, as we demonstrate the compelling value proposition that fuel cells offer for Heavy and Medium Duty Motive applications requiring long range, rapid refueling, heavy payloads and route flexibility.

Emissions Reduction Alberta (ERA) is contributing more than C$7.3 million (US$5.4 million) to the AZETEC project, which is led by the Alberta Motor Transportation Association. ERA is providing the funding through its competitive BEST Challenge program, which targets technologies that demonstrate the potential to reduce GHG emissions in Alberta and secure the Province's success in a lower-carbon economy.

Surprised to read that the new Alberta Conservative Government has not cancelled that project (yet).

Anyway, it will not offset more than a fraction of 0.001% of the pollution and GHG created by the local tar sand industries.

There is a rather extensive rail network across the western provinces of Canada, stretching from NW Alberta to Winnipeg.  Ironically, it only gets sparse when it hits Ontario and BC (though those provinces may be covered by other rail companies).

It would likely be better to move as much of this road freight as possible to dual-mode, rail-capable trucks, and electrify the rail system.  This would eliminate emissions without any range restrictions, and would probably allow serious down-sizing of the FC system as it would mostly be used for the "last mile" or short-haul from rail sidings to the ultimate destination.  It might even allow replacement of the FC by batteries.

@ EP. Have you ever lived in western NA? Having grown up in the mountain west, I would say rail services a smaller fraction of communities than other places. Same goes for an low density region. The only wild card comes from moving out commodities, grain, oil, coal, lumber, etc.

Anyway intermodal is great, but trucks (at all distances) will be even more dominant in the future. Driverless tractors, platooning, OP engines & aero fitments will greatly reduce costs for trucks while being green & modern enough to minimize greentard tampering. Electrifying railroads in the vast open sounds quite foolish to me. The investment would be staggering. Trains are already very efficient on a ton*miles (only surpassed by ship & barge) basis, I just don’t see it.

Have you ever lived in western NA?

No, but crossed it enough times.  Driving those wide, empty spaces induces a kind of Zen consciousness which lends itself to mental activities that are hard to do at home.


I would say rail services a smaller fraction of communities than other places.

Which wasn't the case even 75 years ago.  A lot of local lines have been pulled up, converted from "rails to trails", and the like.  But lots of the rights-of-way still exist, and new rail ROW can be made out of things like unused parts of road ROW.  Freeway medians are a big possibility.


Anyway intermodal is great, but trucks (at all distances) will be even more dominant in the future.

Except it's not "intermodal", it's a truck on a different type of road.  A road that happens to be cheaper to build and maintain than pavement, is easily electrified and handles heavy loads much better, FWIW.  The fact that certain types of trains (the extended system might not be built to full freight-system specs, due to OTR trucks being much lighter) could use it too is beside the point.

It's going to be far easier and cheaper to make a self-driving truck if it mostly doesn't have to steer and doesn't share space with passenger vehicles.  Between the advantages of electrification without batteries/FCs, easier automation and greatly improved public safety, this could easily be the future... if it was on anyone's radar.  So far, something seems to be keeping it off.  Cui bono?

It costs something between $2.31 million and $2.64 million to build a mile of new high-speed track in the USA.  This compares to $2-$3 million per mile for a 2-lane paved road, which is roughly equivalent.  But you can take some major economies with the rail.  If you downgrade the carrying capacity to 60 tons per truck (50% more than the gross weight of the typical semi) you can probably cut the cost of rail, ties and ballast considerably from the $500,000/mile cost quoted here.

Put in rail and you've got a "roadway" which takes higher gross weights, is far more durable and much cheaper to fix.  It's also dead simple to electrify, as we've been doing this since the 19th century.  It's time to recognize it as a superior way to ship significant volumes of freight even if the freight never leaves a truck.  We should have public railways just as we have public roadways.

The trend has been to more (point to point) trucking versus rails for the last 50+ years in North America. A few exception has been for Oil, liquid gas, grains and a few other bulk type cargo.

Biggy back systems have been tried and dropped by most transporters.

Except for a few passenger routes, next to no e-rails have been installed in USA/Canada. EU and recently China are leaders with over 280,000 Km of high speed e-rails. We will need many decades and a few $T to catch up.