Migration has been a driving force behind some of the biggest changes around the world—particularly over the past two decades. The shift of individuals moving from rural areas to urban areas has not only driven economic development, but also created myriad challenges for policymakers who need to understand the needs and requirements of these individuals.

An often-cited United Nations data point is that since 2009, more people are living in urban areas than rural. Despite the significance of this finding, until recently, little has been known about the distribution and degree of urbanicity of the world’s urban populations. This is a consequence of the fragmented way that countries have historically determined what classifies as urban.

In response to this lack of a common definition, a coalition of six international organizations (the EU, FAO, ILO, OECD, UN-Habitat and the World Bank) have developed a single global definition called the Degree of Urbanization.

They have applied this definition to an estimated global population grid, thereby creating a single, consistent definition of urbanization that could be applied uniformly to any specific geographic area.

Available for free download, the geospatial layer can also be used retroactively to allow anyone to apply the Degree of Urbanization to their own data.

Gallup partnered with the European Commission in 2018 to review more than 170,000 face-to-face geotagged interviews collected through the Gallup World Poll in more than 109 countries in 2017 and 65 countries in 2016. By overlaying the interview geotags against this geospatial layer, Gallup was able to obtain a new globally consistent, harmonized Degree of Urbanization variable for every interview. 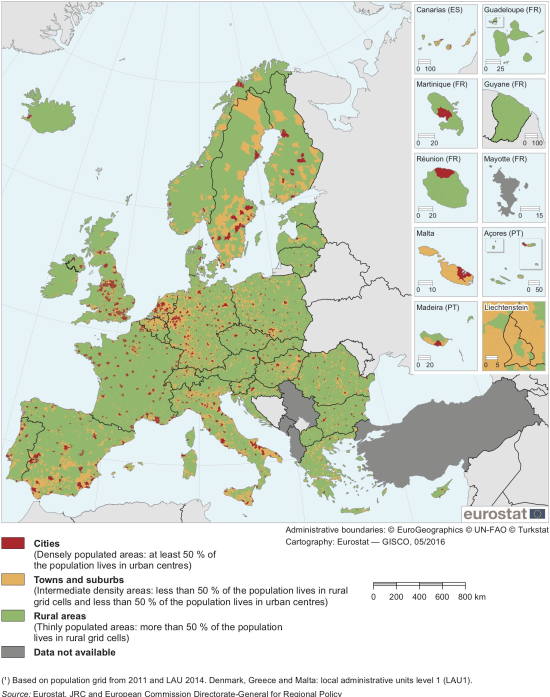 This new standardized variable has widescale ramifications for policymaking. It can facilitate the sharing of best practices across communities with similar characteristics and improve policies responsible for resource allocation or aid distribution.

The newly developed Degree of Urbanisation variable is available through a free download (as a .csv file) that Gallup data subscribers can integrate back into the 2016 and 2017 World Poll data sets.

This variable provides subscribers with an opportunity to explore the impact of the Degree of Urbanization against the battery of Gallup’s core World Poll variables, including: happiness, access to good jobs and desire to migrate. It also creates an opportunity for Gallup’s clients to explore the impact of urbanicity on SDG indicators such as food security and financial inclusion.