Researchers from the University of Kentucky and the San Francisco County Transportation Authority have determined that, contrary to the concept and vision, transportation network companies such as Uber and Lyft are the biggest contributor to growing traffic congestion in San Francisco.

Using data scraped from the application programming interfaces of Uber and Lyft, combined with observed travel time data, the researchers found that between 2010 and 2016, weekday vehicle hours of delay increased by 62% compared to 22% in a counterfactual 2016 scenario without TNCs.

The findings, which contradict claims that these services alleviate road congestion, should be of interest to transportation planners and policy makers grappling with how to regulate ride-sharing services. Their open-access study is published in the journal Science Advances.

Transportation network companies (TNCs) have grown rapidly in recent years. In 2016, TNCs were 15% of all intra-San Francisco vehicle trips, which is 12 times the number of taxi trips, while in New York in 2016, TNC ridership equaled that of yellow cab and doubled annually between 2014 and 2016. TNCs are on-demand ride services where rides are arranged through a mobile app to connect the passenger with a driver, often a private individual driving their personal vehicle. The current system is commonly viewed as a bridge technology that may be replaced by fleets of self-driving cars if and when that technology is ready. TNCs are one form of shared mobility and one form of Mobility-as-a-Service (MaaS). They have been referred to by several names, including ridesourcing, ride-hailing, and e-hail. Ridesourcing is the preferred international standard, but we refer to TNC throughout this text because it is the legal term used in California, where this study was conducted.

Because they have the potential to reduce the reliance on private cars, the TNCs themselves present a vision of the future in which they reduce traffic congestion and allow roads to be repurposed to other uses. There are several mechanisms by which TNCs could reduce congestion. If TNCs are shared concurrently, a service known as ridesplitting, they could reduce traffic if they replace a trip that would otherwise be in a vehicle with fewer occupants. Simulations show that ridesplitting has substantial potential to reduce congestion. TNCs could induce travelers to shift trips from auto to transit by providing better first- and last-mile connections to regional transit, and there is some evidence to suggest that a small portion of travelers may use TNCs in this way. Some have speculated that by providing a convenient alternative to owning a car, TNCs could incentivize people to own fewer cars and, by extension, induce them to shift other trips to transit or non-motorized modes, potentially reducing their total vehicle travel.

Competing with these factors are several mechanisms by which TNCs may increase traffic congestion. Deadheading, or out-of-service movement, is the movement of a vehicle with no passenger. TNCs and taxis deadhead to look for fares or reposition before or after a paid trip. Out-of-service travel is estimated at about 50% of TNC vehicle miles traveled (VMT) in New York and 20% in San Francisco. Whether a trip made by TNC adds traffic to the road also depends on which mode would have been used for the trip if TNC was not available. Between 43 and 61% of TNC trips substitute for transit, walk, or bike travel or would not have been made at all, adding traffic to the road that otherwise would not have been there. TNC pickups and drop-offs (PUDO) contribute to congestion on urban streets by disrupting traffic flow in the curb lane, similar to the congestion effects found in areas that rely heavily on taxis. 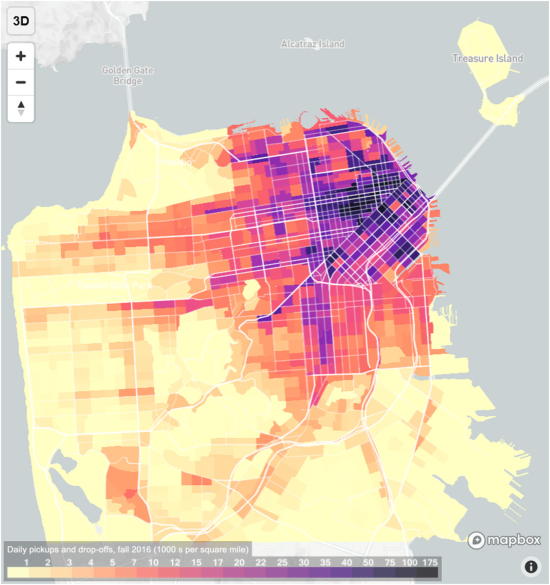 Daily TNC pickups and drop-offs for an average Wednesday in fall 2016. Darker colors represent a higher density of TNC activity. Data and an interactive mapping tool are available at tncstoday.sfcta.org. Erhardt et al.

To control for other factors that may also affect congestion, they used San Francisco’s travel demand model, SF-CHAMP, which produces estimates of traffic volumes on all roads in San Francisco and is sensitive to changes in population and demographics, employment, transportation networks, and congestion.

Autonomous cars will increase congestion even more, of course.

The conclusion of this study does not make sense.

Ride sharing, with or without a driver, will certainly reduce traffic load. Three to six passengers per vehicle will increase traffic density a lot less than the current 1.3 people/car.

On a related topic, there was an article here last year explaining that autonomous cars will find it cheaper to continuously drive around if parking is expensive. That will certainly add to congestion: imagine hundreds or thousands of empty cars, driving slowly in circles all day. Sure, some of them will occasionally leave the city core, but the net number should be stable. At the end of the day they will ferry you home and drive around your residential neighbourhoods all night. The fact is, these cars have to be somewhere. They don't disappear when we don't need them, and transportation requirements are not random: most people need to get to work or school in the morning, and back home at night. Not much for autonomous cars to do in between these two peaks.