A team of researchers led by a group from the University of Maryland has developed a halogen conversion–intercalation chemistry in graphite that produces composite electrodes with a capacity of 243 mAh g-1 (for the total weight of the electrode) at an average potential of 4.2 volts versus Li/Li+. Combining this cathode with a passivated graphite anode, the team created a 4V-class aqueous Li-ion full cell with an energy density of 460 Wh kg-1 of total composite electrode and about 100% Coulombic efficiency.

The cell is based on an anion conversion–intercalation mechanism that combines the high energy densities of conversion reactions, the excellent reversibility of intercalation and the improved safety of aqueous batteries. A paper on their work appears in the journal Nature. 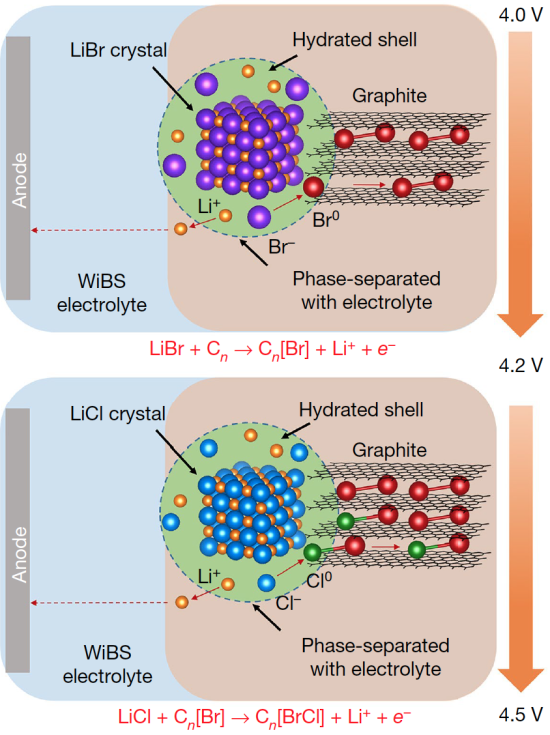 The use of ‘water-in-salt’ electrolytes has considerably expanded the electrochemical window of aqueous lithium-ion batteries to 3 to 4 volts, making it possible to couple high-voltage cathodes with low-potential graphite anodes. However, the limited lithium intercalation capacities (less than 200 milliampere-hours per gram) of typical transition-metal-oxide cathodes preclude higher energy densities. Partial or exclusive anionic redox reactions may achieve higher capacity, but at the expense of reversibility.

… Using the anionic-redox reaction of halide anions (Br− and Cl−) in graphite, a composite electrode containing equimolar lithium halide salts (LiBr)0.5(LiCl)0.5–graphite (hereafter denoted as LBC-G) was synthesized by mixing anhydrous LiBr and LiCl with graphite at an optimal mass ratio of 2:1:2 (corresponding to a molar ratio of (LiBr)0.5(LiCl)0.5C~3.7). Herein, the highly concentrated water-in-bisalt (WIBS) electrolyte confined partially hydrated LiBr/LiCl within the solid cathode matrix, and upon oxidation, Br0 and Cl0 are stabilized by sequential intercalation into the graphite host as solid graphite intercalation compounds (GICs).

This new cathode chemistry inherits the high energy of the conversion reaction and the excellent reversibility of topotactic intercalation, and provides batteries that differ fundamentally from the ‘dual-ion’ batteries that reversibly intercalate complex anions (PF6−, BF4−, TFSI−; TFSI, bis(trifluoromethanesulfonyl)imide) into graphite at low packing density, where these stable anions experience no redox reactions, resulting in low capacities below 120 mAh g−1. 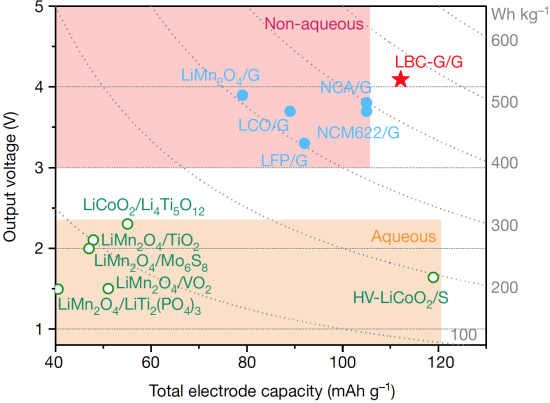 At 460 Wh kg-1, the energy density of the full cell is greater than that of state-of-the-art non-aqueous LIBs. After considering the electrolyte mass, the full-cell energy density still reaches 304 Wh kg−1.

This could be a significant discovery for two reasons: using a reaction conversion cathode and a safe high voltage aqueous electrolyte. The Conversion cathode yields "an unprecedented energy density of 970 Wh kg−1, almost twice as high as that of transition-metal intercalation cathodes." as noted in the Nature article.
From another article, this quote:"The paper by the University of Maryland and the Army team is the most creative new battery chemistry I have seen in at least 10 years," said Professor Jeff Dahn, of Dalhousie University in Canada. Dahn is a leader in battery technology and one of the inventors of the lithium ion battery. "The fact that the LiCl and LiBr reversibly convert and form halogen intercalated graphite is truly incredible. The team has demonstrated encouraging reversibility for 150 cycles and have shown that high energy densities should be attainable in 4-volt cells that contain no transition metals and no non-aqueous solvents. It remains to be seen if a practical long-lived commercial cell can be developed, but I am very excited by this research."
It should also be noted that this was done with a Graphite anode. Higher energy density anodes like Silicon or Lithium metal should improve the overall cell energy density.

Lithium metal would react with H2O to make LiOH + H2, no?

If this could be done with sodium, it would be earth-shaking.

Chunsheng Wang has researched the “Water-in-Salt” Electrolyte in both
Sodium Ion and in Lithium Metal anodes .
In the last article, he states on page 125 "Pre-coating a graphite electrode or a Li-metal foil with a thin layer of LiTFSI-HFE gel enables the stable cycling of these anode materials in gel-WiSE without apparent hydrogen evolution. "

New to me but 'Utility' seems progressive and informative like it would appeal to the readers here.
There is some on sodium ion. About:

"Utility is the title of choice for decision makers at all levels of water and energy utilities, as well as other major players like consulting engineers and first-tier contractors.

Utility is integrated across print and online, and explores the biggest news and issues across the utility industry. It is Australia’s only dedicated utility magazine, and covers all areas of the utility sector, including water and sewer, gas, electricity, communications and the NBN. (that's National Broadband Network)

Every issue of Utility features thought-leading content from senior figures and independent experts in the utility space. These industry leaders look at major projects, policy, technologies, equipment, processes and the significant factors impacting Australia’s utilities now and in the future.

Utility is Australia’s most powerful and widely-read communication tool for the utility industry."

The a.u. federal elections are due in a week with climate change top on the concerns.
Federal Labor is the major party currently in opposition.
The Science party is the geek end of possible.