Home About Contact RSS GCC Twitter Newsletter
Northwestern team identifies site in enzyme responsible for methane-methanol conversion
CapGemini: 1 out of 2 consumers want to get into a self-driving experience within the next 5 years

The new safety car for the ABB FIA Formula E Championship is a modified BMW i8 Roadster Safety Car. The design is based on its sister model, the BMW i8 Coupé Safety Car. 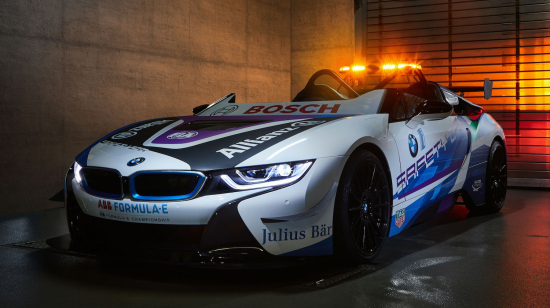 The new BMW i8 Roadster Safety Car is the latest addition to the fleet of BMW i Safety Cars. It is the first Safety Car in the world that can be used with an open cockpit. The most striking characteristics of the design are the rear wing and shortened front windscreen.

The Safety Car’s center of gravity is also 15 millimeters lower than the production car. The car has M Carbon Ceramic Brakes, an FIA-approved roll bar, a front splitter and a rear wing for additional downforce.

Modifications necessary for its role of Safety Car have also been made. The light bar is mounted above the rear wing, making it easily visible from all angles in any race situation. The BMW i8 Roadster Safety Car also has a communication antenna and a GPS antenna, an extensive communication system in the cockpit, and a rear-view camera.