Methanotrophic bacteria remove methane from the environment and convert it into methanol. An interdisciplinary team at Northwestern University has found that the enzyme responsible for the methane-methanol conversion catalyzes this reaction at a site that contains just one copper ion. The study is published in the journal Science.

Bacteria that oxidize methane to methanol are central to mitigating emissions of methane, a potent greenhouse gas. The nature of the copper active site in the primary metabolic enzyme of these bacteria, particulate methane monooxygenase (pMMO), has been controversial owing to seemingly contradictory biochemical, spectroscopic, and crystallographic results. We present biochemical and electron paramagnetic resonance spectroscopic characterization most consistent with two monocopper sites within pMMO: one in the soluble PmoB subunit at the previously assigned active site (CuB) and one ~2 nanometers away in the membrane-bound PmoC subunit (CuC). On the basis of these results, we propose that a monocopper site is able to catalyze methane oxidation in pMMO. 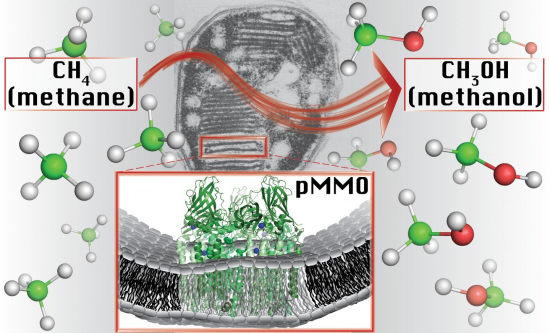 The identity and structure of the metal ions responsible for catalysis have remained elusive for decades. Our study provides a major leap forward in understanding how bacteria methane-to-methanol conversion.

By identifying the type of copper center involved, we have laid the foundation for determining how nature carries out one of its most challenging reactions.

Current industrial processes to catalyze a methane-to-methanol reaction require tremendous pressure and extreme temperatures, reaching higher than 1,300 degrees Celsius. Methanotrophs, however, perform the reaction at room temperature and “for free.”