In 2018, plug-in light-duty vehicles on the road displaced 323 million gallons of gasoline—about one quarter of a percent of all gasoline used in the United States, according to the US Department of Energy (DOE). 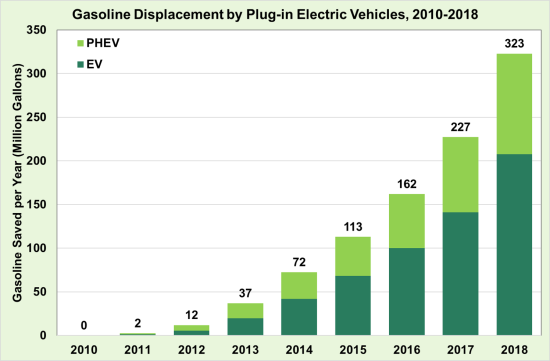 From the abstract of the report:

In 2018, PEVs used 2.8 terawatt-hours of electricity to drive 8.6 billion miles, offsetting 320 million gallons of gasoline. The majority of these vehicles were assembled in the United States, and over 42 gigawatt-hours of lithium-ion batteries have been installed in vehicles.

Dividing 2800 GWh of electricity by 42 GWh of battery capacity, this yields an average utilization of 66.7 full-capacity charges per battery per year.  This is a disappointingly low figure, and shows that the allocation of batteries between vehicle types is very inefficient for the fuel savings created.

Had all the batteries been allocated to PHEVs and used at 1.5 full charges per day on weekdays (390 full charges/year) and 0.75 charges/day on weekends (78 full charges/year), this would increase to 468 full charges/battery/year.  42 GWh of batteries would have accounted for 19.66 TWh of electric consumption and, pari passu, displaced 2.25 billion gallons of gasoline (about 1.5%).  The savings in practice would be greater, because hybridizing the vehicle reduces fuel consumption by about 1/3 off the top.