In a study on the effect of exhaust particles from aircraft turbine engines on human lung cells, Swiss researchers have found that cells reacted most strongly to particles emitted during ground idling. The study also showed that the cytotoxic effect is only to some extent comparable to that of particles from gasoline and diesel engines.

For around 20 years, studies have shown that airborne particulate matter negatively affects human health. Now, in addition to already investigated particle sources such as emissions from heating systems, industry and road traffic, aircraft turbine engine particle emissions have, in the wake of increasing air traffic, also become more important. As a result, scientific research of the particulate matter from air traffic is important for the development of environmental standards in the aviation sector. 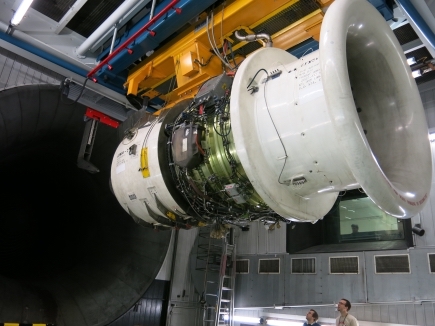 The primary solid particles, i.e. those emitted directly from the source, have the strongest effect on people in its immediate vicinity. However, the toxicity of solid particles from aircraft turbine engines is still widely unknown.

Now a multidisciplinary team, led by lung researcher Marianne Geiser of the Institute of Anatomy at the University of Bern, together with colleagues from Empa and the University of Applied Sciences and Arts Northwestern Switzerland (FHNW), has shown that primary soot particles from kerosene combustion in aircraft turbine engines also cause direct damage to lung cells and can trigger an inflammatory reaction if the solid particles—as simulated in the experiment—are inhaled in the direct vicinity of the engine.

The researchers demonstrated for the first time that the damaging effects also depend on the operating conditions of the turbine engine, the composition of the fuel, and the structure of the generated particles. The open-access study was published in the journal Nature Communications Biology.

Particles emitted from aircraft turbine engines are generally ultrafine, i.e. smaller than 100 nm. When inhaled, these nanoparticles—like those from other combustion sources—efficiently deposit in the airways.

In healthy people, the well-developed defense mechanisms in the lungs normally take care of rendering the deposited particles ineffective and removing them from the lungs as quickly as possible. However, if the inhaled particles manage to overcome these defense mechanisms, due to their structure or physico-chemical properties, there is a danger for irreparable damage to the lung tissue.

In innovative, combined experiments, the researchers investigated the toxicity of particles from the exhaust of a CFM56-7B turbofan—the most commonly used aircraft turbine engine globally.

The turbine was run in climb mode (simulating aircraft take-off and climb) and at ground idling speed at the SR Technics testing facility at Zürich Airport. Within this framework, the researchers were able to use a globally standardized measurement method, applied for the environmental certification of aircraft engines.

An aerosol deposition chamber developed specifically for investigating the toxicity of inhaled nanoparticles in vitro and built at FHNW, made it possible to deposit the generated particulate matter in a realistic way on cultures of bronchial epithelial cells, which line the inner surface of bronchi. Thus, the researchers were able to deposit an aerosol directly on human lung cells, which would not have been possible in an experiment with human test persons for ethical reasons.

Moreover, the particles were analyzed for their physico-chemical and structural properties to examine possible links with the effects of the particles.

The cells were exposed to the aerosol for 60 minutes. During this time, a particulate mass of 1.6 to 6.7 ng (billionths of a gram) per square centimeter of cell surface area was deposited while the turbine was running at ground idling, and 310 to 430 ng while it was in climb mode. This is equivalent to the daily airway intake of mildly polluted rural air with 20 µg (millionths of a gram) of particles per cubic meter of air up to heavily polluted air in a large city (100-500 µg of particles per cubic meter of air).

Evidence of increased cell membrane damage and oxidative stress in the cell cultures was identified. Oxidative stress accelerates ageing of cells and can be a trigger for cancer or immune system diseases.

The particles turned out to cause different degrees of damage depending on the turbine thrust level and type of fuel: the highest values were recorded for conventional fuel at ground idling, and for biofuel in climb mode. These results were surprising to the team.

The cell reactions in the tests with conventional kerosene fuel at full engine thrust—comparable with takeoff and climb—in particular, were weaker than expected.

These results can be partly explained by the very small dimensions and the structure of these particles.

—Anthi Liati, specialized in the nanostructure of combustion aerosols at Empa

Moreover, the cells responded to biofuel exposure by increasing the secretion of inflammatory cytokines, which play a central role in our immune system.

This reaction reduces the ability of airway epithelial cells to react appropriately to any subsequent viral or bacterial infections.

Overall, according to the researchers, it has been demonstrated that the cell-damaging effect caused by exposure to particles generated by the combustion of gasoline, diesel and kerosene fuel are comparable for similar doses and exposure times. Additionally, a similar pattern was found in the secretion of inflammatory cytokines after exposure to gasoline and kerosene fuel particles.

Aerosols are the finest solid or fluid substance suspended in the air. In combustion processes, the composition of ultrafine particles is highly variable. In addition, aerosols are unstable, and they are modified after their formation. Primary ultrafine solid particles have a high diffusion velocity. As a result, at high concentrations such particles either stick together or attach to other particles. Therefore, the effect of primary ultrafine particles depends on the distance from the source, implying that there is a difference depending on whether a person is close to the source (such as people at the roadside ) or at a greater distance (aircraft taxiing or taking off). Further research is needed to clarify how strong the impact would be at a greater distance from an aircraft engine.

This looks like it might lead to something like a switch from taxiing under main engine power to APU-powered electric nosewheel taxiing, or even transport from gate to the engine runup area by electric tugs.  The less time the main engines are running on or near the ground, the lower the particle emissions where they are most likely to be inhaled.

The obvious took many years to come out. Electric tugs could certainly lower the harmful emissions?

Ideally, aircraft would be powered by electric ducted fans or some other clean energy devices, i.e., hydrogen fuel, etc. Or, short and medium distance mass transit might be accomplished using HyperLoop or fast electric rail. None of this is possible as yet...so, minimizing ground run up and cutting back power is about all we have presently.

Scientist have known for years that jet engines are pollution machines; but, the jet engine interests have been successful in kept that quiet.