Researchers from the University of Wisconsin Madison and ExxonMobil Research and Engineering have devised a two-stage process by which an alcohol such as ethanol or 1-butanol can be converted with high yields into distillate-range ethers and olefins by combining Guerbet coupling (the coupling of two alcohol molecules) and intermolecular dehydration.

The ethers can be used as cetane-improvers in diesel fuel, while the olefins can be hydrogenated and blended with gasoline or oligomerized and hydrogenated to jet-range paraffins. A paper on their work appears in the RSC journal Green Chemistry.

The synthesis of liquid transportation fuels from abundant, bio-derived feedstocks is motivated by the drive toward lower GHG fuels. Today the most widely-used biofuel is ethanol produced from starch fermentation, though fermentation of lignocellulosic biomass and waste COx streams has recently received considerable attention. While ethanol production is well- established commercially with over 25 billion barrels produced per year, its fuel applications are currently confined to gasoline with blending levels that have been historically limited to around 10 vol% in the United States. Several companies are working to commercialize second generation ethanol from cellulosic biomass which would result in significantly lower GHG emissions and additional volumes of alcohol fuel production.

The demand for gasoline is also projected to decrease over the next few decades, while the demand for heavier C8-C22 distillate fuels such as jet fuel and diesel is projected to increase. Technologies for the conversion of ethanol into diesel and jet fuel blendstocks which can take advantage of the existing ethanol infrastructure are therefore desirable.

… An alternative oligomerization chemistry which can be performed in a single step, is hydrogen neutral, and introduces branching in a more predictable manner is Guerbet coupling, a chemistry which has recently received considerable attention mainly for 1-butanol synthesis. The potential for using this chemistry to oligomerize ethanol to distillate-range alcohols is uncertain, however. … In this study, we aim to first clarify the general challenges with using Guerbet coupling to oligomerize ethanol to the distillate range and to then provide a novel method for combining selective Guerbet coupling with etherification to produce high-cetane distillate-range fuels from ethanol. 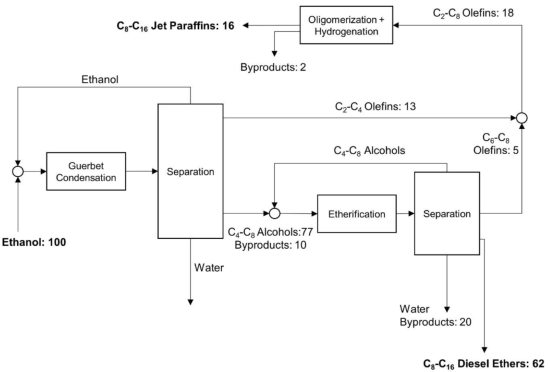 Block diagram for the conversion of ethanol to distillate-range ethers and paraffins through a combination of Guerbet condensation, etherification, olefin oligomerization, and hydrogenation. The numbers depicted are carbon flows based on a process in which Guerbet coupling is performed at 50% conversion and etherification is performed at 65% conversion. Olefin oligomerization is assumed to be 80% selective to jet-range olefins, which can be fully hydrogenated to paraffins. The byproducts are comprised of aldehydes and unidentified species. Eagan et al.

The first stage of the new process uses calcium hydroxyapatite to produce higher linear and branched alcohols at above 80% selectivity at up to 40% conversion with high stability for over 400h time-on-stream operation.

The team observed cross-etherification was observed between linear and branched alcohols, improving the selectivity to ethers in conversion of the latter.

In a process involving ethanol coupling at 50% conversion, etherification at ~65% conversion, and recycle loops with separations, C8-C16 ethers can be theoretically produced at a 62% yield. The olefins produced in the two stages can also be theoretically oligomerized and hydrogenated with proven technologies to jet-range paraffins with an overall estimated yield of 14%. Using this approach we show that distillate yields above 80% may be produced from ethanol.

Thanks, I'll use it in my dissertation https://phdify.com/