NASA will provide $6 million over the course of three years to support a University Leadership Initiative (ULI) project focused on the development of a fully electric aircraft platform that uses cryogenic liquid hydrogen as an energy storage method.

The hydrogen chemical energy is converted to electrical energy through a series of fuel cells, which drive the ultra-efficient electric propulsion system. The low temperature requirements of the hydrogen system also provide opportunities to use superconducting, or lossless, energy transmission and high-power motor systems.

It’s similar to how MRIs work, magnetic resonance imaging. However, these necessary electrical drivetrain systems do not yet exist, and the methods for integrating electrically driven propulsion technologies into an aircraft platform have not yet been effectively established. This program seeks to address this gap and make foundational contributions in technologies that will enable fully electric aircraft of the future.

—Phillip Ansell, assistant professor in the Department of Aerospace Engineering at Urbana-Champaign and principal investigator

The co-principal investigator on the project is Associate Professor Kiruba Haran in U of I’s Department of Electrical and Computer Engineering. 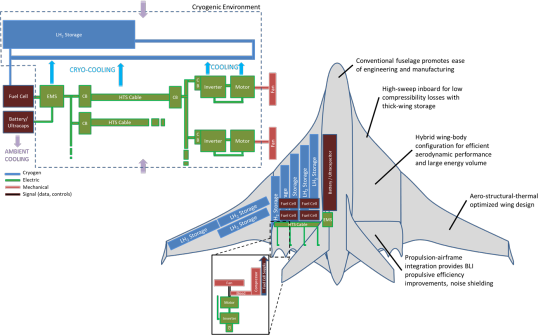 NASA ULI. NASA created ULI to initiate a new type of interaction between NASA’s Aeronautics Research Mission Directorate (ARMD) and the university community, in which US universities take the lead, build their own teams, and set their own research path.

The award to the University of Illinois was one of three in the second round of ULI funding, which will provide a total of about $15 million over three years. The two other awards are:

I imagine it might be a few years before we are crossing the Atlantic in these, but great stuff!

IMO, you'd be better putting the effort into land or sea transport. Both of these can handle heavy vehicles better, and land transport can use rails and wires to supply electricity.
Also, H2 is usually made by reforming methane, which is not so green to start off with.
OK, some short range planes are being built, for for anything over, say 400 miles, you are in trouble.

The use of a Blended Wing Body is an interesting approach to solve the poor volumetric energy density of liquid hydrogen. However, the need for fuel cells is probably unnecessary. The new GE9X proposed for the Boeing 777X has efficiency that equals fuel cell efficiency and would provide an existing solution (fuel cells would be OK for the APU however).
Of course as pointed out the H2 would most likely come from reforming methane, which would be acceptable if the CO2 was sequestered.

Plenty of hydrogen is already produced renewably, and by the time this reaches the skies if we have not cracked it big time we are in trouble.

And current PEM fuel cells are up to 70% efficient, and we are looking at potentially 80% from SOFC.

A jet engine is a wide open 'dirty' polluting device with no emission controls other than filtered fuel; presently jet engines can't burn H2 directly; so, this is the best place to start; develop a H2 jet engine and run it on any hydrogen that's available, even if it's from the reforming process while hydrogen from electrolysis, electric hybrids and perhaps all electric aircraft are under development...recent studies conclude jet engines are highly dangerous to the health of passenger at the airports and we know they produce smog and GHG a bunch at the upper regions of the atmosphere...cleaning up jet engines is a project long overdue.

Liquid hydrogen has a density of only 0.07.  At a LHV of 120 MJ/kg, LH2 has an energy density of just 8.4 MJ/liter.  Jet-A has an energy density of about 33.2 MJ/liter, almost 4 times as great.  Given the irreducible minimum of energy required to loft the airframe alone, plus the weight burden of large insulated tanks, there are not going to be any major savings from reduced weight of fuel.  This doesn't work very well in practice.

Hypedrogen has always been a solution in search of a problem.  It would solve the problem of dirigibles with the simple use of a blanket of oxygen-free buffer gas (e.g. nitrogen) between the gas cells and the skin.  But the PTB are controlled by the oil companies, so they push hypedrogen into applications where it is badly suited and guaranteed to fail.  This achieves the goal of appearing to "DO SOMETHING!" while protecting their markets.

By constantly refuting the recent major progress made with 24/7 REs, FCs and clean H2 production and distribution, SAEP has become one of the oil compagnies best supporter.

By constantly touting unreliable "REs" which require fast-reacting backup energy which can only be supplied by OCGTs burning natural gas, AlzHarvey has always been one of the oil majors' (which own NG as well) best supporters.

They can, but there isn't nearly enough of it to decarbonize the backup system.

Hydrogen in the 4th state of matter can produce 140Mj per liter if you could convert the hydrogen directly to electricity. Using a Helmholtz coil you can reach nearly 99% efficiency in doing just that.

A Helmholtz coil is just a means of producing a particularly even magnetic field over a given volume.  You have obviously been hoodwinked by scammers.

To maximize the use of a mix of many distributed REs, it is essential to match energy consumption with energy availability. It is not an easy task but it is possible to do.

In areas with major Hydro potential, specially hydro plants with very large water reservoirs, existing and new hydro plants capacity can be increased with added turbines and varied as required to supply extra energy during the peak demand periods, to ensure 24/7 REs for all connected customers.

Where no or not enough natural hydro plants exist, local mountains/hills could be used to installed pumped hydro systems to store and use e-energy to the level required to ensure 24/7 REs for all connected customers.

‘...an experimental reactor that could demonstrate the potential of methane cracking and overcome previous obstacles. The starting point is a novel reactor design, as proposed by Carlo Rubbia and based on liquid metal technology. Fine methane bubbles are injected at the bottom of a column filled with molten tin. The cracking reaction happens when these bubbles rise to the surface of the liquid metal. Carbon separates on the surface of the bubbles and is deposited as a powder at the top end of the reactor when they disintegrate.’

‘...cost estimates are uncertain, since methane cracking is not yet a fully mature technology. However, preliminary calculations show that it could achieve costs of 1.9 to 3.3 euro per kilogram of hydrogen at German natural gas prices, and without taking the market value of carbon into consideration.’

To maximize the use of a mix of many distributed REs, it is essential to match energy consumption with energy availability.

AlzHarvey wants everyone to forget that this impossible matching task is why "REs" were abandoned in favor of coal, oil and gas in the first place.  If you need to work to make a living, and the unreliability of "renewable energy" means work must be put off, people suffer.  Further, trying to use those unreliable "renewables" requires non-renewable investment in capture and transmission systems.  These investments have large externalities.  Wind, for example, requires several times the steel and concrete needed for the same amount of nuclear energy.

This begs the question, WHY should this use be maximized, rather than non-renewable investments and external effects minimized?  This serves two groups:

It benefits exactly NO ONE ELSE.


It is not an easy task

It's a pointless, useless and destructive task.  Why advocate for it?  To advance the agenda of the rent-seekers.  If AlzHarvey was a paid propagandist for those rent-seekers, what would he be doing differently?  Nothing that I can see.