The model, called Water Analysis Tool for Energy Resources or WATER, has users from more than 35 US states. 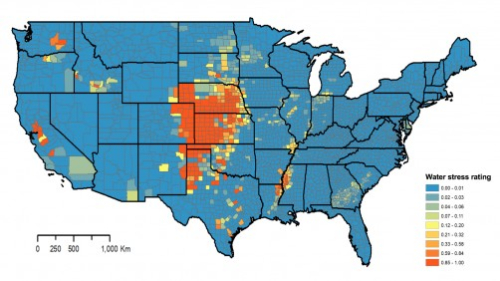 This map depicts water availability by county; areas shown in orange are under higher levels of water stress.

It provides an in-depth analysis of water consumption used in the development of bioenergy, allowing industry leaders to make better informed decisions about what types of feedstock are most appropriate for use in water-limited areas.

Water sustainability is becoming increasingly important when considering our energy future. When evaluating the effects of bioenergy on water, it’s critical that we understand how much water might be consumed, as well as the potential impacts of that water consumption at a regional level. Tools like these keep us working toward meeting the national and global need for secure, affordable water.

—Daniel Simmons, Assistant Secretary of the Office of Energy Efficiency and Renewable Energy, US Department of Energy

Argonne’s May Wu, principal environmental systems analyst, built the software with the help of three other researchers. The project was funded by the US Department of Energy’s Bioenergy Technologies Office within the Office of Energy Efficiency and Renewable Energy.

This latest version of the software, WATER 4.0, is different from its predecessors in two critical ways. First, the new model indicates the amount of water available in different regions of the United States at the county level.

In an effort to add this important feature, Wu and her team calculated the annual freshwater available from rainfall, stream flow, and renewable groundwater and then compared this with irrigation water demand under future projected bioenergy production scenarios.

Second, the new model estimates the freshwater available for non-bioenergy sectors such as agriculture, power, municipal and other industries in addition to ecosystem services after bioenergy feedstock water demand is met.

WATER 4.0 also allows users to focus more acutely on different regions of the continental US as each has a different availability of water.

The software was first launched in 2012 with a pathway-based platform that calculated the water footprint of a biofuel from the feedstock growing stage to the fuel production stage at the county, state, and regional level. It focused on several basic US feedstock types, including conventional corn grain, soybean, corn stover and wheat straw.

A second version was released in 2014 that included new pathways of bioenergy production from perennial grasses, including switchgrass and miscanthus.