Researchers at Beihang University in Beijing have developed a linear molecule sulfur-rich organic material as sulfur cathode for a lithium-sulfur battery. The tetramethylthiuram disulfide-sulfur (TMTD-S) cathode material delivers an initial capacity of 685 mAh g−1 at 0.2C (1 C = 1061 mAh g−1) and maintains the capacity at 540 mAh g−1 after 200 cycles.

Furthermore, when the conductivity of the TMTD-S cathode material is enhanced with Ketjen Black agent and a carbon cloth current collector, the material delivers initial capacity as high as 1054 mAh g−1 and retains 930 mAh g−1 after 100 cycles even at a high current density of 0.5 C and high mass loading of 1.8 mg cm−2. A paper on their work is published in the Journal of Power Sources. 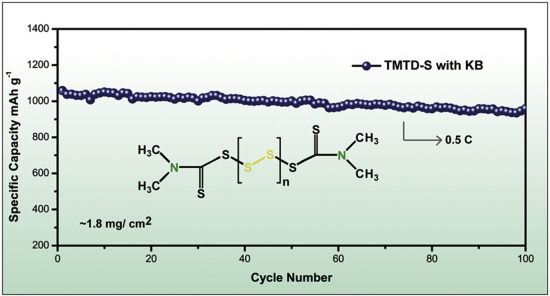 In the past decade, lithium-sulfur batteries have been intensively researched worldwide due to their high theoretical energy density (2600 Wh kg􏰀-1) and been considered as the next generation energy storage system. However, obvious shortcomings such as low reversible capacity, low coulombic efficiency, and short cycling lifespan limited the realistic application of sulfur cathode. As is known to all, these shortcomings are inherited from intrinsic properties of sulfur cathode, usually referred to as polysulfide shuttle effect. Therefore, extensive efforts have be devoted to prevent polysulfide shuttle, such as adding an interlayer in the separator to hold the polysulfide in the cathode side, introducing highly polarity materials in cathode to absorb the nearby polysulfide, designing nanostructure composites cathode to physically restrict polysulfide, adding multifunctional electrolyte, using electrocatalyst in cathode to accelerate polysulfide deposited.

When we retrospect the energy storage mechanism of sulfur cathode, the essence of the lithiated and de-lithiated process lies in the dissociation and formation of S–S bonds, which is not only existed in elemental sulfur but also in other sulfur-containing compounds. From this point, S–S bonds contained compounds might become the potential candidates for cathode materials, such as metal multisulfide (TiS4, MoS3, etc), organosulfur composite and organic multisulfide (disulfide/trisulfide/tetrasulfide) compounds.