Business Korea reports that sales of Hyundai Motor’s Nexo hydrogen fuel cell vehicle this year reached 1,075 units on May 17, exceeding the 949 units sold for the whole of last year. This marks the first time Hyundai has sold more than 1,000 hydrogen cars annually since 2013. 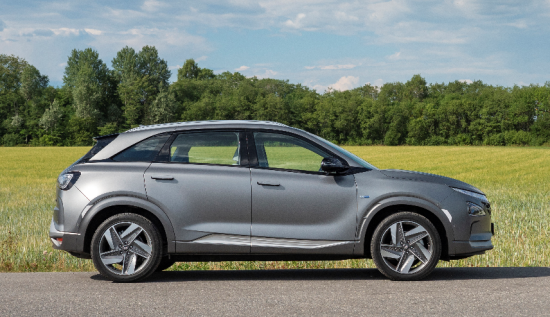 Of the 1,075 units sold so far this year, 767 were sold in Korea and 308 abroad. Domestic sales of the Nexo hit 363 units in April alone, a monthly sales record. The sales volume is expected to further rise thanks to the Korean government’s subsidiary program this year.

The Nexo was awarded the highest rating in the Euro NCAP test, a European car safety assessment program, and the Nexo’s hydrogen fuel cell powertrain was included in the list of the 2019 Top 10 Engines by Ward’s Auto.

In the UK, the Hyundai NEXO Fuel Cell vehicle has been named as a ‘game changer’ at the annual Autocar awards, in recognition of its trail-blazing zero emissions hydrogen fuel cell technology.

NEXO’s fuel cell electric powertrain offers increased performance over its ix35 Fuel Cell predecessor. An on-board electric motor produces 163PS, drawing power from an under-hood fuel cell stack, which combines oxygen from the surrounding air with hydrogen from NEXO’s high-pressure storage tanks. With full tanks of hydrogen on board, NEXO is capable of travelling 414 miles (WLTP), before being able to refuel in just a few minutes.

Outside of its environmentally friendly powertrain, NEXO also has an advanced air purification system which filters 99.9% of very fine dust (PM2.5). The vehicle shows the exact amount of air purified on the display panel in the car.

NEXO has also been independently awarded the UL Bio Environmental Seal for the use of bio fibers from sugar cane waste and vegetable plasticizers in the headliner and carpet areas, bioplastics from sugar cane and corn waste in door, seat, pillar and console trims and biopaint extracted from rapeseed and soybean oils for the dashboard and center console.

Hyundai Motor expects the Korean government’s policy to expand green cars in Korea to boost Nexo sales to around 5,000 units this year.

The start of major things from Hyundai.

They are installing the equipment right now to up production of fuel stacks to 40,000 a year.

Some of those will be for buses etc, but they, like Toyota, are obviously confident of being able to sweat a lot of cost out, or they would never be able to shift these quantities of cars.

I recall the year 2004 when Mercedes started mass production of FCVs.

Good news for FCEVs, Hyundai, Toyota and Honda and others.

Near future mass produced FCEVs will also come from half a dozen and more China vehicle manufacturers in 2020-2021-2022 etc.

New H2 on board storage tanks will soon allow up to 4x the H2 in about the same space as current tanks, for possible extended range of up to 2000 km or to allow much smaller H2 tanks.

I can recall when Daimler had the NECAR that reformed methanol to hydrogen for the fuel cell. One went across the U.S. to prove capability.

You recall when Mercedes started MASS production of fcevs in 2004?

I recall some prototypes, I don't recall anything which remotely resembled mass production, nor any announcement by Mercedes that they intended any such thing, nor can I locate anything about such an event on the web

Perhaps you would be good enough to provide your linked sources, as otherwise your claim sounds complete invention.