DENSO, with semi-conductor supplier Hitachi Power Semiconductor Device, Ltd., has developed a high-efficiency diode for alternators for gasoline and diesel engine vehicles. Production of alternators equipped with the newly developed diodes will start for vehicles to be sold in Europe in FY2019, and will be rolled out to manufacturing group companies around the world.

The diode’s function in the alternator is to flow current in a certain direction and rectify generated alternating current to direct current. The jointly developed diode significantly reduces the power conversion loss by increasing the efficiency of the function. The new diode improves the power generation efficiency by about 6% compared to conventional products and help improving fuel consumption. 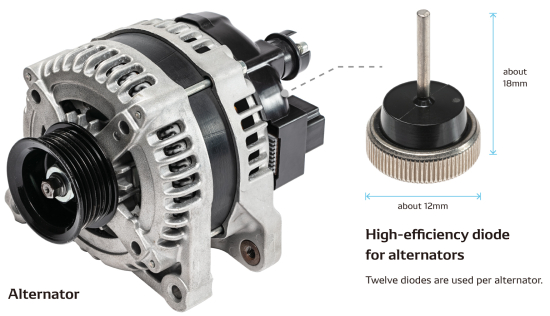 DENSO manufactures 25 million alternators annually in more than 10 countries. If all the diodes were replaced with the new high-efficiency diodes, carbon dioxide emissions would be reduced by 30 tons annually.

The new diode is developed as a component that fits the conventional alternator. DENSO and Hitachi retained the conventional shape of the diode and increased the efficiency of rectifying function by simplifying IC control function and applying a 3D-design located IC tip sterically.

Although vehicles are being increasingly electrified, the internal combustion engine (ICE) with an alternator still accounts for 80% of the global market. 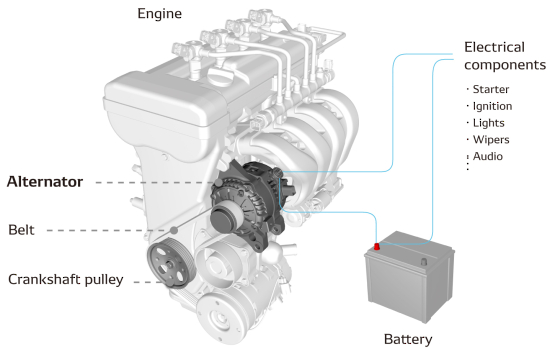 Replace all those potentially to be built ICEs with electric drives and you can save millions of tons of CO2 more than with those super diodes.

The press release reads as word salad and sheds no further light on this.

Schottky-barrier diodes have very low forward voltage drop and thus decrease losses in rectification.  Whether this has anything to do with the specific improvement here or if it's achieved by some other means is totally unclear.

6% improvement in rectifying alternator output...kinda late in the game unless they saved money using the newer diodes.