With nuclear power facing an uncertain future in many countries, the world risks a steep decline in its use in advanced economies that could result in billions of tonnes of additional carbon emissions, according to a new report by the International Energy Agency.

Nuclear is the second-largest low-carbon power source in the world today, accounting for 10% of global electricity generation. It is second only to hydropower at 16%. For advanced economies—including the United States, Canada, the European Union and Japan—nuclear has been the biggest low-carbon source of electricity for more than 30 years and remains so today. 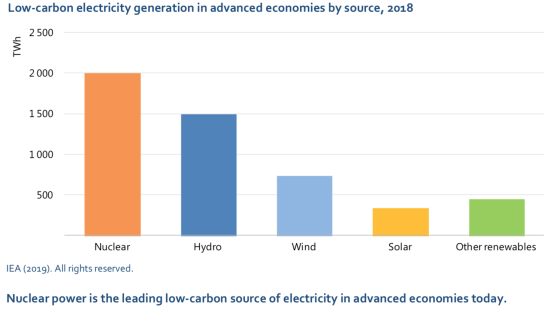 Over the past 50 years, the use of nuclear power has reduced CO2 emissions by more than 60 gigatonnes: nearly two years’ worth of global energy-related emissions.

However, the future of nuclear power is uncertain as ageing plants are beginning to close in advanced economies, partly because of policies to phase them out but also as a result of economic and regulatory factors. Without policy changes, advanced economies could lose 25% of their nuclear capacity by 2025 and as much as two-thirds of it by 2040, according to the new report, Nuclear Power in a Clean Energy System.

The lack of further lifetime extensions of existing nuclear plants and new projects could result in an additional 4 billion tonnes of CO2 emissions.

Some countries have opted out of nuclear power in light of concerns about safety and other issues. Many others, however, still see a role for nuclear in their energy transitions but are not doing enough to meet their goals, according to the report.

With its mission to cover all fuels and technologies, the IEA hopes that the publication of its first report addressing nuclear power in nearly two decades will help bring the topic back into the global energy debate. The report is being released during the 10th Clean Energy Ministerial in Vancouver, Canada.

The new report finds that extending the operational life of existing nuclear plants requires substantial capital investment. But its cost is competitive with other electricity generation technologies, including new solar and wind projects, and can lead to a more secure, less disruptive energy transition.

Market conditions remain unfavorable, however, for lengthening the lifetimes of nuclear plants. An extended period of low wholesale electricity prices in most advanced economies has sharply reduced or eliminated profit margins for many technologies, putting nuclear plants at risk of shutting down early.

In the United States, for example, some 90 reactors have 60-year operating licenses, yet several have already retired early and many more are at risk. In Europe, Japan and other advanced economies, extensions of plants’ lifetimes also face uncertain prospects.

Investment in new nuclear projects in advanced economies is even more difficult. New projects planned in Finland, France and the United States are not yet in service and have faced major cost overruns. Korea has been an important exception, with a record of completing construction of new projects on time and on budget, though government policy aims to end new nuclear construction.

If other low-carbon sources—i.e., wind and solar PV—are to fill the shortfall in nuclear, their deployment would have to accelerate to an unprecedented level. In the past 20 years, wind and solar PV capacity has increased by about 580 gigawatts in advanced economies. But over the next 20 years, nearly five times that amount would need to be added. Such a drastic increase in renewable power generation would create serious challenges in integrating the new sources into the broader energy system. Clean energy transitions in advanced economies would also require $1.6 trillion in additional investment over the same period, which would end up hurting consumers through higher electricity bills.

Policy makers hold the key to nuclear power’s future. Electricity market design must value the environmental and energy security attributes of nuclear power and other clean energy sources. Governments should recognize the cost-competitiveness of safely extending the lifetimes of existing nuclear plants.

The USA has something in excess of 500,000 tons of elemental uranium already mined, refined and sitting in inventory.  Most of this is "depleted uranium".

It would take only a bit more than 1000 tons of uranium a year to supply all the energy used in the United States.  The energy potential of even "depleted" uranium can be tapped with fast breeder reactors.  The EBR-II proved that sodium-cooled fast reactors can be passively safe.  There really is no reason we aren't already a carbon-free economy except for the anti-nuclear hysteria ginned up by pro-fossil and anti-human interests.

I'm not exactly a friendly oriented proponent of nuclear fission but I definitely support wholeheartedly nuclear fusion. The newer stellerator type reactor is far more promising than the tokomak type. Latest results worldwide in this technology log achievements beyond expectancy. Despite the progress that has been currently achieved, much more research remains to be invested to arrive at the final goal of success.
Achievement of this goal presents unlimited energy without tons of radioactive waste to be secured for centuries with all subsequent safety risks. It is my personal conviction that investing time, effort and finances in nuclear fusion now is a far better choice than an incalculable risk in nuclear fission. I prefer a safe and non-radioactive future for our descendants.

yoatmon, someone appears to have forgotten to tell you about neutron damage and neutron activation.  Briefly, high-speed neutrons knock atoms out of place in crystals, transmute others, and cause both physical and radiological changes in most if not all materials.  Other than the B-11 + p -> 3 α reaction (which requires temperatures about 10x as high as D-T fusion) there are no possibilities in the offing which don't generate more high-energy neutrons than actinide fission does.  D-T is a particular offender in this regard, as 80% of the energy of the reaction comes off as a 14.7 MeV neutron and only about 3.7 MeV in the alpha particle.

Neutrons can't be confined magnetically, and neutron damage to the fusion vessel wall is going to limit its lifespan AND make it radioactive.  Worst of all, the damage isn't something you can mostly restrict to fuel elements that you are replacing on a regular basis anyway:  that "first wall" is an essential part of the fusion reactor structure, and replacing it is going to require working in a rather "hot" environment.  This means it won't be cheap.

Commercial nuclear fusion has been 20 years away for the last 60 years.  That seems as true today as it was then.  Perhaps it can be made to work in space, but I'm not seeing it here.

Read an interesting story at Greentech Media about modular and advanced reactor concepts.
Never a big fan of conventional LWR mainly because of their size and cost (I don't like jumbo jets, 4000 passenger cruise ships, or oversize anything). Having experienced the cost and schedules problems of Plant Vogtle 1first hand when I worked at Southern Company Services, their current situation is no surprise.
Hoping modular reactors succeed and soon!

Too bad the current nuclear industry drove itself out of the affordable e-energy market. Will future smaller modular reactors succeed where conventional LWR have failed? SMRs may succeed if they are transportable and mass produced at a much lower cost per megawatt to compete with current and near future low cost REs. The end product would have to be close to or below $0.03/kWh instead of $.20/kWh to $.25/kWh for current new NPPs.

Alleged low cost downsized nuclear reactors do not protect the climate nor anything else. The only thing they protect is the industry producing them.

Okay, yoatmon is now outed as a Greenie propagandist.  He couldn't know what he's saying because there are no small modular reactors even under construction yet, so he's making assertions wholly without evidence.  When it comes to projections, he's taking his cues from the ideologues rather than the engineers.  The engineers say the opposite of what he's saying.

The countries and regions with the lowest GHG emissions in their electric grids (approaching zero) are the ones which rely on hydro and nuclear.  I have repeatedly demanded evidence from the ruinables people that their precious unreliable wind and solar can do the same.  The evidence so far is that going "renewable" makes it HARDER to cut GHG emissions; Germany is a particular case in point.  This suggests that the push for "renewables" instead of nuclear is driven by dark money from the fossil fuel industry.

The real problem with nuclear is the rising (initial and ongoing) very high cost of new NPPs. Electricity at $.22 to $.25/kWh does not compete well against REs and NGPPs and is difficult to sell. Recent REs are offered (in southern Alberta) at around $0.03/kWh without storage and around $0.06/kWh with suffisant storage for 24/7 operations.

With the total cost NPPs still going up and REs cost going down the world will soon get 10X more energy from REs than NPPs for the same $.

All bio and fossil fuel power plants could be progressively closed by 2050 or so.

When I worked at Southern Company almost 40 years ago I could see that large scale LWR were risky, capital intensive ventures. At that time Vogtle 1 cost over $10 billion and required help from Georgia EMC. France and Duke Power at least were smart to settle on a standard design which reduced risks. NPP have an outstanding safety record, though I still believe that scaling up from the original Nautilus submarine design was not the best idea. Like a super sized jumbo jet if one fails like at Fukushima it becomes a global disaster.
Small modular nuclear reactors may not need government support and are less capital intensive than a 1400 MW LWR. As EP points out if you want to go zero CO2 you need Nuclear and Hydro, or you can forget about any Hydrogen economy.

Fast reactors can use depleted uranium from enrichment for centuries,
they do not have to be breeder.
Attempted intimidation using insults is childish and mentally deranged.

Just a note that I am absolutely on board for small nuclear.

I am also hopeful that the Chinese will substitute them into the coal plants they are still building, as some of the hight temperature versions may be capable of being plugged in to the existing generation equipment.

Having said that, renewables have dropped in cost far more than I thought probable, for instance when I wrote a blog which laid bare that the UK off shore wind build was going to cost a fortune as the maintenance and replacement schedules were entirely unrealistic.

Nuclear to run baseload especially where the main issue is the heavy load in winter rather than the summer airconditioning peak is an altogether better option though.

@ EP
For your personal information you may take note that I'm neither a green propagandist nor a leftist and least of all a rightist which you apparently seem to be. In your world there is no room for other opinions unless they are the same as yours. Like Henry Ford stated about his tin Lizzies: " Any color is all-right with me as long as it is black". Apart from that he was not as intolerant as you are. You would have made an even better schoolmaster than an engineer. One of your favorite hobbies seem to be to schoolmaster everyone with a different opinion than what you favor.

A recent cost evaluation by the nuclear industry claims that a group of 6 to 10 small reactors may cost up to twice as much as one 1800 large reactor unless the smaller units are mass produced (over 1000 copies) and are easily transportable to end location.

In reality, neither of those two conditions may happen before 2050+. It seems that the world (with the exception of China and So-Korea) may have to continue paying very high price for large nuke reactors or revert to REs with NGPP plants or Hydro as back ups.