DOE: Growth in US vehicle-miles of travel and number of vehicles outpaces population growth

Vehicle miles traveled (VMT) in the US was seven times higher in 2017 than in 1950, according to the US Department of Energy (DOE). The number of vehicles in operation was more than six times higher in that same period, while the resident population doubled.

Growth of VMT and vehicles slowed from 2008 to 2011 but continued the upward trend thereafter. Because the number of licensed drivers grew more slowly than VMT did, the average miles per driver increased each year. 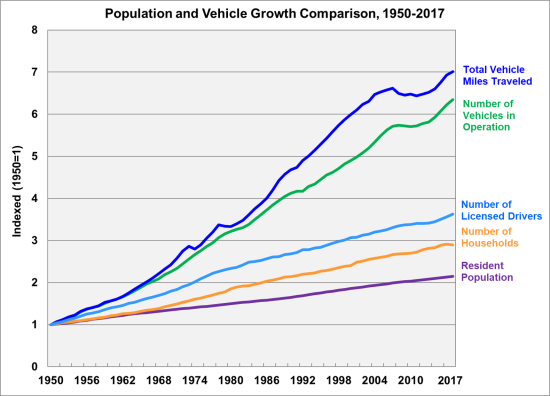 The poor quality and/or the absence of up-to-date public transportation vehicles and systems in North America is one of the main reasons why we keep buying and using private vehicles so much.

Electrifying the fleet, without major improvements in the public transportation sector, may not help but make it worse.

A few $T will be required over the next 20-50 years to rebalance the situation with a decent electrified public transportation system.

The increase in VMT is due to longer commutes.  Longer commutes are forced by the ethnic cleansing of the majority population from urban areas.  Public transportation is not the solution, it is a big part of the problem; it allows the criminal population to move freely to find victims.  Needless to say, with a very few exceptions public transportation in the US is unsafe for the majority population because it does not enjoy "civil rights" protections and even the most vicious acts against it are not prosecuted as hate crimes.  Getting into a confined space with members of the predator population is risking robbery or worse, especially if outnumbered.  That is why the personal automobile continues to be very popular; it's not a lifestyle, it's a necessity.

Where required (in many large and mid-size USA cities) existing and future public transportation systems may have to be well quipped with face/body identification cameras to continuously identify users and catch the trouble makers and bar/block them from further use.

Greens and a few other pro immigration groups may scream but there are not to many other solutions. Adding many thousands police officers would be too costly.

Where required (in many large and mid-size USA cities) existing and future public transportation systems may have to be well quipped with face/body identification cameras to continuously identify users and catch the trouble makers and bar/block them from further use.

This has already happened in traffic enforcement.  What happens is that there are "too many minorities" among the troublemakers and the ban on troublemakers is dropped as "racist".  Greens and other leftists never demand that the minorities behave themselves, because that is also "racist".

Ways will have to be found to convince troublemakers to behave, other wise it may be the progressive end of decent safe public transportation.

A middle road solution may be with smaller (unmarked 6 to 10 passengers re-enforced e-vehicles, restricted to pre-paid members) with a UBER like contact system, at let the opposition cry. This restricted system could be established now as a UBER-2 etc.

@EP and HD
Whatever socio-racial problems there are in the USA, the horse has left the barn, the genie has gotten out of the bottle...We will have to endure for a while...
THE number 1 peaceful solution for the long-term future of the USA is to limit welfare support to ONLY ONE child per mother. A welfare mother cannot keep reproducing illegitimate children one after another when taking advantage of hard-earned taxpayers' money. Any women on welfare should be on verifiable birth control like the IUD that can be identified via sonography scan, or a Norplant that can be verified physically.
At the same time, the fertility rates for tax-paying parents should be boosted, in the form of lower income tax % for each additional child in the family. This would benefit tax-paying parents and give the incentive to have more kids, while lower incentive for fertility for non-tax-paying families. This will lead to social prosperity and improving social sustainability. The current welfare situation and the demographic trend are not sustainable.
Over time, the lower fertility rate of welfare mothers in comparison to that of non-welfare mother will reduce the proportion of troublesome population.

As far as dealing with increase in VMT, we will have to push for rapid decarbonization of transportation...The horse has left the barn for 7-8 decades now, ever since GM-Oil conglomerate bought electrolley lines and cars and crushed them, while urban planning policies allowed huge urban sprawls, including zoning policies that forbid mingling of business district with residential area, plus socio-racial disharmony leading to abandoning of inner cities of the middle class . Let's guess who's the boss...who's in control of the goverment, eh?

Where I came from, many people lived right above their shops, offices, or small businesses, thus significantly reduces commuting requirement. We used to live on a 3-story house that the 1st floor was used for business office, thus no commuting for my parents. Why can't that be done for the USA's?

However, troublemakers would have a tendency to move from buses/subways to elevators and keep being a nuisance?

Education and effective birth controls may be the best long term solutions?

Ways will have to be found to convince troublemakers to behave

Publicly noticing such misbehavior is "racist" and gets the noticer fired from their job, hounded out of social circles and otherwise un-personed.  Examples include "Barbecue Becky" (who called police on some blacks using a charcoal grill where charcoal fires were prohibited due to wildfire hazard) and Natasha Tynes (who may lose a book deal because she expected a black MTA employee to follow the MTA's own posted rules about not eating on trains or platforms).

it may be the progressive end of decent safe public transportation.

It's already gone.  "Eating, drinking, smoking and littering are banned on Metro buses or trains and in stations. However, the Metro Transit police chief had advised officers in a Wednesday email to stop writing tickets for fare evasion, eating, drinking, spitting and playing music without headphones until further notice."  The only reason the administration did this is because the only people who won't follow the rules are minorities, which makes enforcement "racist".  That is why nothing works any more.

The USA is headed for a reset, probably a violent one.  Until then, the decay of everything in the commons will continue.  Public transit is leading the way to collapse.