The study will define the concept and basic engineering for onsite production of renewable jet fuel from air at Rotterdam The Hague Airport. It will enable a cost estimate for both the actual construction of the plant and the fuel itself, which will be decisive for further project development.

Following the study, a demonstration plant is to be realized and commissioned on the premises of the airport, producing about 1,000 liters of renewable jet fuel per day. This would be the first time ever that renewable jet fuel from air production exceeds laboratory scale of a few liters per day. 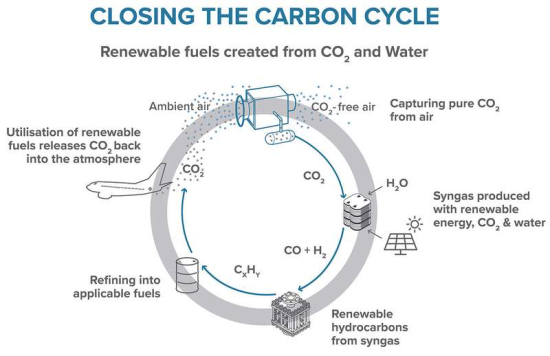 A series of proven technologies are linked to each other to achieve this:

SkyNRG, the global market leader for sustainable aviation Fuel solutions, is in this project responsible for the commercialization strategy. The first potential customer is Transavia.

The demonstration plant will be relatively compact. The architectural integration by Rotterdam based Urban Crossovers & Blueroom will ensure that the plant is part of the overall RHIA campus and fit in both its size and in its objectives.

The set-up of this plant is facilitated by the foundation Rotterdam The Hague Innovation Airport (RHIA), which was established by the airport and the City of Rotterdam. The foundation focuses on promoting four issues—Entrepreneurship, Energy & Environment, Education, and Emergency—through several innovative projects. The study on renewable jet fuel from air is the first of these projects.

It's the zombie of Green Freedom, only now with an unreliable energy supply!

Looks like greenwashing to me.
Better to get the CO2 from the steelworks in the DMX project - more concentrated CO2.
1 Ton of jet fuel per day - at what cost.
I do not think this will scale, so they'd be better putting their solar power into the grid, and/or buying electric buses.

Replace the renewable energy source with a small modular nuclear reactor and then you've got something.

@Nick, or just put them on the grid.
A 747 burns about 10 tonnes of fuel / hour, so if you could reduce the number of flights by 1 per week, you'd be ahead.
Much easier to electrify ground or sea transport and just leave aviation alone, or reduce the number of planes flying.
A carbon tax on jet fuel would "help".

Jet engines are straight through oil burners that eat up tons of fuel and produce tons of pollution and and CO2 in the upper atmosphere; Hopefully someday they can be replaced by hydrogen turbines, FCs and and/or electric motors

Replace them with beamed electric power.

@EP,
lets assume it works, and can handle clouds etc.
How could you do beamed power across oceans ?
You would probably want a station every 10 miles.
That is a lot of stations (on boats, in this case).

How could you do beamed power across oceans ?

Aerostats at 160,000 feet or so.  At that altitude the horizon is some 7 degrees (420 nautical miles) away; it wouldn't take too many to span the Atlantic.