Researchers at Chalmers University of Technology, Sweden, have developed a small, optical nano-sensor for pollution detection which can be mounted onto an ordinary streetlight.

The technology is already in use in western Sweden, and researchers and other interested parties hope that the sensor could soon be used in many broad contexts. A collaboration with the University of Sheffield is also underway. 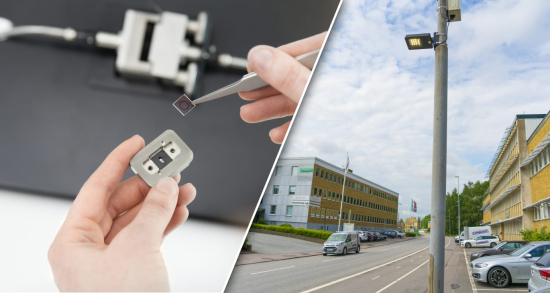 The new sensor technology is being tested in the Gothenburg area, including on this streetlight in Mölndal. (Photo:Insplorion/Johan Bodell)

The new optical nano-sensor can detect low concentrations of nitrogen dioxide down to parts-per-billion (ppb). The measuring technique is built upon an optical phenomenon which is called a plasmon. It arises when metal nanoparticles are illuminated and absorb light of certain wavelengths.

A sensor is also installed on the roof of Nordstan in Gothenburg, one of Scandinavia’s biggest shopping malls, and soon more will be placed along the route of Västlänken, a major railway tunnel construction project, also in Gothenburg.

The technology has already raised interest from several organisations, including the Urban Flows Observatory, an air quality center at the University of Sheffield. They will conduct field testing, comparing the nanosensors’ results with data from a number of British reference stations.

Other interested parties include Stenhøj Sverige, a company, which develops gas and smoke analysers for automotive repair shops and vehicle inspection companies, as well as IVL, Swedish Environmental Research Institute. IVL works with applied research and development in close collaboration with industry and the public sphere to address environmental issues.

The new sensor technology is not limited to measuring nitrogen dioxide but can also be adapted to other types of gases. There is therefore potential for further innovation.