Scientists at the US Department of Energy’s (DOE) Argonne National Laboratory, working in collaboration with Air Force Research Laboratory (AFRL) and Convergent Science Inc., have created a new numerical modeling tool that allows for a better understanding of rotating detonation engines that could one day propel the next generation of airplanes and rockets. 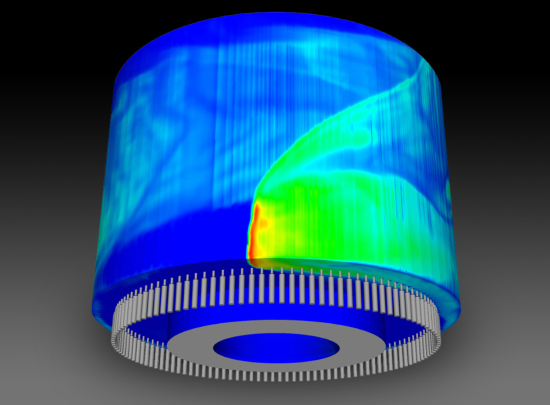 With RDEs, there is an effective pressure gain: The intense and rapid energy release from detonation can be used to generate extremely high thrust from a relatively small combustor.

In addition, these engines are compact, contain no moving parts, are more efficient than conventional combustion systems, provide steady thrust at high frequencies and can be integrated with existing aircraft and rocket engine hardware.

These unique features have made RDEs the subject of extensive research by various agencies, including the Air Force, Naval, and Army Research Laboratories, the National Aeronautics and Space Administration as well as aerospace companies in the United States and abroad.

For example, in a 2012 study, NRL researchers projected that RDEs have the potential to meet 10% increased power requirements as well as 25% reduction in fuel use for future Navy applications. (Earlier post.)

Despite the potential benefits they offer, practical implementation of RDEs has been elusive.

The operation and performance of RDEs depends on many factors. The combustion behavior must be studied and optimized over a large design space for the technology to become practically viable.

Previous numerical simulations gave researchers fundamental insights into the combustion phenomena occurring in RDEs, but they were computationally very expensive, precluding rigorous studies over a wide range of operating conditions.

In an effort to solve this problem, Sibendu Som, computational scientist and manager of Argonne’s Multi-Physics Computations group, and Pinaki Pal, mechanical engineer in Argonne’s Energy Systems division, teamed up with Rankin at AFRL and researchers at Convergent Science Inc. to develop a computational fluid dynamics (CFD) model to predict the combustion behavior of RDEs.

This work was geared toward developing a robust, predictive and computationally efficient combustion model for RDEs.

Pal, who is leading Argonne’s efforts, said computational modeling and simulation can play a major role in designing these engines.

Very few studies have looked at modeling the full-scale RDE combustor geometry, which gives you the most accurate information—primarily because these simulations can be very time-consuming. The new model allows us to capture combustion behavior in realistic configurations accurately and at a reasonable cost.

The model was validated against data provided by Rankin’s experiments at AFRL. The team demonstrated that the CFD model can capture RDE combustion dynamics under varying operating conditions.

Such a model can be used to quickly generate simulation data over a large design space, which can then be coupled with advanced machine-learning-based techniques to rapidly optimize the combustor design. We have demonstrated this approach for internal combustion engines and it can be extended to RDEs as well.

Combustion (nothing in this world is perfect) has saved more human lives than can be counted. Some say it was cooking of food (predigestion) that allowed our ancestors to support the energy needs of our big brains and become human. Chimpanzees still today spend half to 3/4 of the day eating less efficient, raw vegetation to fill caloric needs.