British Columbians are already buying the most zero-emission vehicles per capita in Canada. In the first quarter of 2019, they made up more than 6% of new light-duty vehicle sales in BC. Due to the popularity of its CEVforBC rebate program, the government recently topped up the incentives with another $10 million, part of the $42 million that was committed in Budget 2019. 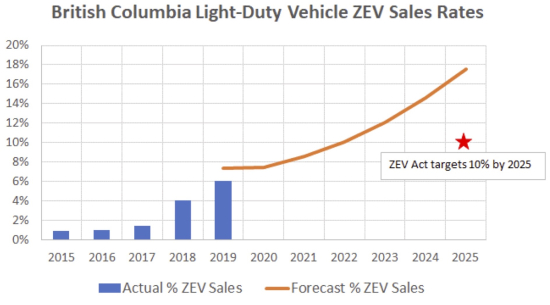 The government announced its commitment to bring in a ZEV mandate on 20 November 2018; ZEVA was introduced in the legislature on April 10, 2019.

ZEVA applies to new vehicles for retail sale or lease, with annual requirements for automakers to meet starting for model year 2020.

Excellent plan. Manitoba and Quebec could do the same and more with clean Hydro power if more people ask for it?

At least PHEVs are included in the list.  BC has a fairly small population over a large expanse of land, and mountains to boot.  Such territory is not easy for BEVs, especially in the winter.  PHEVs still occupy the sweet spot between battery pack size/cost and fuel savings, and that's going to drive sales and perhaps even new model offerings.