Volkswagen’s ID.R, powered by two electric motors, lapped the Nürburgring-Nordschleife in 6:05.336 minutes—faster than any electric vehicle before it. Romain Dumas (F) beat the previous record set by Peter Dumbreck (GB, NIO EP9) in 2017 by 40.564 seconds. 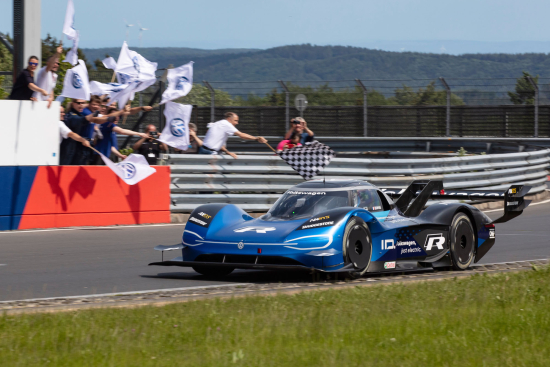 With an average speed of 206.96 km/h (128.6 mph), the ID.R once again underlined the performance capabilities of Volkswagen’s electric drive. The 500 kW (680 PS) electric race car is the racing flagship of the future fully electric ID. product family from Volkswagen.

Within twelve months, Volkswagen Motorsport has set three track records with the ID.R. On 24 June 2018, Romain Dumas achieved the absolute track record of 7:57.148 minutes at the renowned Pikes Peak International Hill Climb (USA). Just three weeks later, he achieved a new best time for electric cars of 43.86 seconds at the Goodwood Festival of Speed in southern England. The new record on the legendary Nordschleife has now been added to this successful run.

With the e-record on the Nordschleife, Volkswagen has once again demonstrated the performance capabilities that come with electric mobility.

This impressive success story is the result of meticulous preparation by our engineers, the flawless work by the whole team during testing and of course a perfect driving performance by Romain Dumas.

To prepare for the Nürburgring Nordschleife challenge, Volkswagen Motorsport gave the ID.R a complete makeover compared to the record outings on Pikes Peak and in Goodwood in just five months.

For this evolved version of the ID.R, the aerodynamic configuration was more strongly adapted to the highest possible speed, rather than maximum downforce. With extensive test laps in the simulator and on the race track, we adapted the ID.R to the unique conditions of the Nordschleife, focussing mainly on chassis tuning, energy management and optimal choice of tyres for the record attempt.

The data sounds impressive but, nevertheless, it's a typical ad spot appealing to the lower instincts of humanity / men.

Kudos to VW and Integral Powertrain for breaking the electric record at the Nürburgring-Nordschleife. Remarkable when you consider that it beat the NIO EP9 record with half the power of the NIO (it has a 1000 kW engine).
It should also be pointed out that Integral Powertrain of Milton Keynes, UK won the 2018 Dewar Trophy and Integral Director, Roger Duckworth is following his father, Keith Duckworth, who won the trophy for the Cosworth DFW.
Integral Powertrain collaborated with Williams Advanced Engineering on the Aston Martin Rapide E 460 kW powertrain. So it would be appropriate that Integral should work on the new Lotus 130 hypercar bringing back the great traditions of Lotus Cosworth cars of the past. Now if they can only get close to the VW ID.R weight of 1100 kg!