An independent study by marine consultancy Deltamarin has found that the ABB Azipod electric propulsion system for ferries could save up to $1.7 million in annual fuel costs per vessel.

By simulating a transit on seven existing ferry routes, researchers found that a ferry equipped with twin 10 MW mid-power range Azipod units consumed less fuel compared to a similar vessel powered by a traditional shaftline propulsion system. Lower fuel consumption also means that the Azipod-powered ferry would reduce CO2 emissions by approximately 10,000 tons per year. This is equivalent to the amount of carbon dioxide emitted by about 2,200 passenger cars annually. 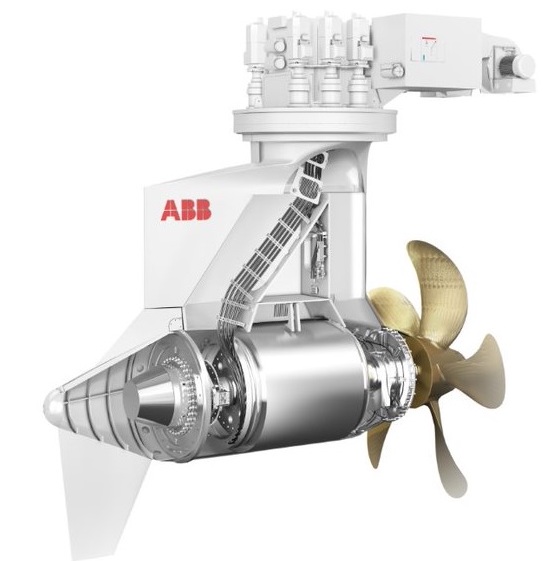 The latest addition to the Azipod propulsor family, the mid-range Azipod series.

The global ferry industry, which transports 2.1 billion passengers every year, according to trade association Interferry, is facing increased pressure to meet the International Maritime Organization’s target of reducing annual emissions by 30% by 2025.

To help ferries improve energy efficiency and lower emissions, ABB is launching a new series of mid-power range Azipod propulsion systems in June 2019. The latest Azipod series will be available in the 7.5 to 14.5 MW power range and will fill the gap between the low and high-power range of Azipod propulsors already in the market.

The Azipod propulsion system, in which the electric drive motor is in a submerged pod outside the ship hull, can rotate 360 degrees to increase maneuverability and operating efficiency, and has a proven ability to cut fuel consumption by up to 20% compared to traditional shaftline propulsion systems.

The latest Azipod M series is equipped with ABB’s fourth-generation permanent magnet motors that draw on proven Azipod propulsion technologies and have been refined to further increase power and maximize efficiency. The design simplicity of the system provides increased robustness and reliability, at the same time allowing for ease of maintenance.

With this expansion, the Azipod® propulsion family now covers the power range of 1-22 MW and is available for vessels from smaller crafts to icebreakers capable of independently operating in the harshest conditions. In addition to ferries and RoPax vessels that carry both vehicles and passengers, the mid-power range will also be applicable for larger offshore construction vessels, midsize cruise ships and shuttle tankers.

ABB has already received several breakthrough orders in the ferry segment, including an Azipod propulsion system for an LNG-powered Viking Line vessel due for delivery next year. Azipod propulsion was also preferred by Finnish shipping company Wasaline for a recently ordered dual-fuel and battery power ferry, which will operate between Sweden and Finland.