IHS Markit: Canadian oil sands production to be ~1M barrels higher by 2030 but with lower annual growth; boosted by deterioration in Venezuela 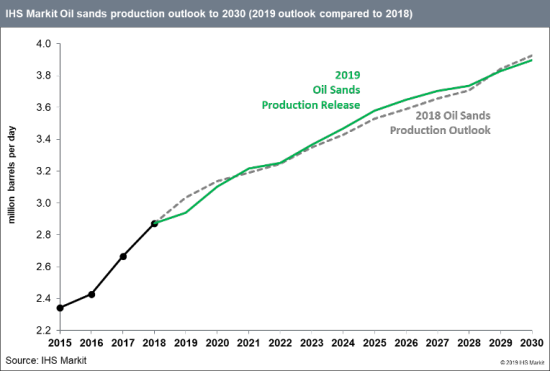 IHS Markit expects average year-on-year supply additions to be below 100,000 barrels per day (b/d) in the coming decade. By contrast, growth over the current decade regularly averaged additions in excess of 150,000 b/d. 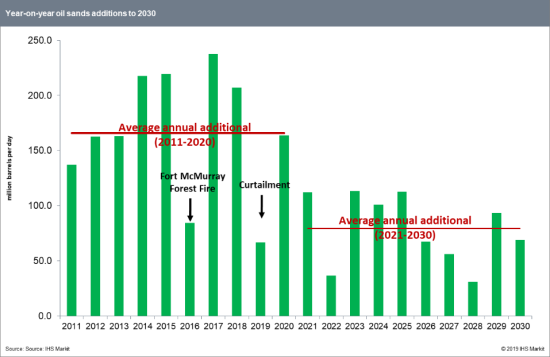 Transportation constraints such as a lack of adequate pipeline capacity and the resulting sense of price insecurity in western Canada have weighed on new large scale incremental investments in the oil sands, said Kevin Birn, vice president, IHS Markit.

Large scale oil sands projects take two, three, four or more years to be brought online and so the reality of a slower pace of investment and growth in the Canadian oil sands is taking shape. Yet, ironically, the call on Canadian heavy sour crude oil—the principal export from the Canadian oil sands—has never been greater as the rapid deterioration of Venezuelan output tightens the supply of heavy sour crude globally.

IHS Markit not only expects the growth profile for oil sands to be different in the coming decade but the drivers of growth will also be fundamentally different. Future growth will mostly come from existing projects and facilities as opposed to new projects, according to the forecast.

The 10-year forecast expects two-fifths of the anticipated rise in oil sands production to 2030 will come from ramp-up of projects in construction or recently completed. Nearly one-quarter of the growth will come from projects that are on hold but where some construction or site clearing has already begun and debottlenecking of existing operations. Less than one-third of anticipated growth is expected to come from new projects, IHS Markit says.

The shift towards more modest year-on-year gains had been expected to occur earlier, with IHS Markit anticipating that 2019 would be the pivot point. However, the decision by the Government of Alberta to artificially reduce output via a curtailment policy has deferred some of the anticipated production gains that would have occurred in 2019 to 2020.

Despite the forecast for slower rates of growth, there is still upside potential in the coming decade for the Canadian oil sands, Birn said.

The key to unlocking further upside growth potential in the Canadian oil sands will be the ability of the government and industry to restore confidence that the crude oil produced in western Canada can get to markets at a reasonable transportation cost.

The annual rate of increase of Tar Sands production may be further affected by delays in pipelines construction. New oil tanker rail cars may have a positive effect by 2020 but another major accident may not help. The introduction of more PHEVs, BEVs, FCEVs, e-buses, e-trucks will start to reduce demands by 2030 or so.

North America's politicians are working overtime to slow the transition to clean energy; bought by fossil fuel campaign donation money. The U.S. and Canada keep electing the very people who work against their best interests, stupid thing to do.

California had a set of measures to promote PHEVs, but as soon as commercial offerings able to qualify for the incentives were set to hit showrooms CARB moved the goalposts so that consumers couldn't get the incentives.  California is doing its best to shut down Diablo Canyon despite DC providing electricity far cheaper than any of the "renewable" offerings claimed to replace it.  In the near term, the power to replace DC's generation would come from (you guessed it) natural gas, benefitting SEMPRA (on which board Jerry Brown's daughter sits).

If you scratch a professional "environmental activist", odds are at least 90% you will find someone taking money from the fossil-fuel lobby.