Cadillac is expanding the availability of Super Cruise to an additional 70,000 miles of compatible, divided highways in the United States and Canada. This expansion will make the true hands-free driver assistance feature available on more than 200,000 total miles of compatible highways by the fourth quarter of 2019. 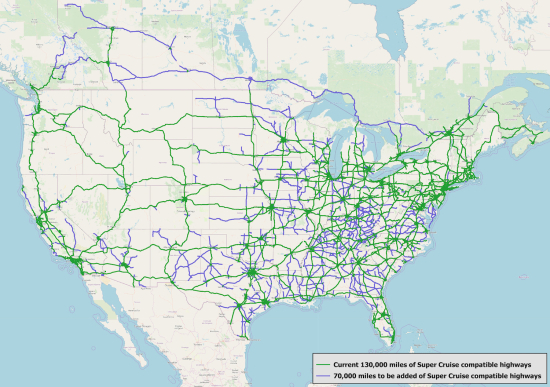 To date, Super Cruise has been available on more than 130,000 miles of limited-access freeways. The expansion builds on Super Cruise’s combination of precision lidar map data, high-precision GPS, a state-of-the-art Driver Attention System and a network of camera and radar sensors.

Some of the divided highways added will include limited intersections and traffic control devices. In the cases of railroad crossings, pedestrian crossings, stoplights or stop signs, Super Cruise will alert drivers to take back control of the vehicle. As always, it remains important for drivers to stay engaged and vigilant at all times while Super Cruise is engaged. 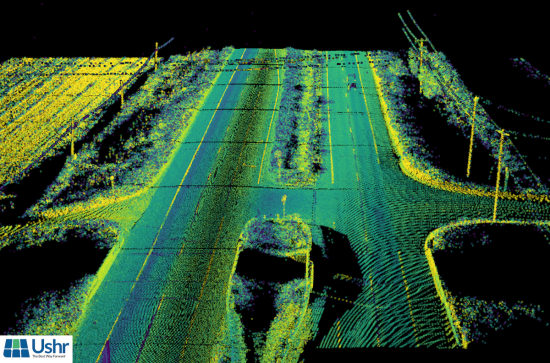 Lidar map image of a compatible, divided-highway (US 127 and W Colony Road) that will be added as a result of the Super Cruise mileage expansion.

To enable the expanded functionality, an enhancement to the Super Cruise system will be available to 2018 and 2019 model year Cadillac CT6 owners through their Cadillac dealer. Following the completion of the system enhancement, the new, additional map miles will be sent to customer vehicles over the air throughout the summer and fall.

In addition to the mileage expansion, the software update will also include performance improvements, enhancements to increase Super Cruise availability and enhancements to the Driver Attention System.

We are constantly working to make Super Cruise the most beneficial system for our customers. Expanding our offering of compatible highways will allow people the ease and convenience of traveling hands-free more often.

Last year, Cadillac made updates to its Super Cruise driver assistance feature based on customer feedback, including making Super Cruise activation easier for the driver and adding dynamic lane offset so that a CT6 with Super Cruise activated can adjust slightly over in its lane for driver comfort when passing large vehicles. Gauge cluster messages were also added, to inform drivers why Super Cruise may be not be available in certain instances.

I think Level 2 systems from anyone are a very dangerous idea.
Either you are driving, or the car is.

There is no half way house.

It has been proven in numerous studies that it is humanly impossible to maintain vigilance once you don't have to do anything.

That is just the way the brain works.

I've ridden in (not driven) a CT6 with this system on Cruise-compatible roads (US Interstate in TX and OK). Based on observations of the driver and general impressions of the vehicle synamics it was really exceptional. With nothing more than ~9 hrs of passive experience it seems like a huge step.

I have only a couple of hours of passenger-seat experience with Tesla Autopilot and it also seems competent at the driver's-assist functions (though truly without bias it seem bit more abrupt -- this is purely an interpretation of passenger senstions, mind you).

Finally in a new Lexus I thought the complete driver assist package took some attention and effort to implement but as an operator I was also impressed.

Having said all that: is the operator actually performing more "safely" with these systems on? In the sense that the car is automatically adhering to metrics like proper following distances better than a person generally does, probably. Also, with all sensors and functions running optimally, it can brake faster and react more quickly. But in the event of unpredictable anomalies, the operator CANNOT react as quickly or with as high a probability of appropriate response as he will when driving UNassisted. You CANNOT "wake up" and deal with errors made by an Assist system.

Automatic driving is the one luxury car feature I would want.
I really don't care about acceleration or top speed, or a super loud stereo.
As Davemart says, you cannot react quickly enough to a real emergency and take over, if it comes out of the blue.
It will be interesting to see how they handle changes ot the roads like road works and diversions. I suppose, as long as you see them coming, you can switch to manual; but if you are asleep or watching "Harry Potter and the Golden Cadillac", you may have a problem.

Everyone seems to be agreed:  there is no realistic chance of keeping a human in the loop to take over from an automated system when it becomes overwhelmed.  If the human is out of the loop, the automated system is going to have to gracefully go to a safe state until the human is fully up to date and engaged, even if the vehicle has to come to a full stop and wait indefinitely.

This does not mean the human has to be on board the vehicle.  Teleoperation is a definite possibility here.  But expecting humans to fix AI screwups in real time is as wrong-headed as Boeing's mods to the 737 MAX.

For sure all the studies agree.
Herman mentions AI needs to adhere to proper safety margins and road rules -unless that would cause an accident.
If the operator gets a chance they will - as we observe every day on the road - push the limits.
Speed has always been a selling point and case in point although consumer legislation bans advertising depicting illegal or dangerous behaviour I'm seeing a series of such ads for the new Mustang on the TV. Just saying that promoting the adrenaline filled stunt driving capabilities can be foreseen.
When the older models have to face off against the razor sharp braking and handling limits we can expect they will be disadvantaged in many circumstances. So there is an ethical question when for example the less well equipped vehicles trucks mcycles are not allowed space for their safe operation.
The obvious simple answer is to have those removed from the road but as legacy rights have a long tradition there needs to be responsibility for the safety of other road users a high priority. As in understanding courtesy to other nearby vehicles.