With an output of up to 310 kW (421 hp), the completely newly developed Mercedes-AMG 2.0-liter M 139 engine is the world’s most powerful turbocharged four-cylinder engine in series production. With this engine, Mercedes-AMG has even exceeded the previously most powerful M 133 by 30 kW (41 hp). Maximum torque has also increased from 475 to up to 500 N·m.

With an output per liter of up to 155 kW (211 hp), the new Mercedes-AMG high-performance turbo engine even ranks ahead of many well-known super-sports car engines.

The four-cylinder is available in two output versions: with 310 kW (421 hp) as the S-model and with 285 kW (387 hp) in the basic version. This product policy logic has already proved successful in the V8-powered AMG Performance models.

The peak torque of 500 N·m (480 N·m for the basic version) is available in a range of 5000-5250 rpm (4750-5000 rpm in the basic version). With this configuration, the AMG engineers have achieved a power delivery similar to that of a naturally aspirated engine for an even more emotive driving experience.

180-degree rotation. Compared to the likewise transversely installed M 260 four-cylinder in the “35” models or the preceding M 133 engine, the new Mercedes-AMG M 139 is rotated around its vertical axis by 180 degrees. This means that the turbocharger and the exhaust manifold are now positioned at the rear, on the side of the firewall when viewed from behind. The intake system is therefore positioned at the front.

This configuration allows the flattest possible and aerodynamically advantageous front section design. Furthermore, the new arrangement allows much improved air ducting with shorter distances and fewer diversions - both on the intake and exhaust side.

Turbocharger. The new twin-scroll turbocharger combines optimum responsiveness at low engine speeds with a high power in the upper rpm range. In addition to this, the turbine housing is divided into two flow passages which run parallel to one another. Together with the likewise divided ducts in the exhaust manifold, this makes it possible to feed the exhaust flow to the turbine separately.

The aim is to prevent the individual cylinders from influencing each other negatively during load cycles, and to improve the gas cycle. The result is higher torque at lower engine speeds, and extremely good responsiveness.

Furthermore, the shafts of the compressor and turbine have roller bearings for the first time—as in the top output variant of the AMG 4.0-liter V8 engine in the AMG GT 4-door Coupé. The roller bearings reduce mechanical friction within the turbocharger to a minimum. The charger therefore responds more readily and reaches its maximum speed of up to 169,000 rpm more rapidly.

Electronic charge pressure control. With a maximum charge pressure of 2.1 bar (1.9 bar in the basic version), the 2.0-liter turbo engine is also the top performer in this respect. The electronically controlled wastegate (exhaust relief valve) allows the charge pressure to be controlled even more precisely and flexibly while optimizing responsiveness, especially when accelerating from partial load. Numerous parameters are taken into account in this process.

Fresh air is used in addition to oil and water to cool the turbocharger. This is directed specifically to the charger from the radiator grille, via the engine cover designed as an air deflector and ducts beneath the hood.

The concept is based on the principles and experience gained with the cooling for the internally mounted turbochargers of the current AMG 4.0-liter V8 engines, starting with the AMG GT in 2014. In addition the turbine housing has integral insulation.

All-aluminum crankcase. The all-aluminum crankcase is a chill-cast unit which excels with outstanding material properties. In this process the molten aluminum is poured into the metallic mould using the effect of gravity. Thanks to its good thermal conductivity, the water-cooled mould allows rapid cooling and solidification of the melt. The result is a fine-grained, dense structure that guarantees very high strength. Complex interior geometries can be realized with the help of enclosed sand cores.

The closed-deck construction—a design from motor racing—ensures outstanding rigidity with low weight, and allows peak combustion pressures of up to 160 bar. The areas around the cylinders are mostly solid, and the cover plate is only penetrated by smaller ducts for the coolant and engine oil. The crank assembly with a lightweight, forged steel crankshaft and forged aluminum pistons with optimized piston rings combines low friction with high strength. The maximum engine speed is 7200 rpm, and peak output is developed at 6750 rpm. The sump features baffle plates so that despite the larger sump, and even under high lateral acceleration forces, there is always sufficient engine oil to lubricate all the relevant components.

NANOSLIDE cylinder coating. To reduce friction between the pistons and cylinders, the linings are coated using patented NANOSLIDE technology. This gives the linings a mirror-like surface for minimal friction, is twice as hard as conventional grey cast-iron liners and therefore makes them much more durable.

NANOSLIDE was developed by Daimler AG, and is protected by more than 90 patent families and more than 40 patents. The coating was first used for AMG’s M 156 engine, has benefitted further AMG engines for many years and can also be found in the Formula 1 engine of Mercedes AMG Petronas Motorsport.

Larger exhaust valves. Repositioning and slightly angling the injection nozzles and spark plug system in the cylinder head made it possible to greatly enlarge the exhaust valves compared to those of the preceding M 133 engine. The larger exhaust cross-sections allow the gases to stream out of the combustion chambers with low losses, and reduce the overall piston venting action.

More efficient cylinder head cooling was achieved by seating rings with a reduced installed height and a cooling borehole near the combustion chamber, in the web area between the exhaust seating rings. The cooling performance was also improved by a near-surface water jacket geometry, a faster flow rate and an optimized volumetric flow rate.

A multi-layered, state-of-the-art corrugated metal seal isolates the cylinder head from the crankcase.

Two overhead camshafts control the 16 valves via weight-optimized roller cam followers. Camshaft adjustment on the inlet and outlet side allows an excellent response and optimises the gas cycle for each operating point.

Variable CAMTRONIC valve control on the exhaust side is another feature, with two cams per valve. The cams have different geometries, so that depending on the cam setting to suit the driving situation, the exhaust valves can be opened for short or long periods—for even better responsiveness at low engine speeds, comfortable and fuel-efficient driving at medium rpm and full power delivery in the upper rpm range.

For the first time, the new high-performance four-cylinder has two-stage fuel injection. In the first stage the particularly fast and precisely operating piezo injectors supply fuel to the combustion chambers at a pressure of up to 200 bar. This is a multiple process at times, and is controlled by the engine management system as required.

In the second stage there is additional intake manifold injection using solenoid valves. This is needed to achieve the engine’s high specific output. The electronically controlled fuel supply has an operating pressure of 6.7 bar.

Cooling system increases power. The high output requires an intelligently conceived cooling system. An additional radiator in the wheel arch supplements the large unit in the front level of the main module. A low-temperature circuit is also used for air/water intercooling. Together with the intercooler connected in series, the coolant flow through the radiators is assisted by a high-performance electric pump. This provides for ideal cooling of the highly compressed charge air, thereby contributing towards optimum engine performance.

Cooling of the transmission oil is integrated into the engine’s coolant circuit, and is assisted by a heat exchanger mounted directly on the transmission. The engine control unit is mounted on the air filter housing, where it is cooled by an airflow.

Electric water pump. The demand-controlled, electric high-performance water pump operates independently of the engine speed. Late activation during warm-up means that the engine block warms up more rapidly, with a positive effect on friction, consumption and emissions. The pump can also be switched on or off as required when driving under less power or at low engine speeds.

Functions such as alternator management, the ECO start/stop function with fast restarting, the gliding function and a petrol particulate filter are also part of the technology package for the new AMG four-cylinder.

Assembly. The new engine is entirely assembled by hand. On the first floor of the AMG engine manufactory in Affalterbach, a completely newly designed production line was installed in which Mercedes-AMG has brought the “One Man, One Engine” principle to a new level together with Industry 4.0 methods that incorporate the latest findings in ergonomics, materials handling, quality assurance, sustainability and efficiency. 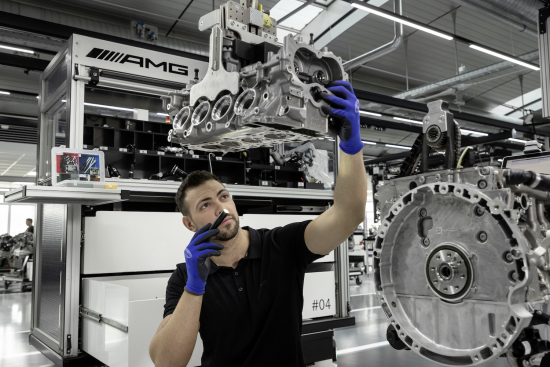 The employees are optimally assisted in their work by digital tools. The focus is on the use of intelligent, flexible technology. The key element in this modern production process is a combination of highly flexible line assembly and preconfigured shopping carts using driverless transport systems. The aspect of sustainability was also a fundamental part of the planning for the new M 139 production line. Production uses renewable energy sources, and considerably reduces CO2 emissions, water consumption and waste.

The assembly cart on which the M 139 is put together was developed with the employees working as a team. It has its own independent power supply and therefore needs no power cables. All the necessary operating fluids and tools are ergonomically arranged on and around the cart, making work easier, minimizing distances and improving efficiency. The integrated tablet PC assists the employee with precise, clearly formulated working instructions. Manuals and guidelines are a thing of the past—manufacturing is now paperless. 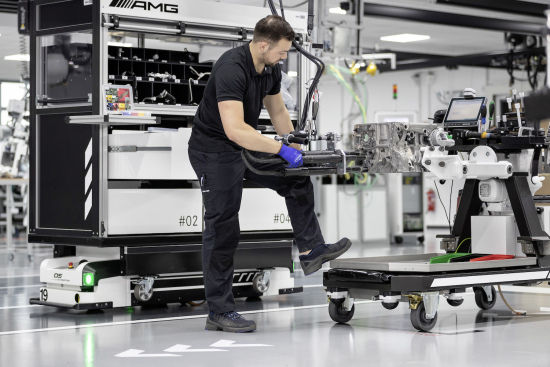 New cordless screwdrivers are immediately to hand, and no longer need to be grabbed from overhead at each station as suspended, wired tools as before. This is why the employees refer to their workplace as “blue sky”, as there are no longer any power cables hanging from the ceiling. The assembly shop makes a bright and airy impression, and creates a pleasant working climate.

Comprehensive digitization improves both the efficiency and flexibility of the manufacturing process: Each tool is connected to the WLAN of the engine assembly shop—enabling and torque settings for the relevant assembly stage can therefore be automated by indoor tracking. Furthermore, all completed tasks are digitally recorded, guaranteeing optimum quality assurance, reproduceability and transparency.

Each assembly technician is followed by a driverless transport system. Its shopping cart has precisely the components needed to complete the engine being assembled.

The transport systems are loaded up at the Mercedes-AMG logistical center in Marbach, and delivered to the production line on a “just in sequence” basis. Autonomous control is also carried out by indoor tracking via WLAN. All components can be digitally tracked.

In parallel with all this, the number of test stations was reduced by grouping several individual stations into three central stations: Drag torque test, leakage test for oil/coolant and fuel systems as well as for complete engine water jacket. The result is a considerable time saving and therefore greater efficiency. Here too, all parameters and measured values are digitally recorded and stored so that the assembly of each individual engine can be tracked.

This engine would be a great place for Mercedes Benz to use some of their Formula One technology. Sure the Mercedes-AMG One uses this technology for the road, but it is a 1231 hp $1 million hypercar.
This is a series production engine and would be great in a "low cost" AMG GT. Nissan has a concept called the Infiniti Project Black S concept car and uses Renault F1 tech. It has a 3 liter 400hp V6, a 163 hp e motor and a 4.4-kWh lithium-ion battery pack.
So put a similar size e motor on this 4 cylinder and you would have a 584 hp PHEV super coupe, more than the AMG GT R!

Too bad all this wonderful mechanical goodness is coming out so near the 'end of life' of the internal combustion engine; however, electric motors have too many compelling advantages over fossil fuel ICEs to be denied.