Spain, Italy, Greece, France and Norway are the most exposed countries to cruise ship air pollution in Europe. Among the major cruise ports, Barcelona, Palma Mallorca and Venice are the most polluted.

Cruises docking in Barcelona emit five times more SOx than the city’s 560,000 cars every year, according to the T&E study, which is based on satellite data of ship movements. 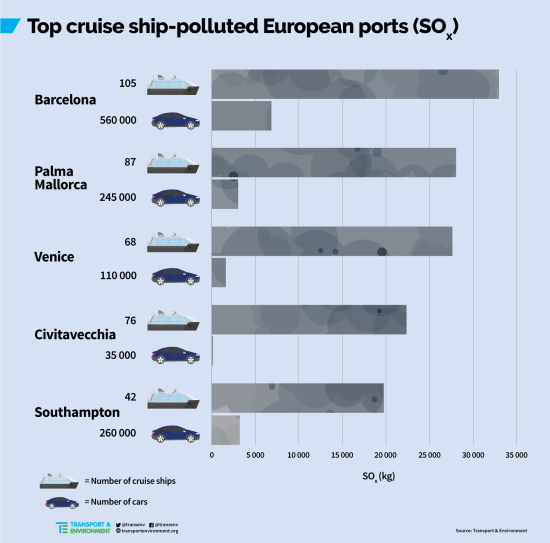 Palma Mallorca (Spain) and Venice and Civitavecchia in Italy are the next worst hit, with Southampton in England the fifth worse for SOx emissions from cruise ships. These emissions form sulfate aerosols and fine particles that harm human health and cause acid rain and acidification of the seas.

T&E said these ports and their countries are so exposed because they are major tourist destinations, where cruise ships make prolonged port calls.

Even in sulfur emission control areas (SECAs), where the most stringent marine sulfur fuel standard is mandated, air pollution from cruise ships remains of great concern.

In Denmark, for example, whose coasts are entirely within SECAs, cruise ships emitted 18 times more SOx in 2017 than all 2.5 million passenger vehicles in a year. This is a reflection of both the effectiveness of the fuel quality directive for road transport fuels and the failure to implement equivalent standards for the shipping industry, T&E said.

Ships’ SOx will still remain considerably large compared to passenger car fleet even after the introduction of the global 2020 marine sulfur cap.

Cruise ships also emit NOx equivalent to 15% of Europe’s car fleet every year. In Marseille, where 57 cruise ships called in 2017, the ships emitted almost as much NOx as one-quarter of the city’s 340,000 passenger cars.

Diesel cars have been the focus of the air pollution crisis in Europe’s cities, but along the coasts of countries such as Norway, Denmark, Greece, Croatia and Malta a handful of cruise ships are responsible for more NOx than the majority of their domestic car fleets, T&E said.

In Denmark, 107 cruise ships analyzed emitted as much NOx in the Danish maritime economic exclusive zone (EEZ) as half the passenger cars operating in the country itself.

The next European Commission will face calls to implement a zero-emission port standard for cruise ships as soon as possible, and then extend it to other ship types. T&E also recommends extending low emission control areas (ECAs), currently in place only in the North and Baltic Seas and English Channel, to the rest of the European seas. Furthermore, the report recommends turning low emissions control areas into zero emission control areas to equally address air pollution and GHG emissions.

T&E said the new global standard for low-sulfur fuel, to be implemented from 2020, is welcome but won’t bring an improvement in ports as high-sulfur fuel is already banned there for cruise ships.

A massive market which is likely to prove that those who declared fuel cells to be fools cells were themselves the fools.

Fuel cells are a fool's solution when shore power is cheaper and requires next to no space on-board.

As for emissions while entering and leaving port, LNG is no doubt going to figure prominently.  Using 5% desulfurized fuel oil to ignite a premixed NG charge will get rid of most of the rest of the sulfur.

The ultimate solution is to go nuclear.  The largest cruise ships in the world only have 96 MW of diesel engines on board.  This level of demand could be met by just 2 NuScale units with ample power to spare, and eliminate all emissions except heat.

The last I heard ships spend time at sea as well as in port, but perhaps that is old fashioned.
If they start building nuclear plants in Europe instead of decommissioning them it might be worth thinking about what they can do.

A ship can be built anywhere.  If Wartsila engines can be manufactured in Korea, there's no reason a pair of NuScale plants can't be built there to go into a hull.

I did a bit of number crunching, and it turns out that Symphony of the Seas has a rated maximum speed of 22 knots.  Assuming that this uses the full power of its 2 19.2 MW diesels (and the other 4 are for non-propulsion loads), a pair of NuScale units should be able to propel the same hull to 30 knots using just over 97 MW.  That would leave ~23 MW for non-propulsion loads, which is what you might have overnight.

Less time between ports means more time playing tourist.  That could be a selling point.

Could they not supply the ships with shore power when docked.
It strikes me as the quickest partial solution to the problem.
@Dave, sadly, yes.
@EP, people are still a bit jumpy about nuclear power, especially post the "Chernobyl" mini-series. Might have to give it a year or two.
Doesn't matter how safe the NuScales are, I would wait a few months.
Make them convert to gas would be the easiest solution for propulsion.

We have Green organizations claiming that natural gas is neither clean, cheap nor necessary.

These people ignore the storage problem (they ALL do), but they're at least saying some of the right things.

@EP: "We have Green organizations claiming that natural gas is neither clean, cheap nor necessary."
For what - electricity generation or shipping ?

Going nuclear in civian shipping won't happen; Gas turbines are cleaner and take up less space than diesel...this is step 1. Step two is developing hydrogen powered turbines; Step three; hydrogen fuel cells and electric drive, with battery buffering.
Additionally, docketed ships are required to use only locations where on shore power is available.

Not everybody realized that (ocean and river) Cruise and most ocean going large diesel powered ships emit so much harmful pollution?

Next generation (2035-2050+) modular small nuclear reactors look like one of the ideal solution but converting most/all ships could easily take another 50+ years. By that time, the environment could be damaged beyond repairs?

An interim solution may be the use of cleaner fuels and engines.

Adding FCs and auxiliary e-motors could reduce the use of the dirty diesel engines and reduce harmful pollution.

For what - electricity generation or shipping ?

RTFL.  You've got everything I've got.

Going nuclear in civian shipping won't happen; Gas turbines are cleaner and take up less space than diesel...this is step 1.

Hydrogen is not something you can store in the limited space of a sea-going vessel.  Not even liquid hydrogen.

Here is what Viking are developing for liquid hydrogen cruise ships:
https://gcaptain.com/viking-planning-worlds-first-liquid-hydrogen-powered-cruise-ship/

The Symphony carries 4x Wärtsilä 12V46F at 177 tons each (708 tons), and 2x Wärtsilä 16V46F at 233 tons each (466 tons) for a total of 1374 tons of engines in addition to the fuel.  A NuScale NSS unit weighs 700 tons full-up.  It would only need enough water for shielding as the ocean would supply water for heat-sinking purposes indefinitely.  The "mission weight" of a pair of them would be less than the weight of diesels plus fuel, for 25% more rated output power.

If people ever get over their nuclear phobia, there are some huge opportunities to eliminate petroleum and all related emissions.