Researchers from Carnegie Mellon University’s Mellon College of Science and College of Engineering have developed a semiliquid lithium metal-based anode (SLMA) that represents a new paradigm in battery design for solid electrolyte batteries. The interdisciplinary research team published their findings in the current issue of Joule.

The SLMA consists of lithium microparticles evenly distributed in a dual-conductive polymer matrix. In a symmetric cell with a garnet-based solid electrolyte, the SLMA shows stable lithium stripping and plating behavior with low overpotential at the current density of 1 mA/cm2 and 1 mAh/cm2 for nearly 400 h. This work shows a significant improvement over previous work based on lithium anode with the same type of solid electrolyte. The method used in this work has great potential for building reliable alkaline metal-based rechargeable batteries. 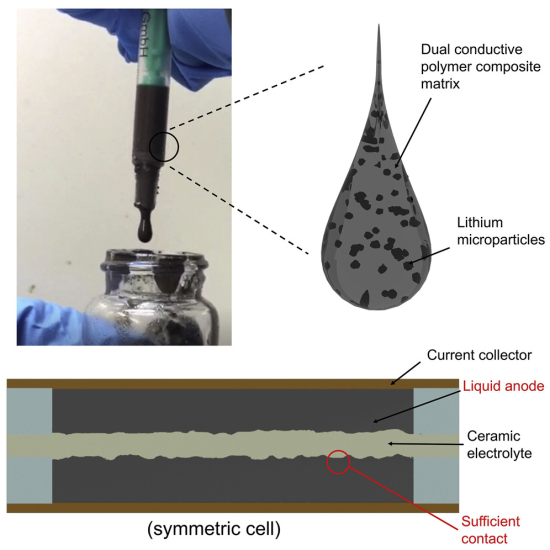 One proposed solution to the volatile liquid electrolytes used in current batteries is to replace them with solid ceramic electrolytes. These electrolytes are highly conductive, non-combustible and strong enough to resist dendrites. However, researchers have found that the contact between the ceramic electrolyte and a solid lithium anode is insufficient for storing and supplying the amount of power needed for most electronics.

Working with the Mellon College of Science’s Matyjaszewski, a leader in polymer chemistry and materials science, and Jay Whitacre, Trustee Professor in Energy in the College of Engineering and director of the Wilton E. Scott Institute for Energy Innovation at Carnegie Mellon, who is known for his work in developing new technologies for energy storage and generation, Li and Wang created a dual-conductive polymer/carbon composite matrix that has lithium microparticles evenly distributed throughout.

The matrix remains flowable at room temperatures, which allows it to create a sufficient level of contact with the solid electrolyte. By combining the semiliquid metal anode with a garnet-based solid ceramic electrolyte, they were able to cycle the cell at 10 times higher current density than cells with a solid electrolyte and a traditional lithium foil anode. This cell also had a much longer cycle-life than traditional cells.

This new processing route leads to a lithium metal-based battery anode that is flowable and has very appealing safety and performance compared to ordinary lithium metal. Implementing new material like this could lead to step change in lithium-based rechargeable batteries, and we are working hard to see how this works in a range of battery architectures.

The researchers believe that their method could have far reaching impacts. For example, it could be used to create high capacity batteries for electric vehicles and specialized batteries for use in wearable devices that require flexible batteries. They also believe that their methods could be extended beyond lithium to other rechargeable battery systems, including sodium metal batteries and potassium metal batteries and might be able to be used in grid-scale energy storage.

This does look an important step in the development of Solid State Batteries (SSB). Contact between the Anode, Electrolyte, and Cathode is critical to the success of the SSB.
I read yesterday about research at Fraunhofer on Solid State Batteries. and their work with EMPA which used a liquid approach to solid-state battery electrolytes.
From the EMPA website:
The (solid) electrolyte consists of a closo-borate compound, which is mixed as a powder and pressed into a layer between the anode and the cathode (the two poles of the battery). However, this method had to be optimized, because the necessary contact between the closo-borate layer is impaired by cracks in the surface of the cathode made of porous sodium chromium oxide (NaCrO2). These cracks prevent continuous contact with the electrolyte, which impedes the flow of ions, i.e. the charge carrier, and thus impairs the charging capacity of the battery.
Note:The closo-borate electrolyte also works with Sodium batteries (Fraunhofer has partnered with the Finnish battery company "BroadBit Batteries" for their dry cathode processing technology. Broadbit is developing a Sodium SSB.
The future of SSB appears to be closely connected to the process now.

The question is where is battery design headed. Are 18650 and 2170 no longer the standard? Will EV batteries use Bipolar 3D designs like ProLogium or EMBATT? What about the 24M semi-solid battery or this semiliquid lithium metal-based anode? We may learn soon.

Seems a bit odd, but the solid interface is important to conduct high current.