SW/TCH Maritime (SW/TCH), an impact investment platform building the first fleet of zero-emissions maritime vessels in the US, announced its investment to construct and own the ‘Water Go Round’ e-ferry in collaboration with Golden Gate Zero Emission Marine (GGZEM), a provider of turn-key hydrogen fuel cell power systems for ships. 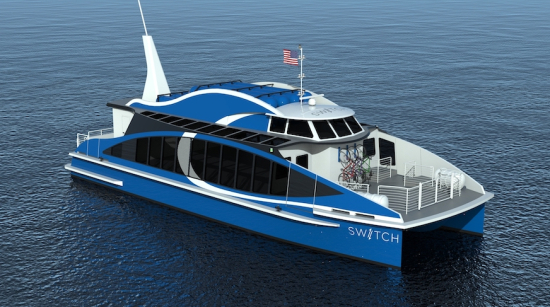 The 84-passenger e-ferry is currently under construction at the Bay Ship & Yacht shipyard in Alameda, CA using private funding from SW/TCH and a $3-million grant from the California Air Resources Board (CARB) through the Bay Area Air Quality Management District (Air District), the administrator of the grant.

The $3-million grant comes from California Climate Investments initiative, a statewide program that puts billions of Cap-and-Trade dollars to work to reduce greenhouse gas emissions, strengthen the economy, and improve public health and the environment, particularly in disadvantaged communities. The project leverages proven technology from partners including BAE Systems and Hydrogenics.

The San Francisco e-ferry will act as the flagship vessel for SW/TCH’s fleet. This comes on the heels of SW/TCH’s earlier announced plans to establish a fully electric ferry in New York City, which is now scheduled for deployment following the proof of concept of the ‘Water-Go-Round’ e-ferry. SW/TCH plans to work with existing ferry operators on both coasts to provide capital to accelerate the adoption of zero-emission modes of transit.

The e-ferries will use all-electric propulsion powered either by hydrogen fuel cells or batteries that are charged with shore power. Scaling this zero-emission technology will only be possible with significant investment in new fueling infrastructure, and SW/TCH is partnering with Clean Marine Energy (CME) to develop electric charging and hydrogen fueling infrastructure onshore.

Backed by the same founders, CME plans to make clean fueling infrastructure available in multiple ports in the US. Both mission-based platforms represent growing investor interest in technologies, assets and infrastructure that stand to benefit from the transition to a clean-energy economy.