A report released by C40 Cities finds that consumption-based emissions from nearly 100 of the world’s big cities already represent 10% of global greenhouse gas emissions. Without urgent action, those emissions are projected to nearly double by 2050.

The new research, The Future of Urban Consumption in a 1.5°C World, was produced in partnership with Arup and the University of Leeds, and cautions that urban consumption-based emissions must be cut by at least 50% by 2030 in order to maintain the possibility of keeping global temperature rise below 1.5°C.

When combined with firm city efforts to reduce local emissions, this would allow cities to deliver 35% of the emission savings needed to put them on a path to 1.5 °C, according to the report.

High income areas, which generate the bulk of emissions, need to cut their emissions much faster—two-thirds by 2030. The research suggests that if nations, business, cities and citizens take ambitious climate action over the next 10 years, cities will be on track to reduce their emissions in line with a 1.5°C world.

Twenty-seven C40 cities have already peaked their production emissions—those emitted locally. However, the C40 network represents one-quarter of the global economy, and 85% of the emissions associated with goods and services consumed within their boundaries are imported from elsewhere.

The place to start is with those who consume the most, the report says. To reach the reductions needed, high-income urban areas must reduce the climate impact of consumption by two-thirds within the next decade, while rapidly developing economies must adopt sustainable consumption patterns as they continue to grow. 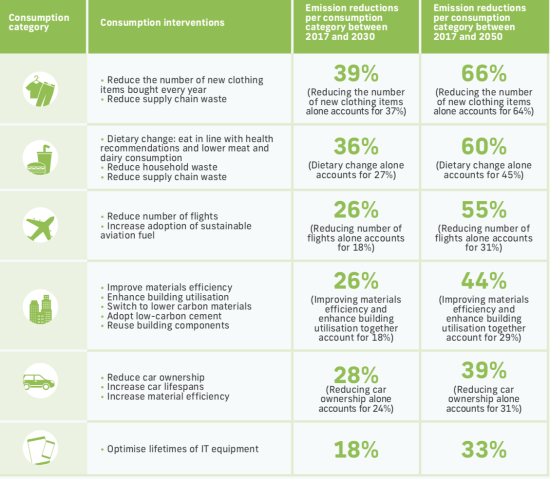 Together these actions would save around 1.5 GtCO2e per year by 2030. When combined with existing city climate commitments, this would deliver 35% of necessary reductions in consumption-based emissions needed to put C40 cities on a 1.5°C trajectory.

This research was made possible thanks to Citi Foundation. C40 is a network of the world’s megacities committed to addressing climate change.