Daher, Airbus and Safran are partnering for the design and development of the wing-mounted EcoPulse distributed hybrid propulsion demonstrator with a maiden flight scheduled in 2022. 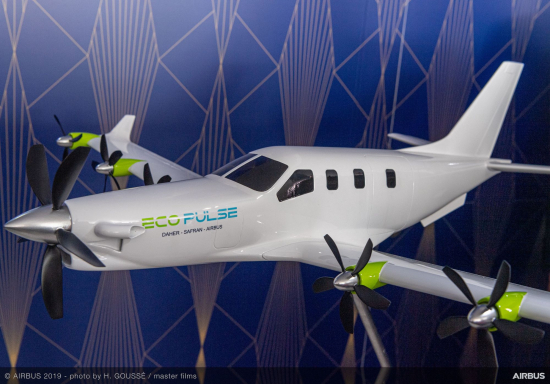 The overall approach spans 3 areas of research and development:

The purpose of this three-way collaboration is to validate technologies designed to reduce CO2 emissions, noise pollution, and create new uses for air transportation.

Safran will supply the entire EcoPulse distributed hybrid propulsion system (excluding batteries), consisting of a turbogenerator (a combined turbine and power generator); an electric power management system; and integrated electric thrusters (or e-Propellers) including electric motors and propellers. The electric thrusters will be integrated into the EcoPulse wing and will provide propulsion thrust, at the same time as delivering aerodynamic gains (reducing wing surface area and wingtip marginal vortices, and therefore drag).

The installation of a distributed propulsion system on a TBM aircraft is an opportunity to boost its efficiency, diversify its missions, reduce its environmental footprint and cut its operating costs.

Safran has developed a technology roadmap for the installation of electric thrusters on aircraft. EcoPulse offers us an excellent opportunity to evaluate and identify the specific features expected by this market, particularly in terms of new hybrid propulsion aircraft projects. Safran intends to position itself as the market leader in this type of propulsion system by 2025.

—Stéphane Cueille, Head of R&T and Innovation at Safran

Airbus will be involved in the aerodynamic modeling of the demonstrator, both to support configuration choices and to enable the development of flight control laws. All these considerations should make it possible to demonstrate the benefits of distributed propulsion, and provide the baselines for the design of optimized distributed propulsion aircraft in terms of methods, tools and outcomes.

This distributed hybrid propulsion demonstrator is a very important step towards preparing the certification standards for a more electric aircraft. It also gives us the opportunity to improve our simulation models and consider their use on larger aircraft.

The distribution of thrust across the wing span is going to increase the total propeller area (increasing propulsive efficiency) and increase wing lift by increasing the effective airspeed.  I'd worry about control issues if there isn't sufficient wash from the central prop to get enough airflow over the rear control surfaces, but presumably the designers are aware of that also.

The design would be a natural for nullification of torque effects using counter-rotating props on the two wings, and also some wingtip-vortex reduction by making the outermost prop blades sweep down at the outside, but I don't see that in this rendering.

Develop the Turbo Gen Set to run on Hydrogen and then you have something...turbos running on fossil fuels are nasty pollution devices.

This is actually a very good way to improve efficiency of even large turbofan transport planes. This is how:
Large turbofan transport planes need ridiculously-large nacelles to obtain ultra-high bypass ratio, but the large nacelles add drags and weight, plus the big heavy fans are also heavy and requiring another low-pressure turbine with shaft, and even another gear drive unit like the most recent Pratt&Whitney geared fan.

The Airbus A400M turboprop transport that can cruise at 485 mph is proof that turboprop can fly fast. However, large propellers produce more vibration, noise, and more prone to failure due to their humongous size, and the mechanical gear boxes are also their weak link, that require more maintenance and higher failure risk.

Much smaller and more numerous propellers driven by e-motors along wing leading edges can overcome the disadvantages of big gear-driven turboprops.
So, we can a 10 or more smaller e-motor driven propellers all along the wing leading edges to obtain ultra-high bypass ratio without requiring humongous fan nacelles. We will only need two turboshaft units coupled with high-speed generators mounted in the nose of the aircraft. So, even with failure of one turboshaft unit, all the e-motors would be still functioning and can still generate 66% of the original thrust, thus single-engine climb performance would be far better than the failure of one turbofan unit in a twin-fan wing-mounted plane.
Seems to be a promising concept.

You forgot one detail, Roger:  doing this as electric motors potentially avoids a conversion from AC to DC and back to AC.  The motors on the wing can be synchronously linked to the turbogenerator(s) and require no conversion whatsoever... and no losses in conversion either.

Your "ultra-high bypass ratio" is the same as my increase in "total propeller area".

I'd have to double-check your calculations about thrust after loss of an engine, but with an electric power pathway there's another possibility:  microwave energy feed to the aircraft for takeoff and initial climb.  Why do all the engines and fuel have to be carried on-board, anyway?

Good point, E-P regarding the use of synchronous motors fed by the frequency of the alternators to avoid the efficiency loss and the weight associated with AC to DC and then to AC conversion. So, we may have one turboshaft connected to one alternator to power one side of the aircraft, while the other turboshaft will do the same for the other side of the aircraft, with rapid switching to all motors power by one alternator should there be failure of one turboshaft. This setup may be competitive weight-wise and cost-wise with existing high-bypass turbofans, while exceeding in term of efficiency, especially much improved single-engine operation.

Regarding your concern about having airflow over the tail surfaces, why not have some e-motors and props mounted on the tail surfaces also? In this way, we will have very positive attitude control of the aircraft regardless of airspeeds and wind gust. The use of ultra-capacitor to help spool up the turboshaft engines and the props rapidly coupled with very positive attitude control at all airspeeds can allow for rapid response to down-burst cells, wind gusts, and will increase safety. Furthermore, there will no longer be the problem of thrust asymmetry in the event of failure of one turboshaft engine, thus will further enhance safety and reduce pilot training time.

Perhaps the Boeing 737-Max 8 should be the first airliner to be experimented with this new electro-turboshaft propulsion method, since it will solve the handling issue with the too big fan nacelles hanging way in front of the leading edges, as well as providing the efficiency needed to be competitive in the market. Go, Boeing, Go!

Regarding the use of microwave energy beamed up from the ground, there might be issues with the effect of very high-energy microwave on the passengers and on avionics and on airframe heating. Perhaps you can enlighten us on these issues.

It would probably work best to have two buses synchronized and interconnected.  You'd only disconnect them if you had a fault somewhere.  Rather than having one bus per wing (and the asymmetric thrust problem if one goes out) it would be better to organize things redundantly the way hydraulics are done.


why not have some e-motors and props mounted on the tail surfaces also?

Not beyond the realm of possibility, but you don't want excessive control authority either.

Clever idea, but proving anything to the point it's allowed on an airliner takes many years.  Example:  the fan in turbofans must turn at a much lower speed than the engine core to keep the fan blades subsonic.  Doing this with a direct-drive turbine has required very large diameter turbine wheels to get sufficient linear speed for energy recovery.  These large turbine wheels (the bulge at the aft end of a turbofan core) are a bit of a packaging problem.  It's long been desired to downsize those turbines, let them run at higher speed and use a gearbox to bring the speed down for the fan, but gearboxes acquired a reputation for trouble so it's only now that geared turbofan engines are reaching the market.

Using electric drive on all the fans would potentially allow one engine core to drive all the fans in the case of an engine-out situation.  The reduction in asymmetric thrust would allow the vertical stablizer and rudder to be downsized, among other savings.  It would also make it much easier to implement tricks like air pumps for boundary layer control.  Not something I expect to ever see fly, though.


there might be issues with the effect of very high-energy microwave on the passengers and on avionics and on airframe heating.

Aluminum aircraft skins make very effective Faraday cages.  You'd need to put screen or some other conductive coating over the windows, but that's about it.  The bigger issue is incorporating microwave capture and conversion into the skin at an acceptable weight penalty, and making it work over the wide range of angles of incidence that you'd have to accomodate.