In April 2019, 6.7 GWh of battery capacity was deployed globally in newly-sold passenger BEVs, PHEVs and HEVs, an increase of 69% year-over-year, according to a model-by-model build-up using Adamas Intelligence’s ‘EV Battery Capacity and Battery Metals Tracker’.

Among the NCM cathode family, NCM 622 saw a surge in deployment (in GWh) year-over-year, up 247% in April 2019 versus the same month the year prior. 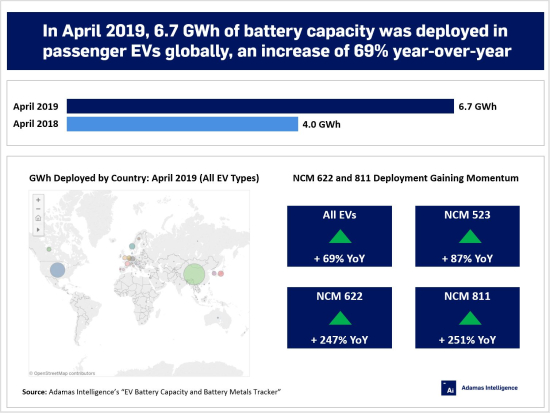 Similarly, the more widely-used NCM 523 cathode chemistry saw an 87% jump in deployment year-over-year, expanding its already-imposing market share at the expense of legacy cathode chemistries, such as LFP.

Lastly, in April 2019 the nascent NCM 811 cathode chemistry saw a blistering 251% increase in deployment year-over-year with the recent launch of the Geely Geometry A BEV and the BMW X1 xDrive25Le PHEV, the latter of which boasts an industry-leading 24 kWh battery and 110 km driving range (NEDC).

The cell supplier for both models is CATL.

Although NCM 811 currently claims just 1% of the passenger EV market by GWh deployed, its share is poised to rise further in the coming months with the release of the Nio ES6 BEV and the GAC Aion S BEV, both of which will also be equipped with NCM 811 cells from CATL.