A recent study has suggested a new strategy for storing hydrogen, using natural gas as a stabilizer.

The research proposed a practical gas phase modulator based synthesis of a hydrogen-natural gas blend (HNGB) without generating chemical waste after dissociation for the immediate service. A paper on the work is published in the journal Energy Storage Materials.

The research team of Professor Jae Woo Lee from the Department of Chemical and Biomolecular Engineering in collaboration with the Gwangju Institute of Science and Technology (GIST) demonstrated that the natural-gas-modulator-based synthesis leads to significantly reduced synthesis pressure simultaneously with the formation of hydrogen clusters in the confined nanoporous cages of clathrate hydrates.

This approach minimizes the environmental impact and reduces operation costs since clathrate hydrates do not generate any chemical waste in both the synthesis and decomposition processes. 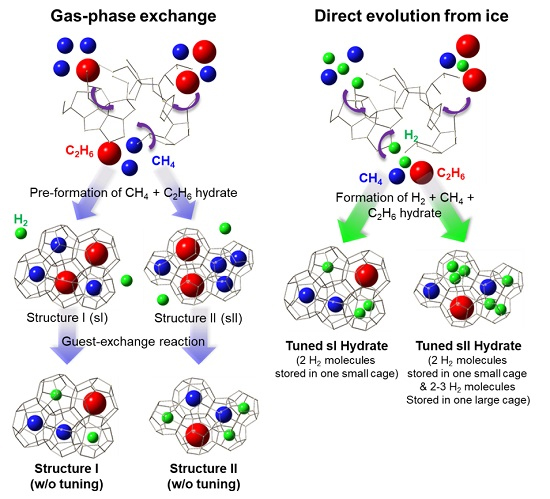 For the efficient storage and transportation of hydrogen, numerous materials have been investigated. Among others, clathrate hydrates offer distinct benefits. Clathrate hydrates are nanoporous inclusion compounds composed of a 3D network of polyhedral cages made of hydrogen-bonded host water molecules and captured guest gas or liquid molecules.

In this study, the research team used two gases, methane and ethane, which have lower equilibrium conditions compared to hydrogen as thermodynamic stabilizers. As a result, they succeeded in stably storing the hydrogen-natural gas compound in hydrates.

According to the composition ratio of methane and ethane, structure I or II hydrates can be formed, both of which can stably store hydrogen-natural gas in low-pressure conditions.

The research team found that two hydrogen molecules are stored in small cages in tuned structure I hydrates, while up to three hydrogen molecules can be stored in both small and large cages in tuned structure II hydrates. Hydrates can store gas up to about 170-times its volume and the natural gas used as thermodynamic stabilizers in this study can also be used as an energy source.

The research team developed technology to produce hydrates from ice, produced hydrogen-natural gas hydrates by substitution, and successfully observed that the tuning phenomenon only occurs when hydrogen is involved in hydrate formation from the start for both structures of hydrates.

They expect that the findings can be applied to not only an energy-efficient gas storage material, but also a smart platform to utilize hydrogen natural gas blends, which can serve as a new alternative energy source with targeted hydrogen contents by designing synthetic pathways of mixed gas hydrates.

This study was funded by the National Research Foundation of Korea and BK21 plus program.

This provides up to 22% hydrogen by weight , which is a great result, from the paper.

It is also intended to transport the hydrogen blended in the NG pipeline network, which can with modification handle that sort of mix:

It is intended to separate out the hydrogen at the hydrogen station to power cars etc.
https://drive.google.com/file/d/1f1Myiuc7rH7McRrviYW3KAvbn0Udsy5G/view

22% by weight?  Not mentioned in the abstract or article, and belied by the graphic.  A "cage" with 12 pentagonal sides each consisting of 1 water molecule has MW=216 of water associated with it.  It can contain a maximum of 3 hydrogen molecules, and a certain amount of CH4 or C2H6 is required to stabilize the structure.

Maybe you can achieve 22% H2 in the H2/CH4 mixture.  Note that this is only a bit over half the net energy present as H2, compared to CH4... and you still need something like 9 MPa (90 bar) of pressure to hold the structure.

So they want to use methane (85x as bad as CO2) the help store 'clean' hydrogen.? Ummm.

This research may be interesting to the eyes of a learned chemist; but, the bottom line is this process adds more carbon pollution to the environment. Better the research is redirected to renewable energy innovation which could prove to be equally as interesting to the chemical fraternity.

'Interestingly, however, increase in the amount of H2 (0 to 11.0 mol%) in the hydrate media was almost equal to the decrease in the amount of CH4 (42.9 to 32.5 mol%), and this implies that most enclathrated H2 molecules replaced CH4, which was mainly captured in 512 cages, driven by the difference in the chemical potential. The mechanisms of the replacement reaction of CH4 hydrate by CO2 molecules [40,41] or N2 hydrate by H2 molecules [28,31] have already been reported in the literature.
Surprisingly, when the ternary gas mixtures of CH4 + C2H6 + H2 were directly contacted with the ice powder (Cases II and IV), the amount of H2 was dramatically increased compared to that of H2 in the guest-exchanged hydrates (Cases I and III). The H2 compositions in the hydrate were 21.1 mol% and 22.4 mol% in Cases II and IV, respectively, even with the same ratio of CH4 to C2H6 in Cases I (7/3) and III (9/1). In view of these observations, we postulate that CH4 and C2H6 act as thermodynamic
promoters for H2 storage in hydrate, and the amount of enclathrated H2 depends on the ‘synthetic pathway’ even with the same feed gas compositions. At this stage, it is necessary to investigate the guest-distribution of all mixed hydrates synthesized in various pathways to shed light on this peculiar H2 inclusion phenomenon.'

IOW, they themselves don't fully understand why the take up rate is so high, and it surprised them too.

We could swap to all BEV tomorrow, and we would still be using loads of NG for electricity.

It is integral to our systems, and it is not going away soon.

Power to gas does offer at least the potential to reduce the fossil fuel element of this.

Power-to-gas is the mirage proffered as the solution to the gross unreliability (unfitness) of "renewables" to power an industrial economy.  It's the "alternative" to fossil fuels as the guarantee of energy availability when required.

The round-trip efficiency of PTGTP is quite low.  My estimate of the busbar-to-wheels efficiency of synthetic methane (E-gas) is ~79 MJ into the electrolyzer (carbon capture costs extra) per kg of CH4, which yields ~30 MJ in a CCGT power plant or ~15 MJ at the crankshaft of a natural-gas vehicle engine.  This requires somewhere between 2.6 and 5.3 times as much energy to be generated than is eventually provided at the point of use (again, omitting the energy overhead for carbon capture).

These huge losses in the system require the size (and cost) of the "renewable" generating apparatus to expand several-fold.  This will quite literally bankrupt any polity which attempts to force it.  This will lead to calls to "stay on the bridge fuel until the coming of the messiah\\\\\\\\\\\a good enough storage system."  And of course, it never arrives.

This is what the fossil-fuel interests are relying on.  It's a scam.

If you want decarbonization and energy security, nuclear energy is the only way for those countries not blessed with massive amounts of hydro.