In parallel with the advancing electrification of its fleet, Volkswagen Group and its brands continue to rely on CNG (compressed natural gas) as an alternative drive technology for decarbonizing road transport; Volkswagen Group[ has revised and expanded its product range again with this in mind. 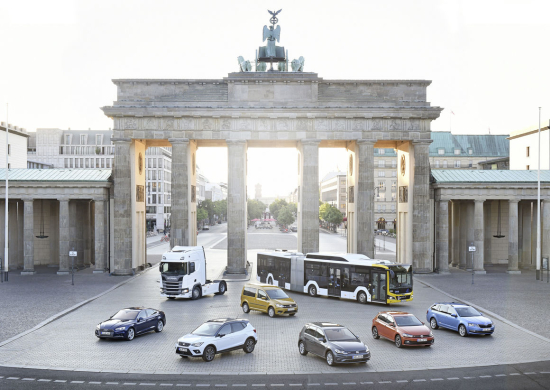 Volkswagen Group currently offers the widest selection of CNG vehicles of any manufacturer, by a substantial margin.

At the annual general meeting in mid-May 2019, Herbert Diess, Chairman of the Board of Management of Volkswagen AG, announced that CNG will continue to play an important role for the Group in the future.

Volkswagen is committed to the Paris Climate Agreement. CNG has an important role to play in the alternative drive systems strategy that runs alongside the Group’s electrification offensive. It is sufficiently proven, immediately available, efficient and cost-effective. Furthermore, CNG cars are not affected by driving bans in city centers.

Refueling with biomethane or e-gas results in an even better CO2 balance. Biomethane is obtained from organic residues, while e-gas is produced from excess green electricity (power-to-gas). Both can easily be fed into the gas network and mixed with any amount of fossil natural gas.

Volkswagen Group brands and their industry partners have been working in this field for some time; Audi has been operating the world’s first industrial power-to-gas plant in Werlte (Emsland) since 2013, with the Audi e-gas produced from wind power being fed into the natural gas grid. Green energy is made available to vehicle customers, while at the same time the storage of fluctuating eco-power and its research in practice enables the rapid expansion of wind and solar energy, which is also important to the success of e-mobility.

Volkswagen Group currently offers 17 models in various vehicle segments. Two more models will soon be added, in the form of the ŠKODA Scala, which will celebrate its world première as a CNG variant at the CNG Mobility Days in Berlin this week, and the ŠKODA Kamiq. The range encompasses everything from the small car segment through the compact class at Volkswagen, Audi, SEAT and ŠKODA, to Audi premium vehicles in the business segment and light commercial vehicles. With the ever-expanding CNG model range, sales figures in 2018 almost doubled compared to the previous year.

In the new CNG models such as the Polo TGI (66 kW/90 PS) and Golf TGI (96 kW/130 PS), the fuel tank has been significantly reduced in size, an additional CNG cylinder has been installed in the vehicles, and a quasi-monovalent CNG drive system has been developed.

This combination of factors represents Volkswagen’s response to many customers’ preference for increased range in natural gas operation—a fully established concept as seen in the long-range Caddy from Volkswagen Commercial Vehicles.

In addition, the VW Golf TGI and Golf Estate TGI (96 kW/130 PS) have been equipped with an engine optimized for CNG use, featuring particularly low fuel consumption, higher power output and improved engine output even at low engine speeds.

In the latest ADAC Ecotest, the Polo TGI proved that CNG models can be economical, clean and at the same time very attractive. It was one of seven models with the highest rating of five stars, and the only vehicle with a combustion engine in this group. With 95 points, it achieved the best result so far in 2019.

With the SEAT Arona 1.0 TGI, the Spanish company is the first manufacturer worldwide to offer CNG technology as a model in SUV format, the fastest-growing vehicle segment.

The new 2.0 TFSI engine from Audi, as used in the A5 Sportback g-tron for example, emphasizes that a CNG model can also be very sporty and dynamic. The power unit, which recently won the International Engine of the Year award in the 150 to 250 PS category, can also be used as a CNG engine.

For the first time, the MAN and SCANIA brands will also be reporting on the latest developments for trucks and buses as part of the CNG Mobility Days. According to the new emissions standards in the European Union, by 2030 CO2 emissions must fall 30% from 2019 levels—a goal that is virtually unattainable using conventional drive types.

CNG, which already has 15% lower fuel consumption than diesel vehicles, is an immediately available and usable alternative for trucks and buses. At present, a particularly persuasive argument in favor of using CNG—especially for haulage companies—is the exemption from tolls for natural gas-powered trucks.

Refueling with biomethane or e-gas results in an even better CO2 balance.

Biomethane is very scarce compared to fuel demands.  E-gas from H2 and CO2 is terribly wasteful; it takes half a kg of H2 to make 1 kg of CH4, converting perhaps 22 kWh of electricity (~79 MJ) to just 50 MJ of methane and then maybe 15 MJ of work at the crankshaft.

Does something that's less than 20% efficient look like a "solution"?  It sure doesn't look like one to me.

None of this is secret, but nobody talks about it.  It's a conspiracy, DELIBERATE INTENT to fail.

Have you been smoking POT? Ever hear of PTG (power to gas)? When renewables, e.g. in Europe, are producing over demand (and that is becoming increasingly the case during summertime), surplus energy is stored within possible limits or used to split hydrogen from water via electrolysis. This is far better than just wasting that surplus power. Sometimes the generated surplus power reaches such heights that the windmills and PVs are "switched off" and dirty coal and NPPs prevail. Audi is doing quite fair with PTG. That's far better than switching "OFF".

Ever hear of PTG (power to gas)?

Did you not understand the back-of-the-envelope analysis of E-gas that I did in the comment above yours?

Did you not understand the implications of sub-20% efficiency?  I will explain it, condescendingly and at length, if need be.  You've been here long enough that you should not require it.


Have you been smoking POT?

No, but I strongly suspect you have.

SAEP will never understand the NET value of REs and mass produced/stored H2. He will never admit that using clean excess REs to produce lower cost clean H2 is beneficial to the environment and health of all living creatures.

He would probably support a process using electricity from costly NPPs?

If only you knew what I am working on, AlzHarvey.

RNG from landfill has been used in trash trucks. Combine that with water treatment and farm digester product, we could offset the use of some oil.

Look at just how much LFG there is, SFG.  Compare it to fuel consumption for the area served.