Audi’s updated Q7 SUV will have the company’s 48V mild-hybrid system (MHEV) as standard. In customer operation, this technology can reduce consumption by up to 0.7 liters per 100 kilometers. 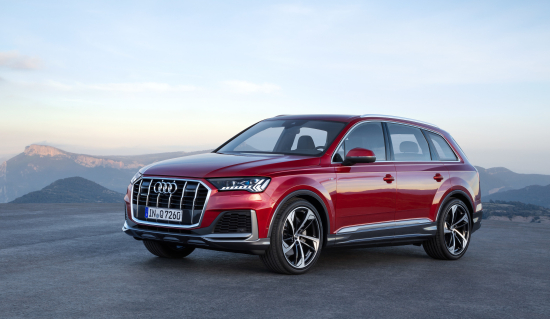 Its central component, the belt alternator starter (BAS), powers a 48-volt main electrical system in which a compact lithium-ion battery stores the energy. During braking, the BAS can recover up to 8 kW of power and feed it back into the battery.

If the driver takes their foot off the accelerator at speeds between 55 and 160 km/h (34.2 and 99.4 mph), the Audi Q7 recuperates energy, rolls in idle or coasts for up to 40 seconds with the engine switched off.

The BAS restarts the engine the next time the accelerator is depressed, and does so faster and more gently than a conventional starter. The start‑stop range begins at 22 km/h (13.7 mph).

A choice of two diesel engines will be available at market launch. Shortly after the market introduction in September, a gasoline unit, followed also by a plug-in hybrid model, will join the lineup. All of the engines in the Audi Q7 are coupled to an eight-speed tiptronic and permanent all‑wheel drive.

Audi connect and assist systems. The MMI navigation plus features LTE Advanced, a Wi-Fi hotspot, natural voice control and the extensive Audi connect portfolio. The latter ranges from traffic information online, navigation with Google Earth, to the hybrid radio. The cloud-based Amazon voice service Alexa, which is integrated into the MMI operating system, is also new. The same applies to the Car-to-X service traffic light information, which is being rolled out in stages in selected European cities.

Interconnection with the city’s infrastructure allows the vehicle to receive information from the central traffic light computer via a server, enabling the driver to select a speed to match the next green-light phase. The all-digital Audi virtual cockpit—and the optional head-up display—provide an individual speed recommendation as well as the remaining time until the next green-light phase if the driver is already waiting at a red light. The system thus contributes to a predictive and efficient driving style and facilitates a steady flow of traffic.

The adaptive cruise assist, which combines the functions of adaptive speed assist, traffic jam assist and active lane assist, reduces the driver’s workload—particularly on long journeys. In combination with efficiency assist it brakes and accelerates the Audi Q7 in anticipation of the conditions ahead. The emergency assist is also new: If the driver is inactive, the system brings the car to a stop and initiates protective and rescue measures. This function is active in assisted and manual modes.