Scientists from the Department of Energy’s SLAC National Accelerator Laboratory and Stanford University have taken the first images of carbon dioxide molecules within a molecular cage—part of a metal-organic framework (MOF), with great potential for separating and storing gases and liquids. 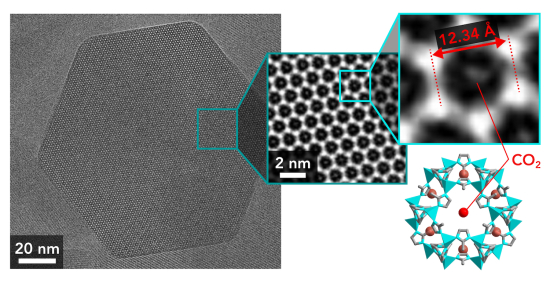 Cryo-EM (cryogenic electron microscopy) images show a slice through a single MOF particle in atomic detail (left), revealing cage-like molecules (center) that can trap other molecules inside. The image at right shows carbon dioxide molecules trapped in one of the cages—the first time this has ever been observed. Bottom right, a drawing of the molecular structure of the cage and the trapped CO2. (Li et al.)

The images, made at the Stanford-SLAC Cryo-EM Facilities, show two configurations of the CO2 molecule in its cage, in what scientists call a guest-host relationship; reveal that the cage expands slightly as the CO2 enters; and zoom in on jagged edges where MOF particles may grow by adding more cages. 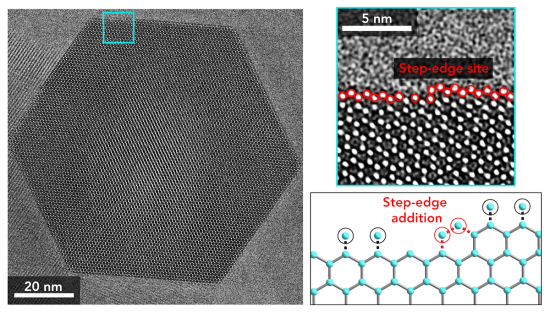 The research team, led by SLAC/Stanford professors Yi Cui and Wah Chiu, described the study in the journal Matter.

This is a groundbreaking achievement that is sure to bring unprecedented insights into how these highly porous structures carry out their exceptional functions, and it demonstrates the power of cryo-EM for solving a particularly difficult problem in MOF chemistry.

—Omar Yaghi, a professor at the University of California, Berkeley and a pioneer in this area of chemistry, who was not involved in the study

MOFs have the largest surface areas of any known material. A single gram can have a surface area nearly the size of two football fields, offering plenty of space for guest molecules to enter millions of host cages.

Despite their enormous commercial potential and two decades of intense, accelerating research, MOFs are just now starting to reach the market. Scientists across the globe engineer more than 6,000 new types of MOF particles per year, looking for the right combinations of structure and chemistry for particular tasks, such as increasing the storage capacity of gas tanks or capturing and burying CO2 from smokestacks to combat climate change.

According to the Intergovernmental Panel on Climate Change, limiting global temperature increases to 1.5 degrees Celsius will require some form of carbon capture technology. These materials have the potential to capture large quantities of CO2, and understanding where the CO2 is bound inside these porous frameworks is really important in designing materials that do that more cheaply and efficiently.

One of the most powerful methods for observing materials is transmission electron microscopy, or TEM, which can make images in atom-by-atom detail. But many MOFs, and the bonds that hold guest molecules inside them, melt into blobs when exposed to the intense electron beams needed for this type of imaging.

Cryo-EM is a version of electron microscopy, which was invented in the 1930s. In the mid-1970s, scientists came up with the idea of freezing samples to preserve the natural structure of biological specimens and reduce damage from the electron beam, and cryo-EM was born. The technology slowly evolved, and then a few years ago took a giant leap, thanks to significant advances in detectors and software. In 2017 three scientists were awarded the Nobel Prize in chemistry for their roles in developing cryo-EM.

A few years ago, Cui and Li adopted the method and used an advanced TEM instrument at the Stanford Nano Shared Facilities to examine flash-frozen samples containing lithium dendrites in atomic detail for the first time.

For this latest study, Cui and Li used instruments at the Stanford-SLAC Cryo-EM Facilities, which have much more sensitive detectors that can pick up signals from individual electrons passing through a sample. This allowed the scientists to make images in atomic detail while minimizing the electron beam exposure.

The MOF they studied is called ZIF-8. It came in particles just 100 billionths of a meter in diameter.

It has high commercial potential because it’s very cheap and easy to synthesize. It’s already being used to capture and store toxic gases.

Cryo-EM not only let the team make super-sharp images with minimal damage to the particles, but it also kept the CO2 gas from escaping while its picture was being taken. By imaging the sample from two angles, the investigators were able to confirm the positions of two of the four sites where CO2 is thought to be weakly held in place inside its cage.

Major funding for this study came from the National Institutes of Health and the Department of Energy.

Could MOF be tuned to store H2 for mobile and fixed usages?