Voltaiq, a developer of advanced battery analytics solutions, has released, in partnership with Total Battery Consulting, an industry survey examining many of the challenges and opportunities battery manufacturers, suppliers and integrators currently face.

The global battery industry is facing unprecedented growth and change. Over the next decade, as we continue the shift to an electric economy, we will see an increase in demand and production for lithium-ion battery technologies. Performance, capability, and reliability of batteries are paramount to industry growth, but there are significant challenges standing in the way. This survey sheds light on some of these challenges, and we hope it will kickstart a conversation on how to best address them to ensure the industry remains on a path to keep up with demand.

Conducted in Q1 2019, the survey polled professionals from a broad spectrum of industry segments, including battery cell producers, battery pack and component developers, academic and national labs, and companies involved in transportation, consumer electronics, and energy storage. While more than half of the respondents were located in North America, other regions, including Europe and Japan, were also represented.

Nearly 35% of respondents said that time to market was their biggest concern about their latest battery project. (Battery reliability was number two at 19%.) This survey sheds light on what might be hindering time to market. When asked to note the biggest bottlenecks in their workflow, respondents’ answers fell into three main themes: 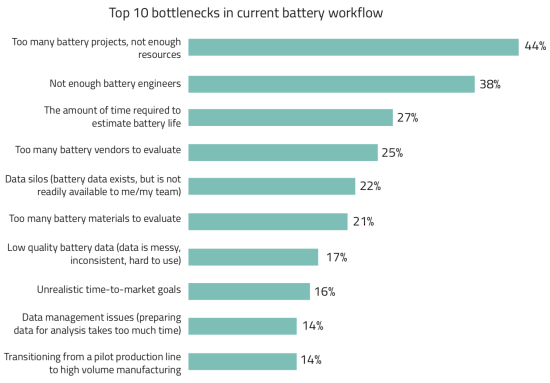