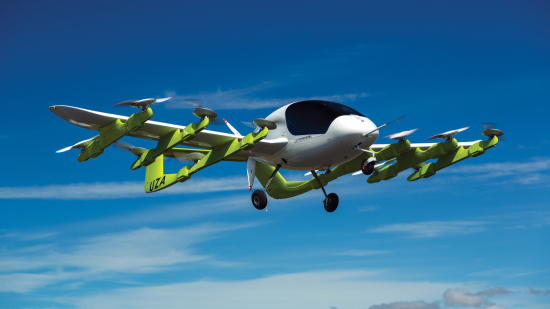 Cora is an electric, autonomous fully fledged air taxi that takes off like a helicopter and flies like a plane.

Working with a company like Kitty Hawk brings us closer to our goal of safely advancing the future of mobility. We have a shared vision of how people, goods and ideas will be transported in the future, as well as the safety and regulatory ecosystem that will underpin that transportation.

—Steve Nordlund, vice president and general manager of Boeing NeXt

Kitty Hawk Corp., headquartered in Mountain View, California, builds electric transportation solutions to free people from traffic and decrease carbon footprint. The company gets its name from the beaches of Kitty Hawk, North Carolina where the Wright Brothers took flight for the first time in 1903. The company’s portfolio of vehicles includes Cora, a two-person air taxi and Flyer, a vehicle for personalized flight.

Sebastian Thrun, Kitty Hawk’s CEO, was the founder of X (previously Google X), where he led the development of the self-driving car, Google Glass, and other projects. He spent several years as a professor at Stanford University where he led the Stanford Racing Team, whose “Stanley” won the DARPA Grand Challenge.

The agreement with Kitty Hawk Corp. is part of Boeing’s long-term strategy of entering into value-added partnerships that enhance and accelerate growth and deliver key differentiators for customers.

It amazes me that nonsense like this gets funded

None of the designs look all that good.