The benefits of living in a walkable neighborhood could be diminished by increased exposure to traffic-related air pollution, suggests a study led by St. Michael’s Hospital in Canada and ICES, a non-profit research institute that uses population-based health information to produce knowledge on a broad range of health care issues.

The open-access research, published in Environment International, and based on nearly 2.5 million adults from 15 Ontario municipalities, challenges the notion that living in walkable neighborhoods always improves overall health and well-being.

Walkability reflects how well neighborhoods afford opportunities for individuals to walk while performing daily tasks such as grocery shopping, running errands, or commuting to work.

Previous research has shown that individuals living in more walkable neighborhoods are more physically active, with downstream health benefits like lower rates of overweight and obesity, hypertension and diabete. But our findings confirm that walkability and air pollution are highly intertwined, potentially diminishing any health benefits derived from living in walkable, urban communities.

The research team found that living in unwalkable neighborhoods was associated with a higher likelihood of having diabetes or hypertension than living in the most walkable communities. But, any observed benefit for those living in walkable areas appeared to decrease—or in some cases, disappear—as the level of air pollution increased. 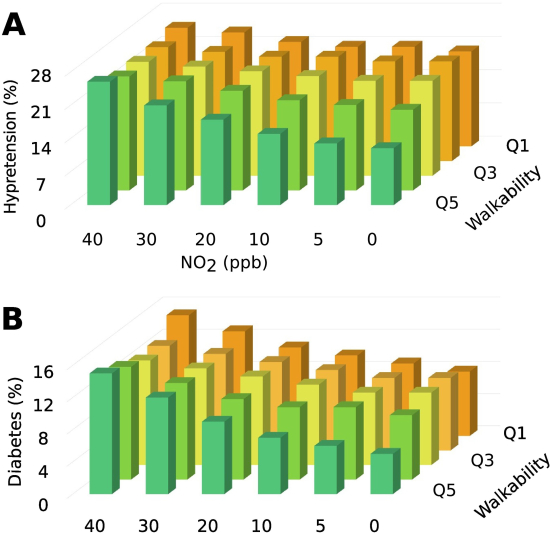 Individuals living in highly walkable neighborhoods tend to be more likely to choose active forms of transportation, like walking or bicycling, as an alternative to driving. So they may be more exposed to air pollution based simply on the amount of time they spend outside.

—Nicholas Howell, co-lead of the research

The researchers said these results suggest that policies aimed at encouraging the development of walkable neighborhoods should consider strategies to mitigate residents’ exposure to air pollution.

One more study confirming that our health is (negatively) affected by the environment we live in., even in Ontario.

Not really surprising, is it? No matter where on the surface of this planet emissions occur and in which form, they are finally evenly distributed in the atmosphere and waters so that everyone gets his share due to him. Just a matter of time.

@yoatmon
Not quite correct. Some emission components are relatively short-lived.

@ Peter_XX
Not quite correct. The first law of thermodynamics, also known as the "Law of Conservation of Energy and Matter", states that neither energy or matter can be created nor destroyed; energy or matter can only be changed or transferred from one form to the other. In modern physics you don't even have to differentiate between energy and matter because i.a.w. Einstein's equation E=MxC² everything is energy.
Of course it cannot be ignored that over time some of these emissions will react chemically with others and change their properties either for the better or the worse.

Well, it's pretty obvious. People who live in cities full of cars and/or factories suffer from more illnesses than people who live in the countryside. Heart problems, breathing, fertility. These are more frequent to happen with city dwellers. Click here to see male infertility treatment solutions. They do help but it's better to avoid disease than to cure it, isn't it?