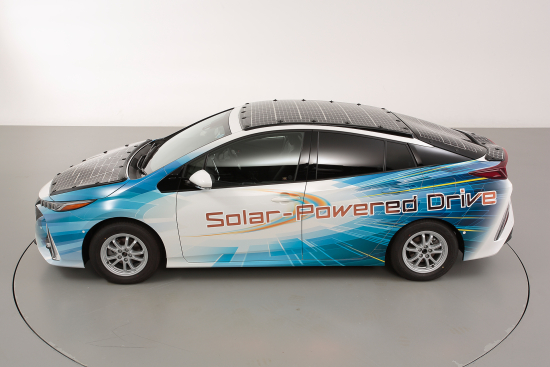 To facilitate the execution of this trial, Sharp modularized its high-efficiency solar battery cells (conversion efficiency of 34%+), previously developed for a NEDO-led project, to create an onboard solar battery panel.

Toyota installed this panel on the roof, hood, rear hatch door, and other parts of its Prius PHV and produced a demo car for public road trials. By enhancing the solar battery panel’s efficiency and expanding its onboard area, Toyota was able to achieve a rated power generation output of around 860 W—approximately 4.8-times higher in comparison with the commercial model Prius PHV (equipped with a solar charging system). 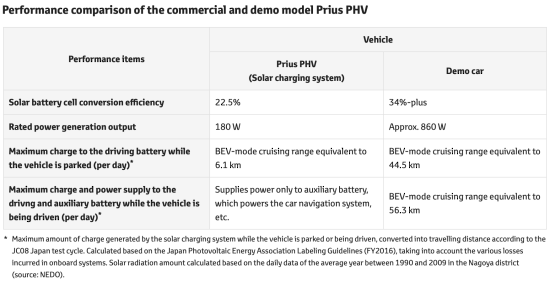 In addition to boosting its power generation output substantially, the demo car employs a system that charges the driving battery while the vehicle is parked and also while it’s being driven, a development that is expected to lead to considerable improvements in electric-powered cruising range and fuel efficiency.

Toyota plans to conduct the trials under various driving conditions in Toyota City, Aichi Prefecture, Tokyo, and other areas. Various data, including the power generation output of the solar battery panel and the amount the drive battery is charged, will be obtained and verified, and then used in the development of an onboard solar recharging system.

Toyota plans to share a selection of trial data results with NEDO and Sharp. The PV-powered Vehicle Strategy Committee, sponsored by NEDO and other entities, will evaluate the benefits based on improvements in CO2 emissions reductions and convenience, such as the number of times a vehicle requires recharging. The goal is to contribute to the creation of a new solar battery panel market, including the transport sector, and find solutions for energy and environmental issues.

Background. In April 2016, NEDO, a national research and development organization, set up the PV-powered Vehicle Strategy Committee, which comprises members from industry and academia. With the goal of finding solutions to energy and environmental issues in the transport sector, the committee’s research focuses on solar power systems. Sharp and Toyota are also active committee participants. The achievements the committee has made thus far include estimates on the potential to achieve an output of 1 kW in vehicles, despite the limited space for installing power systems, by using a solar battery module with a conversion efficiency of 30%+, zero annual recharging depending on usage patterns, and estimated benefits from a reduction in CO2 emissions.

Profile of demo car. The demo car is equipped with a solar battery panel that utilizes several solar battery cells with a conversion efficiency of 34%+. The shape of the module, environmental durability, surface materials, and other factors are based on specifications for driving trials implemented by Toyota.

The solar battery cell is a thin film about 0.03 mm in thickness. This makes it possible to efficiently install the film to fit the curves of parts with limited space, including the vehicle roof, hood, and rear hatch door. The rated power generation output of the demo car is approximately 860 W.

Previously, the Prius PHV charged the driving battery only while the vehicle was parked. However, with improvements in power generation output, the demo car employs a system that charges while the vehicle is being driven. This is expected to boost the BEV-mode cruising range and fuel efficiency significantly.

That kind of power would cover the aircon whilst driving, and when parked up in warmer places would actually make into reality the notion of driving on sunshine, which at the moment save for nightworkers is usually fairly fake.

I'd also note that energy going in to charge the battery is not heating up the car, so in hot places there is a double benefit.

It can give you 44 - 56 km solar power per (sunny) day, which is about the average driven km for most people - which is excellent.
I am impressed with the efficiency of the solar cell - 34% on a production vehicle (not in a lab or on a satellite).
However, I wonder how much it all costs - and would you be better just adding 1 - 2 KW of solar to your house any pushing the excess into a battery or the grid?
+ WHY do they call them solar batteries - they are batteries charged by solar power.
You could put this material on buses as well - reduce the power load on the alternator or battery.
In Summary, technically, it is excellent, I just hope it is affordable.
Well done Toyota!

The cars, may sit for 8+ hours per day in work parking lots,
this might be useful.

How about more information on the 34% conversion rate solar cells; are they in production? If so, that's a major breakthrough in the solar industry where production cells are below 20%.

In order to achieve 34% efficiency these solar cells have to be triple junction III/V type cells which means that they are a lot more expensive than silicon cells. There is a good reason people use concentration ratios of 500 when they are trying to use this type of cell for commercial power generation.

If they could just add a moveable solar panel to cover the windshield, it would put the car over the top for range while keeping the car significantly cooler.
I love this effort.... it is amazing.

With lower cost ultra light solar panels reaching 40%+ efficiency, it could become a valuable option, specially where e-energy runs as high as 30 cents/kWh.

An interesting looking experiment, however it falls short of PV area optimization. There is at least another 250W of surface area available.

A redesign to maximize the hood, roof and tail areas, along with windshield angle changes, would result in considerably more surface area for panels. Aerodynamic drag could be maintained at sufficiently low levels with careful attention. It's good to know that a raked windshield provides very little aerodynamic benefit, so a more upright windshield could leave more room for PV.

Even with conventional PV, it's possible to achieve 1KW of surface area. There were a few folks who came close.

This lends itself to an onboard charge circuit that can directly DC charge EV batteries from any external, properly configured PV array. No more converting PV power to AC, to power your charger that then converts back to DC. Purchase panels and plug them in.

Just wonder whether the auxiliary battery the article refers to would be a lithium-ion battery.

SO basically they copied the Lightyear One prototype?
https://lightyear.one/