Greenhouse gas emissions were examined for 17 nonstop flights with round-trip distances ranging from 131 miles to 19,040 miles. Among these flights were the three most frequently flown routes in the United Sates (New York to Los Angeles, Los Angeles to San Francisco, and Chicago to New York); the shortest flight that is code shared with a major U.S. airline (San Francisco to Santa Rosa); the longest flight within the continental United States (Seattle to Miami); and the longest flight in the world (New York to Singapore).

Average greenhouse gas emissions (carbon dioxide equivalent) per passenger from flying were obtained from an online emissions calculator at myclimate (a nonprofit spin-off from the Swiss Federal Institute of Technology). The myclimate estimates include not only the direct emissions from the combustion of jet fuel, but also the indirect emissions, such as those from refining and transport of the fuel, by adding 16% of the direct emissions. Furthermore, myclimate accounts for other warming effects of aircraft emissions (through changes in the ozone layer, initiation of contrails, formation of cirrus clouds, etc.) by adding an amount that corresponds to the direct portion of emissions. (A documentation for the myclimate calculator includes other aspects of the method used.)

The present calculations of the emissions per distance used the shortest flight distances as listed at Web|Flyer. The results for flying economy class are shown in the table below. The entries in the table are in decreasing order of distance flown.

Greenhouse gas emissions from round trips flying economy class. (For a city with more than one major airport, the code for the specific airport used in the calculation is in parentheses.) 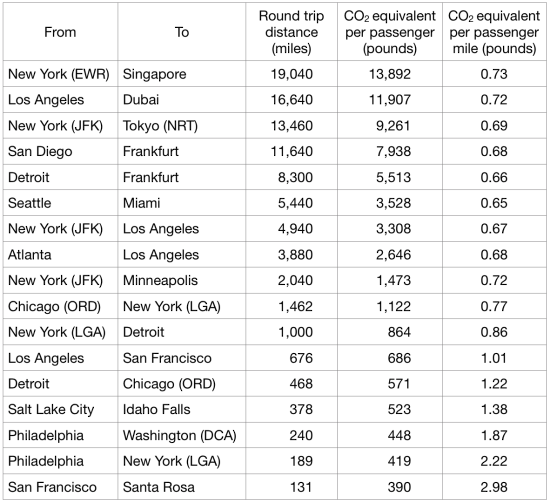 Carbon dioxide equivalent emissions per passenger for a round trip flying economy class range from 390 pounds for the shortest examined flight to 13,892 pounds for the longest flight.

Emissions per passenger mile flying economy class follow a U-shaped function. The minimum among the 17 flights examined—0.65 pounds per passenger mile—is for a flight with a one-way distance of 2,720 miles, which turns out to be the longest nonstop flight within the continental United States. (This is consistent with an estimate from the Worldwatch Institute that the most fuel-efficient distance is around 2,670 miles.)

Analogously, as the flight distance increases from 2,720 miles one way, so do emissions, but much more gradually. For the longest flight in the world (9,520 miles one way), the emissions per passenger mile are 0.73 pounds (12% greater than for the flight with the minimum emissions).

The main reason for the rapid increase of emissions per passenger mile for short flights is that planes use a disproportionate amount of fuel during takeoff. (One estimate is that on short flights takeoffs are responsible for as much as 25% of the total amount of fuel consumed.) An additional reason is that the aircraft models used on longer routes tend to be more fuel efficient compared with those on shorter routes.

The above data are for flying economy class. Because flying first class increases the amount of space per passenger, emissions increase substantially for first-class flying. (Also, first-class passengers tend to carry more luggage, and the first-class seats are substantially heavier than the economy-class seats.) For the examined 17 flights, myclimate estimates that first-class emissions increase about 3 times for all flights that are 1,940 miles or longer one way, and about 2.5 times for all flights shorter than 1,940 miles.

How do greenhouse gas emissions from flying compare with emissions from driving? It turns out that, in the United States, the occupants of light-duty vehicles (cars, SUVs, pickups, and vans) annually contribute, on average, 7,958 pounds of carbon dioxide equivalent.

The average annual carbon dioxide equivalent emissions per occupant of a light-duty vehicle (7,958 pounds) are about the same as the emissions per passenger from a round trip from San Diego to Frankfurt flying economy class (7,938 pounds), or from a round trip from Atlanta to Los Angeles flying first class (2,646 pounds times 3 equals 7,938 pounds).

Frequent economy class flyers and more so for business and first class are creating more GHGs than many expected?

Since short distances are 2 to 3 times worse, we should do like EU, Japan and China and move the short trip (below 1200 miles) flyers to ultra high speed e-trains and/or e-buses?

HyperLoops could solve this pollution problem for short to medium distance fast transportation...Hydrogen turbines in place of fossil fuel jet engines would solve the problem for long distance travel until hybrid fuel cells and electric motors can be developed. I'm pleased to see the concern for jet pollution is finally being voiced.

Airplane is gonna take off with or without you on board.
cars is a person's choice!

@ lad,
I think we've been shouting concern for over a decade but it's hard to get heard over the noise of jet engines.
So many problems but at least they do acknowledge the problems and are proactive
in approach and from early days at least not exactly 'in denial.
(the worlds military forces are high emitters and seem less relevant to ordinary garden variety humans but much prized you might say invaluable to the ruling classes)

Hydrogen turbines are also going to leave contrails.  Much bigger contrails than kerosene-burners, too.