Improvements to a class of battery electrolyte first introduced in 2017—liquefied gas electrolytes—could pave the way to replacing the graphite anode with a lithium-metal anode. The research, published in the journal Joule, builds on innovations first reported in Science in 2017 by the same research group at the University of California San Diego and the university spinout South 8 Technologies. 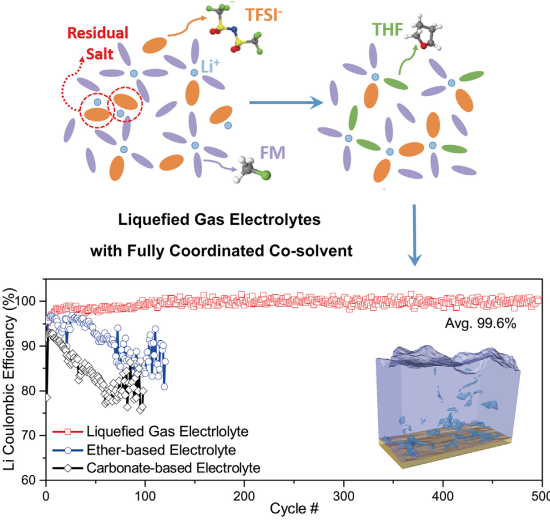 Finding cost-effective ways to replace the graphite anode in commercial lithium-ion batteries is of great interest because it could lead to lighter batteries capable of storing more charge, via a 50% increase in energy density at the cell level. The increased energy density would come from a combination of factors including the lithium-metal anode’s high specific capacity, low electrochemical potential, and light weight.

As a result, switching to lithium-metal anodes would significantly extend the range of electric vehicles and lower the cost of batteries used for grid storage, explained UC San Diego nanoengineering professor Shirley Meng, a corresponding author on the new paper in Joule.

Meng and colleagues’ approach was to switch to a more compatible electrolyte, called liquefied gas electrolytes.

In the 2019 paper in Joule, the researchers report on how, through both experimental and computational studies, they improve their understanding on some of the shortcomings of the liquefied gas electrolyte chemistry. With this knowledge, they were able to tailor their liquefied gas electrolytes for improved performance in key metrics for lithium-metal anodes, both at room temperature and minus 60 ˚C.

The recently developed fluoromethane (CH3F, FM)-based liquefied gas electrolyte enables dendrite-free Li-metal cycling with relatively high efficiency (97.5%) by forming a dense, uniform, ceramic-based SEI layer, composed primarily of LiF and Li2CO3. As demonstrated in this earlier work, the solvent itself, rather than the salt, plays a more critical role in stabilizing the Li metal. Additionally, the low melting point and low viscosity of these electrolytes enable low-temperature operation as low as -60 ˚C.

However, cell performance in this previously reported work was limited by the low salt solubility and the correspondingly high polarizations. In the present study, the limited salt solubility and high polarizations are resolved by introducing tetrahydrofuran (THF) as a cosolvent. The solvation structure and improved Li transport of the electrolyte are more thoroughly understood through a combination of experimental and computational techniques. Additionally, thorough analyses of the Li-metal morphology and structure of the SEI are carried out to understand the excellent stability, CE, rate capability, and low-temperature performance achieved by the new liquefied gas system with the Li-metal anode.

At minus 60 ˚C, the team demonstrated lithium-metal anode cycling efficiency of 98.4%. In contrast, most of conventional electrolytes fail to work below minus 20 ˚C.

The UC San Diego team’s simulation and characterization tools, many developed in the Laboratory for Energy Storage and Conversion led by Shirley Meng, allow the researchers to explain why lithium metal anodes perform better with liquefied gas electrolytes. At least part of the answer has to do with how the lithium particles deposit on the metal anode surface.

One measure of how densely lithium particles deposit on anode surfaces is porosity—the lower the better. The research team reports that porosity of lithium particle deposition on a metal anode is 0.90% at room temperature using liquefied gas electrolytes at room temperature. The porosity in the presence of conventional electrolytes jumps to 16.8%.

Meng is also the corresponding author on a related article in the May 2019 issue of Trends in Chemistry “Key Issues in Hindering a Practical Lithium-Metal Anode.”

This work was supported by South 8 Technologies under National Science Foundation NSF SBIR program (grant no. 1721646). Partial funding for the advanced characterization is provided by the Assistant Secretary for Energy Efficiency and Renewable Energy, Office of Vehicle Technologies of the U.S. Department of Energy under the Battery500 Consortium.

If so, it could be very beneficial to EVs used in cold weather areas.

Interesting; but, is it practical? We'll see.