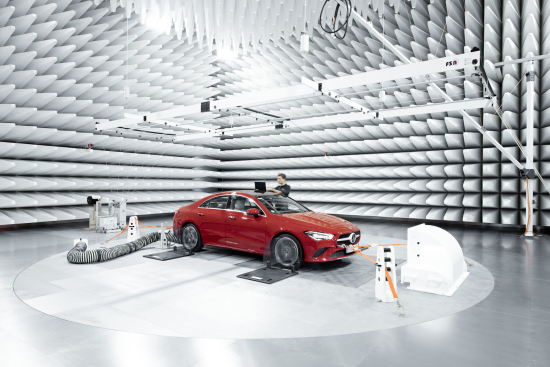 EMC Chamber - Capacity expansion by means of two additional EMC chambers with multi-receiver technology and the possibility to take measurements at all vehicle antennas simultaneously.

We are a pioneer in the digitization of the automotive industry. The new test facility for electromagnetic compatibility (EMC) and antennas is an important step to ensure we remain a pioneer. Because all four CASE fields of our corporate strategy—connectivity (Connected), autonomous driving (Autonomous), flexible use (Shared & Services) and electric powertrains (Electric)—require the transmission of data. In physical terms, all these data streams use electromagnetic waves as a means of transport.

—Sajjad Khan, Member of the Divisional Board of Mercedes-Benz Cars responsible for CASE

The measurements taken at the new facility contribute to:

Daimler says that the test facility at the Mercedes-Benz Technology Center (MTC) is one of the most advanced in the automotive industry. It sets standards for the comprehensive protection of the vehicles with new measuring and testing methods, which were developed together with the Technical University Ilmenau (Thuringia), the TU München and others.

A Mercedes-Benz passenger car can have more than 200 control units; an S-Class vehicle has more than five kilometers of wires. On one hand, the electromagnetic compatibility therefore must ensure that the electronics installed in the vehicle do not cause any interference that could disturb other vehicles or devices. On the other, there are a myriad of electromagnetic waves that reach a vehicle from the outside.

The cars therefore must be designed in a way that ensures that their electronics along with particularly important functions such as engine control and driving assistance systems are not impaired.

Thus, a vehicle from Mercedes-Benz undergoes many EMC tests before it gets an approval. The day-to-day operations with such tests in the EMC facility have already started at this central location.

In addition to the administrative wing, the building houses three halls for EMC tests and one especially large hall that rises three stories (length/width/height: 27/20/11.5 meters) for radio-frequency (RF) antenna tests. These halls use metal to provide complete shielding against outside interferences.

Another special feature of the antenna testing hall is the flooring: It has the same properties as a dry asphalt or concrete roadway and offers the possibility to be converted to a metal or absorbing floor and thus makes a wide range of realistic test set-ups possible.

The halls are equipped with turntables and chassis dynamometers for the vehicles to be tested in order to investigate signal interferences from different directions in stationary or moving vehicles. Cameras monitor the test set-ups in the test facility during a test. The developers sit in the operator room and are able to control and observe the measurements on the test rigs from there on monitors. 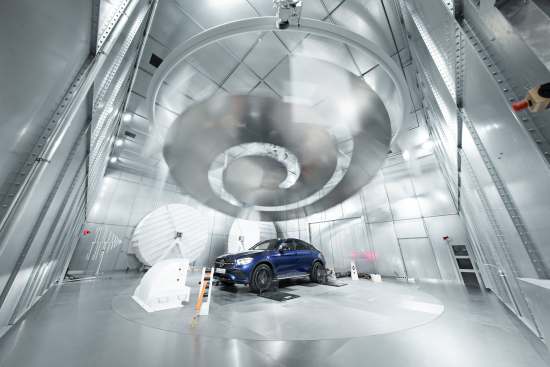 The reverb houses three large mechanical stirrers. These spiral reflector structures rotate at speeds of ten or 120 revolutions per minute, which constantly distributes the electromagnetic waves in the room. It is possible to demonstrate that this electromagnetic field distribution is locally equivalent to irradiation with an antenna from all directions.

In the past, the vehicle was bombarded sequentially with antennas from different directions and with different polarizations. In a major gain in efficiency, this is now done in the reverb very quickly as part of a single test step. Daimler designed the stirrer system in-house.

Realistic scenarios for antenna testing. Modern vehicles have more than just the classic radio antenna: They are equipped with antennas for radio broadcasts, mobile communications, navigation, WLAN, Bluetooth, and RF central locking system. They all need to be developed to achieve an optimal reception quality. Furthermore, the antennas may not interfere with each other. 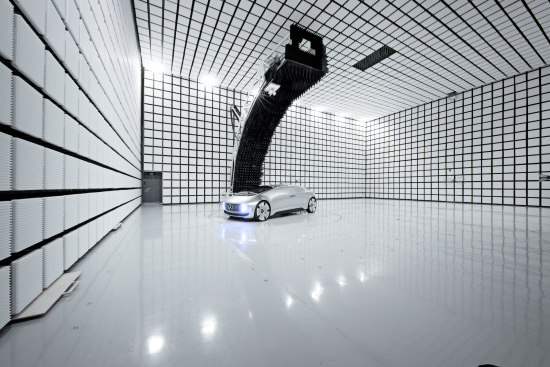 The new 5G mobile communications standard creates additional requirements. One antenna is no longer enough to physically achieve the future data rates. That is why two or four antennas are usually used simultaneously in order to make the high data throughput possible. In addition to the individual radiation patterns, this requires analyzing both the array of the various antennas—MIMO: multiple input, multiple output— as well as the receiver in the measurement technology.

Apart from classic antenna measurements, the antenna hall also allows conducting tests of such complex receiver systems as measurements of the data throughput. This is an important test set-up, as the reception in a moving car depends on many factors—e.g. the number of users in a cell or the location and the density of the transmission towers in a region. Trucks passing by and the buildings as well as the vegetation also can influence the data throughput.

The antenna specialists of Daimler, together with experts of the Technical University Ilmenau, developed a method that for the first time allows simulating such scenarios for a vehicle in a reproducible way, and measuring them. All globally available and future frequency bands and services can be emitted in the hall, which is crucial for mobile communications, navigation and for automated driving.

The new test facility for electromagnetic compatibility (EMC) and antenna systems is part of extensive expansions and reconstruction measures of the Mercedes-Benz Technology Center (MTC) in Sindelfingen. Among other things, a new technology center for vehicle safety (TFS), a new powertrain integration center, the driving simulator, the climatic wind tunnels and the high-tech aeroacoustic wind tunnel came online in recent years. The MTC is home to the headquarters of the company’s global Group Research and passenger car development, including design.